Posted by Eddie Pasa on April 1, 2022 in Movie Reviews / No Comments 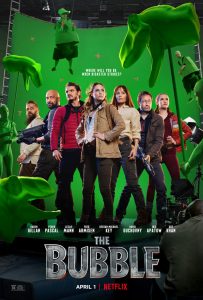 Leave it to comedy guru Judd Apatow to make a COVID-19 movie that feels as long as the pandemic itself. The Bubble wants to be subversive and timely with its commentary on our behavior during this time, but it comes off more like the guy who stayed past his welcome at the party and is now just knocking shit over because he thinks it’s funny.

Taking cues from This Is Spinal Tap, one of the original mockumentary films which didn’t shy away from painting its subjects in a light other than good, The Bubble seeks to do the same but falls woefully short. It follows a similar format – a bunch of skits and scenes put together to form a cohesive whole – but it’s not funny. Not in any sense of “We shouldn’t make movies about COVID!”, but more in the sense of “Watching a movie about spoiled actors, rotten studio heads, and everyone surrounding them should make me laugh more than seven times.” 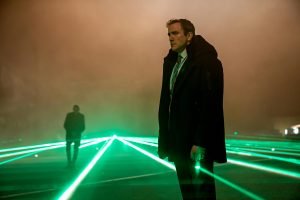 This is what we get when we confuse “movies” with “content.” We’re given quirky characters to latch onto who are then thrown about like ragdolls for our amusement while making funny faces and hoping their one-liners will stick. Sure, the throughline of a movie being made amid the pandemic and all of its pitfalls and speed bumps is enough. Watching pampered actors having to deal with quarantine and isolation while making a movie – scratch that – making a mindless Sharknado!-style franchise sequel that goes well past its production schedule and budget should be enough.

And yet, it’s not. It’s just a bunch of people being horrible to each other and to themselves. While the commentary hits the nail on the head as far as what complete asses we’ve been at times in the last two years, do we really need to relive it, even under the guise of entertainment? Do we need to see the TikToker make other people do an elaborate dance while they’re lifted up like Jesus on the cross? Are we willing to look at the me-first people some of us have become because they think they’re more important than the people working for them? 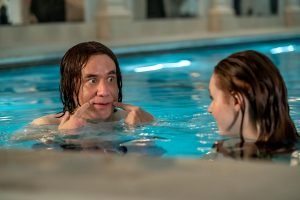 The Bubble uses every moment and trend from the last several years – deepfakes, COVID tests, the aforementioned Sharknado! series, the notion of indie film directors getting tapped to helm the next big blockbuster, the pointlessness of sequels, the overuse of CGI, and much, much more – and slams them into this bloated two-hour-plus movie that should have been a shorter and punchier comedy. There’s no denying that Apatow’s films tend to go long, settling comfortably into the various man-boy circumstances that have made his films comedy staples.

But where his other films had actors getting along and going along with the joke, this film intentionally has actors-who-play-actors not getting along for maximum friction. And there is no joke to go along with. There’s just people who get more frazzled as the shoot wears on, with everyone eventually getting on everyone’s nerves before coming to the big realization that they have to work together to get what they want, which is to be off the set for good. 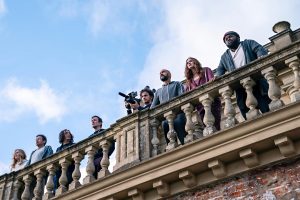 Look, I get it. The Bubble is a metaphor for our own lives during the last two years. The finger-pointing, the infighting, the behind-the-back talk we keep away from those we secretly don’t like, the trend of doing videos at home to reach out to people, and the need to come together as one… yeah, how could you not get it? If the film’s intention is not to make a joke of the virus, but to make a joke of ourselves, it doesn’t even accomplish that. It just piles on misery after misery until we’re begging it to stop… which is exactly what we’ve been doing for two years. So, yeah – as a backhanded bit of social commentary, The Bubble could be considered something of a success, especially since it makes me want to never go through it again.