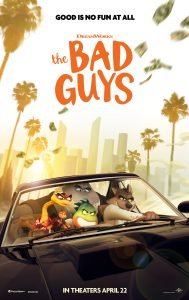 A children’s animated film which captures the snappy cool and dash of Steven Soderbergh’s Out of Sight and his Ocean’s Trilogy? I’m a sucker for heist films, so it’s not a question of “Sign me up,” but more “Give it to me. Now.” The Bad Guys – based on a series of children’s books by Aaron Blabey – is an immensely enjoyable, impeccably animated, and thoroughly satisfying film that ticks off all the required children’s-film theme boxes while still having room for style and swagger.

It’s a morality tale about five crooks attempting to walk the straight and narrow, but we all know how easy that isn’t. The best angle of The Bad Guys is that it doesn’t shy away from this ambiguity or ambivalence, acknowledging that people are fallible and screw up often. But it’s in trying to set things right and owning up to one’s shortcomings that makes this story feel a lot more… well, human. Which is, of course, strange – considering the five crooks are decidedly not human.

No, this heist crew – Mr. Wolf (Sam Rockwell), Mr. Snake (Marc Maron), Mr. Piranha (Anthony Ramos), Mr. Shark (Craig Robinson), and Ms. Tarantula, a.k.a. Webs (Awkwafina) – are literally a bunch of animals. And they’ve been at it for a while, as evidenced by a small fortune in stolen gold, cash, and other assets in their tunnel hideout off the L.A. River. But after doing a good deed and hearing a speech by philanthropist and inspirational do-gooder guinea pig Professor Marmalade (Richard Ayoade), Mr. Wolf starts thinking that there may be more to life than just being thieves and bad guys.

But much like the aforementioned Soderbergh films, the “good guys” aren’t always the ones you want to win. We’re here to root for the anti-heroes, the skilled fivesome that can beat anything they come up against. Impossible heists and bank robberies are nothing for this bunch, but turning one’s back on “The Life” and using those skills for more noble purposes? It’s not an easy transition, even with Professor Marmalade bailing them out of their biggest heist after Mr. Wolf throws it in favor of quickly changing his ways, dragging the rest of them with him, whether they want to do the same or not.

Etan Cohen’s script pops with smooth patter and Howard Hawks-like punchiness, always driving the plot forward but never losing sight of Mr. Wolf’s hope for redemption, especially when it comes to Diane Foxington (Zazie Beetz), a figurative and literal fox who also happens to be the state governor. (She might also have a secret or two kicking around – her perceived nonchalance regarding the crew’s film-opening bank heist seems a little out of place.) Cohen makes our ears dance whenever Mr. Wolf and either Mr. Snake or Diane get quippy, stick-and-move dialogue scenes that make this film crackle with surprising intensity and verve.

Pierre Perifel doesn’t waste a second with his directorial feature debut, showing a preternaturally adept sense of timing and smarts throughout. He knows precisely when to strike with action beats and tension or when to lay back and let us rest for a moment before getting back to the film’s inherent freneticism. There’s an ebb and flow here that allows for gears to be shifted rather than just chugging along at the same pace, which also gives the space for Cohen’s thoughtful script to launch and land solidly. Its themes of friendship, goodwill, and changing for the better are felt rather than told; it intuits with zigzagging emotion and intent rather than trying to hit us repeatedly with the morality stick.

Of course, the animation and voice cast have a lot to do with how well we perceive this movie. You can’t help but notice Mr. Wolf is dressed just like George Clooney’s Jack Foley in Out of Sight, nor can you avoid the kind of camaraderie that’s obviously cribbed from the Ocean’s crew. Fans of those films (and others like them) will easily take a shine to Sam Rockwell’s smooth voicings and Marc Maron’s jaded gruffness, hearing in them characters that have graced similar films in the past. That’s another part of the beauty of The Bad Guys; it’s not just a movie for kids with the feel-good lessons and the colorful images. People of all ages are welcomed into this world, as Perifel makes sure there’s something for everyone here and that we’re able to feel the good vibes this movie wants to throw at us.