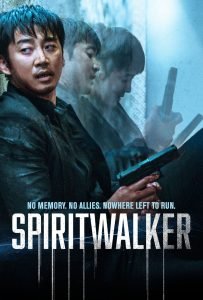 Imagine being whipped right into the bowl of a Kitchen Aid stand mixer while it’s running at full speed along with other ingredients; no purpose or recipe is known, but somehow, you’re going to find out soon enough what you’re making. That is how Spiritwalker works its thrilling magic – by not giving you any time to know anything about the plot or the characters that populate this world. By shoving you face-first into the mystery without the courtesy of a setup or even so much as a hint as to what’s happening.

Here’s what we know in the first five minutes: A nasty single-car wreck has occurred, a homeless man has scavenged anything valuable-looking out of the car and called for help, and a man lies bleeding outside the driver’s-side door. But to add a huge wrinkle to our confusion, the reflection he sees in the nearest reflective surface isn’t his. He has no idea who he is, where he lives – or, rather, where the person whose body he’s occupying lives – or any idea how he got there in the first place. And just when he figures some small things out, he doubles over in pain and stands up… as someone else in another place entirely.

It’s the ultimate in “in medias res,” a master’s thesis in amnesiac storytelling. Where films like The Bourne Identity and The Long Kiss Goodnight let us know almost immediately what we’re in for, Spiritwalker has absolutely zero f**ks to give about your perceptions and predilections toward needing to know everything right away. Lead character Ian (Yoon Kye-sang) has no idea who’s friend or foe; all he knows is that there seems to be an escalation in harm and criminal intent with each subsequent jump.

Director/writer Yoon Jae-geun harnesses this delightful feeling of being kept in the dark and uses it to such great effect while Ian traverses the city to find his girlfriend Jina (Lim Ji-yeon), aided only by Haengryo (Park Ji-hwan), a homeless man who might be the only one who believes Ian’s dilemma. One of the film’s more touching and touchstone moments is seeing Ian having to frantically identify himself to Haengryo – using a name specific to one of their conversations – while in one of any number of his bodies, especially during an action sequence or a scene involving tense exchanges with the people pursuing him, who may or may not be on Ian’s side. 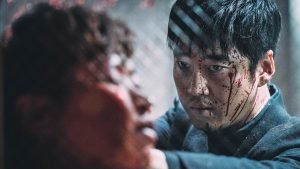 The film is a masterstroke in setting audience expectations and truly hurling us into the deep end, trusting that we’ll find our way to understand this movie, even before its big reveal explaining everything. Picture it as a cross between “Quantum Leap,” John Wick, and the aforementioned The Bourne Identity, with a little Inception thrown in for good measure. The elements driving the plot forward might seem like a disparate mix of these, but it doesn’t read like a retread or a ripoff. Spiritwalker is entirely its own original thing, relentless in its action and driving toward discovering its purpose and goal with a thundering fury. I honestly can’t wait to see it a second time with knowing eyes.