Everything Everywhere All At Once (2022) – Movie Review

Posted by Eddie Pasa on April 1, 2022 in Movie Reviews / No Comments 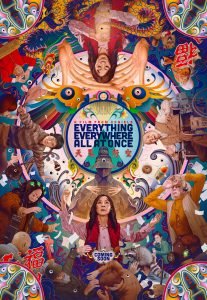 As a parent, I palpably felt the emotion and tilt of Everything Everywhere All At Once. This wondrous film about a put-upon family matriarch struggling to get by and to keep her house and business going may dress itself in the garb of a sci-fi fantasy adventure, but at its most vital, it is a story about who we become as adults trying to eke out a living.

Let’s take the title apart, shall we? Everything. Everywhere. All. At Once. Or All At Once. Parents are expected to be all of those words to their spouses, children, creditors, customers, co-workers, strangers, family, and friends. But who are they to themselves? Writers/directors Dan Kwan and Daniel Scheinert – collectively known as “Daniels” – take us on a thoughtful and exciting ride as Evelyn Wang (Michelle Yeoh) tries to discover this for herself. 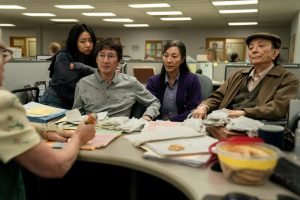 Evelyn’s under a pile of debt. The laundromat she runs with her husband Waymond (Ke Huy Quan) is in danger of closing due to unpaid taxes, and IRS inspector Deirdre Beaubeirdra (Jamie Lee Curtis) is breathing down their necks to collect. Evelyn and Waymond’s daughter Joy (Stephanie Hsu) is trying to reconcile her family with the fact that she has a girlfriend, which would almost certainly disappoint grandfather Gong Gong (James Hong). And to top it all off, there’s a sheaf of papers Waymond is hesitating to give Evelyn to sign, and it for sure ain’t a marriage renewal.

So many things pull at us as humans. If it isn’t our home lives, it’s our work lives. And if it’s neither of those, then there’s something else tugging at our hems and asking us to pay attention. Through harried pacing and slam-bang editing, Daniels make us experience just how chaotic life truly is through Evelyn’s eyes. And it doesn’t get any better when Waymond starts freaking out and acting like an agent on a mission from an alternate universe who’s trying to get her to fulfill her life’s destiny. 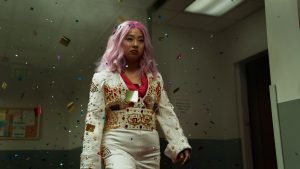 But what is her destiny? To be a mom to Joy? A wife to Waymond? A daughter to Gong Gong? Someone who pays what she owes the IRS? When does she get the chance to live out her dreams and desires? In his live improv before “Dancing Nancies,” Dave Matthews sings, “Could I have been somebody else? Don’t you ever wonder maybe if you took a left turn instead of takin’ a right, you might well be somebody other tonight?” This, essentially, is the multiverse, a theoretical world of different possibilities branched off as a reverse of the decisions we make.

It’s a Waymond from one of these alternate universes that seems to be slipping in and out of our prime Waymond. Half the fun is watching Ke Huy Quan transition quickly between the meek and timid version of Waymond to the take-charge man who gives Evelyn a chance to become the hero she’s meant to be. And wow, what a multiverse we’re thrown into! We see the different ways Evelyn’s life could have played out – as a Chinese opera performer, a movie star, a chef in rather familiar circumstances, a woman with long sausages for fingers (who’s married to Deirdre in this alternate universe), or even an inanimate object, whose speech is notated by supertitles. 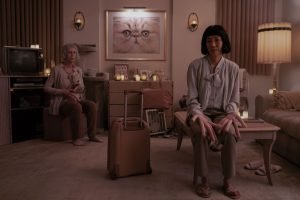 But in all of these universes, the one constant that remains is the love that makes us go the distance for each other. Whether it’s absurd, painful, wistful, joyous, or melancholy, we take it upon ourselves to do the utmost for those we love, exhausting every last possibility before even thinking about giving up. The whole of the film warps Evelyn through different dimensions to show her family that she’s willing to do anything for them. She’s far from being a happiness pump; she’s merely trying to make sure those she loves are taken care of, and that they know she loves them.

Michelle Yeoh, long given secondary or sidekick roles in American cinema, breaks our hearts as the centerpiece of Everything Everywhere All At Once, words which she truly encompasses and embodies. Her performances as multiple Evelyns are a crowning achievement of temerity and strength, finding the common thread between all of them and binding them together in their hearts and souls. Turning from the under-the-gun prime Evelyn to fighting for herself in each universe in every way, not just in martial arts terms, is a feat that few actors could pull off. Here, Yeoh does it beautifully with such nuance, grace, and bewilderment without ever feeling unnatural. 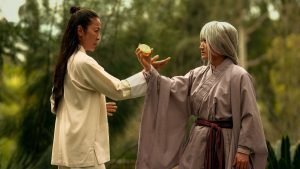 Daniels throw the kitchen sink at us, flinging us at a moment’s notice into any of Evelyn’s universes. We’re slow-rolled into thinking we’re about to watch a woman’s slide into destitution, but as soon as Waymond starts acting funny, the chocks are cast aside and we’re off at a million miles an hour in the search of Evelyn’s ultimate truth about who she is to herself and everyone around her. Truly limitless imagination is on display here, folks, and if we whine about unoriginal stories and storytelling and don’t pick up on Everything Everywhere All At Once, we’re fools that deserve the mediocre.

MPA Rating: R for some violence, sexual material and language. Running time: 139 minutes. Released by A24.
Posted in Movie Reviews