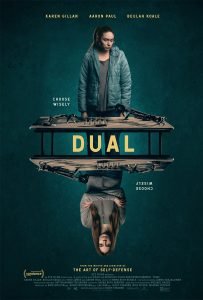 Director/writer Riley Stearns’ Dual brings to mind “The Replacement,” a fairly decent episode of “Buffy the Vampire Slayer” in which one character is suddenly cloned and witnesses the clone living his life better than he ever did. The film also calls up shades of Robert S. Fiveson’s The Clonus Horror (and Michael Bay’s alleged [gotta stick that in there for legal purposes] remake, The Island), concerning itself with purpose-made clones farmed for spare parts for the wealthy. Dual doesn’t go to that extreme; it leans more toward the examination of identity and the effect one has on others that the BtVS episode humorously covered.

Stearns has a lot more going on, dealing with humanity and how we’re to look at clones – as human beings or the replacements made to replace those human beings in death. In Stearns’ vision of a not-so-dissimilar-to-now future, only those with confirmed diagnoses of terminal health conditions resulting in death may choose to have themselves cloned so they won’t miss a day of work (necessary to pay off the cloning program’s exorbitant cost) or time with their loved ones. This fully-grown, sentient clone – known as the “Double” – is given as much time between when they walk up to their sponsor (known as the ”Original”) to meet them for the first time to when the Original dies to learn how to behave, walk, talk, and live like their Originals for a seamless transition when they die. 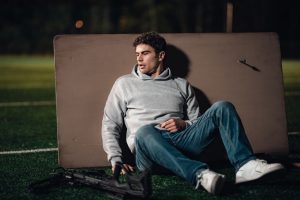 Sensational, isn’t it? Even more sensational is what happens when an Original’s diagnosis is reversed or if they go into complete remission, thus voiding the need for the Double. But the Double’s a human being, right? A living, breathing human being who’s developed relationships with the Original’s friends and family. A human being who might not want to be “decommissioned,” as it’s so dehumanizingly put. As part of the contract, the Double has a right to make the choice not to be put to death; the rules stipulate that a year must pass after the Double’s formal decision to live before both Original and Double are put on a field and given a table of weapons. Stating the obvious, the duel (title homophone FTW!) to the death – televised, natch – will decide which one gets to stay alive.

This whole movie is about the loss of humanity. We hear it in the way Stearns writes the failing relationship between Sarah (Karen Gillan) and Peter (Beulah Koale); we see it in the offhand, detached manner Sarah’s doctor gives her the bad news about her sudden onset illness which causes her to sporadically vomit blood; and we witness it in the film’s prologue which features one of these deathmatches. While the cloning program thinks it’s promoting humanity, it is decidedly not, taking the normal stages of loss off the table and defying human life cycles for profit and a false sense of comfort. (Pay close attention to the end of the cloning promo video Sarah watches; there’s a moment where a person’s body language demonstrates the true effects of this “replacement” and who it really benefits, and it isn’t the grieving.) 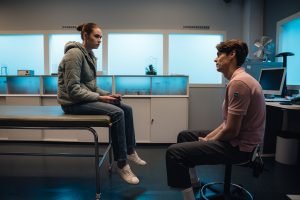 But Sarah starts to take a backseat to her Double, who reignites a spark with Peter and is fitting in better than Sarah was prior to her diagnosis. Sarah’s pushed further into irrelevancy and redundancy, almost the opposite of how she’s supposed to be spending her final days. Karen Gillan makes Sarah an almost non-essential part of everyone’s life, including her own, playing her as an indifferent woman who has no tone or joy. As Sarah, Gillan barely rises above a flat conversational tone, barely existing in her apathetic world and shrugging off the prospect of oncoming death.

As Sarah Double, Gillan injects her with brio and vivaciousness, a literal 180° from Sarah – someone who’s present and looking for the next big adventure. Also, Stearns writes Sarah Double with an innocent awkwardness which is a double-edged sword to Original Sarah. The descriptions she gives to Original Sarah of what she and Peter are going to do on a date might stem from a lack of social grace, or is it humblebragging and gloating? Gillan walks this very fine line with pinpoint accuracy in her delivery, carefully choosing her emphasis and timing to make us think it could be either. She is truly a marvel in this film, and she carries the weight of the film and her characters’ predicaments with practiced nuance and depth. 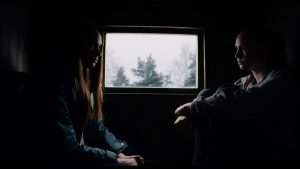 Stearns leans into the absurdity of this situation but doesn’t go out of his way to make it any more absurd. He keeps it as grounded as possible, even when Original Sarah’s combat trainer Trent (Aaron Paul) takes his non-monetary “payment” for his services. You’ll see what I mean when I say that Stearns doesn’t need to push it into the violent and the horrible; it’s already a horrible circumstance, but there’s still some fun to be had. Yet Stearns never loses sight of the bigger picture and his themes regarding how humanity has turned a corner into apathy and dissociation. Almost every character in Dual is acting purely out of their own interests, and it’s a frightening thing to see this exaggerated extreme being used to show how our wants dictate a person’s usefulness to us.