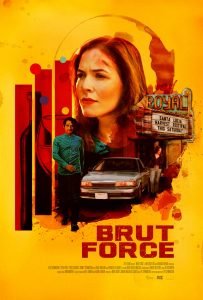 It takes some time to settle into director/writer Eve Symington’s Brut Force, a quick-moving mystery set in California’s wine country. And why shouldn’t it take its time? Symington’s choice of milieu is a character in and of itself, a beautiful façade that hides dark secrets and histories. Basking in these views also serves to disarm and soothe us a bit while setting up thick tension among its principals, exposing both superficial and consequential conflicts (whether red herrings or not) which provide the juice for Symington’s detective story.

Instead of a cigarette-smoking detective, we’ve got tough-as-nails ex-reporter Sloane Sawyer (Lelia Symington), who’s first glimpsed walking smugly away from her office with her knuckles bloody and a bruised co-worker (or superior) screaming at her. This fantastic, dialogue-less setup lets us know immediately she can hold her own and won’t put up with trifling bullshit. It’s enough to get us through the first two acts, even though Sloane’s full story won’t get told until the final frames; Eve Symington writes and directs Sloane to be a tough customer, never letting down her guard until it’s absolutely necessary.

When she returns to her vineyard home where her widowed stepfather Arthur (Sidney Symington) runs operations, old friend Juana (Lilian Tapia) tells her of someone harassing the immigrant workers. Dead animals are found in their beds, they are shadowed by unseen figures in the vineyard, and – right when Sloane returns to town – a housing facility Arthur’s building for his migrant workers is mysteriously set afire. This blaze also seems to have claimed one of Arthur’s workers, Dulce (Vico Escorcia), who served as Arthur’s right-hand woman.

Eve Symington gives Brut Force a bit of a Chinatown vibe, with the hard-charging outsider following disparate clues which reveal the shadier side of the town’s dealings. The flat tires Sloane receives while investigating almost become a running joke, but it confirms she’s onto something, whether it’s in following the NIMBYs who didn’t want the housing facility in their neighborhoods or teaming up with Tico (Tyler Posey), who’s also looking for Dulce but might have some secrets of his own. And one discovery only leads to another; just when she finds the culprit behind the harassment, it only opens up a whole other world of betrayal and a longstanding rift that threatens to spell doom for two rival vineyard owners.

Brut Force has a lot on its plate. Its themes cover the disdain of migrant workers by the people who want the fruits of their labor while thinking it’s completely acceptable to other them; the specter of stolen land and the lengths to which one will go to regain it; family allegiances coming at unfathomable prices; and corruption which lends no one justice. But with all of these and more, Eve Symington keeps an assured hand on the tiller, marching Sloane proudly and bravely through her investigation, no matter if what she finds doesn’t paint her stepfather or her family in the best light.

While some plot elements and devices may seem overfamiliar, they’re only a gateway into a decidedly horrific side of humanity. The notion that we’re only useful to a point and that human lives are just there to appease the moneyed has never been made plainer than in the last several years. Eve Symington brings it down to the microcosm of California wine country, a place where thinly-veiled racism passes as “genteel,” with people shrouding their bigotry in the guise of “safety and security.” The workers are just there to be toyed with, their families used as pawns in cruel games; yeah, we’ve seen a lot of that coming out of Washington, DC in the recent past. But where Brut Force makes its statement is in its want for truth and justice, and Lelia Symington stands tall as Sloane in her quest to get both.

Not Rated by the MPA (contains some violence and light profanity – equivalent to PG-13). Running time: 93 minutes. Released by XYZ Films.
Posted in Movie Reviews