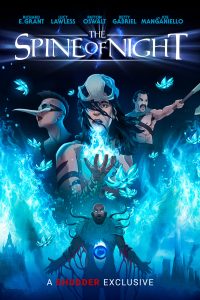 The Spine of Night is a film that lives in the animated sequences of Panos Cosmatos’ Mandy. Very dark, brooding, mythic, violent, colorful, and nastily unforgiving. The good do not flourish here; only those with power stand a chance at existing in this world. Even more so when said power comes from a supernatural plant, rumored to have come from the blood of gods.

This film, which achieves its spectacle through striking hand-drawn computer animation, wastes no effort in spinning a thick yarn, quick enough to be set up and executed within its 93-minute confines. Co-directors/writers Philip Gelatt and Morgan Galen King seem to effortlessly sink us straight into this fantasy world of magic and corruption, introducing us to our linchpin characters with breathless ease and bravura tact. 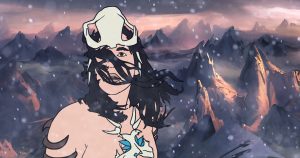 Straight away, we’re shown we have no idea what kind of story we’re in for, as a naked woman – adorned only in a headdress and a bone necklace – trudges up a snow-covered mountain toward a large skull, presumably part of the remains of the gods who left the aforementioned plant on this planet. Encountering a gold-masked guard (Richard E. Grant) who stands watch over a lone, glowing flower, she sets the tale in motion, reaching back to her time as the queen of a primitive swamp-dwelling tribe.

This woman, Tzod (Lucy Lawless), commands the power of the plant, whether it’s through fire (which allows her to see the future) or using it to heal. But soldiers from a nearby advanced civilization have arrived to carry out their extinction of this swamp tribe, taking Tzod – and the plant she wears like a lei – into their custody as her people fall dead around her. While imprisoned, she meets scholar Ghal-Sur (Jordan Douglas Smith), who seems like an open, inquisitive sort. That is, until he chances upon an opportunity to take the plant for himself. 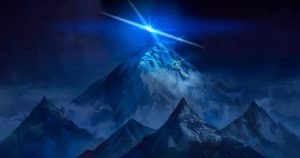 Gelatt and King lean heavily into the boundless limitations of their animated world with bold visuals, going to great lengths to show how the hearts of men are all too freely corrupted by a power so readily easy to take. Possession of this plant – an inanimate organism that doesn’t judge, influence, or fight back – comes only to those who resort to violence for its retrieval. This metaphor for the fallible wills and misguided strengths used to obtain power at any cost speaks loudly of our present day, where those who seek authoritarian rule are shown doing so wantonly and without consequence.

This is a story that could be told no other way except through animation, which bears a look similar to the exaggerated styles of Ralph Bakshi, Frank Frazetta, and Katsuji Morishita. Hyperactive lines of definition detail each character’s face and body, and bloody dismemberments and gory disfigurements – most disgustingly exemplified by the burn damage Lord Pyrantin (Patton Oswalt) sustains – hold nothing back. It’s a brilliant throwback to techniques we haven’t seen in a long time, and Gelatt and King don’t hesitate to go hard by punctuating Tzod’s story with graphic and violent realism. 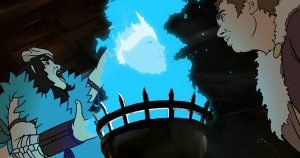 Throughout the film, we’re also given the mythology which builds this world, where indigenous tribes more in tune with the land and its history are met with brutal force by colonizers who only want to spread their realm.  It’s not that far of a stretch to see parallels to our own history, where entire races and ethnicities have been wiped clean from the earth. To see it portrayed with the kind of straightforward cruelty that The Spine of Night bears can be alarming, but it is a fantastic visual reinforcement of the adage “Absolute power corrupts absolutely” and what it takes to rebel against those who seek to smother and destroy.