Jordan Peele’s Get Out was a turning point in Black cinema, unafraid to express the frustrations people of color feel when marginalized and trivialized. It also pushed themes of racism to the other end, concerning itself not with outright bigots, but with those whose nice veneers gave way to more sinister wants and ideals. So, too, does writer/director Mariama Diallo’s Master, but on a more devastating level by taking place in a more universal milieu.

Diallo doesn’t want to just examine race relations and tensions; she wants to get to the bottom of the ongoing theft of Black culture, voices, identities, stories, and lives. Throughout the film, we see how Black history has been tainted, reshaped, and reframed to other the Black community. What’s worse is that what she shows us are behaviors and microaggressions people of color see on the streets and in our professional spaces every day. Even more damning is the hopelessness we feel when facing this tide, in that no one seems to care and that the cycle perpetuates itself.

These experiences Diallo details with grim exactness might seem out of proportion to the average viewer, but to those of us who have known the kind of challenges both professor Gail Bishop (Regina Hall) and college student Jasmine Moore (Zoe Renee) run up against, they’re smarting wounds. We’re expected to take whatever abuse or bigotry expressed in seemingly “normal” exchanges with people who try to identify with our lived truths, only to reveal the stereotyped thoughts they harbor. 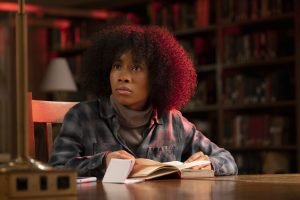 For instance, when Jasmine goes to her dorm room to find her roommate’s friends sitting on her bed, she’s asked to just accept it, like her space doesn’t matter to these people. No one gets up when they see her or shows any kind of respect for her personal space; they just stay put. And when she’s asked who she is, her roommate doesn’t speak up; instead, someone approaches her and spouts off a list of female Black entertainers she looks like. “Beyoncé… Rihanna…. Lizzo,” this white man says. He doesn’t even ask her name – he just rattles off these Black celebrities like it’s supposed to be a compliment.

What Diallo does with Master is expose how people of color are seen and handled. “Handled” is too appropriate a word for the Black women at the center of this story. The college legend has turned a suicidal Black woman into a mysterious witch who takes anyone who dares to live in a certain room. Two women are roughly interrogated by authority figures on suspicion of theft or just daring to be walking in public. Conversations stop when they walk into rooms where white people are congregating as if they’ve rudely interrupted and heard something they weren’t supposed to hear simply by being where they were supposed to be. 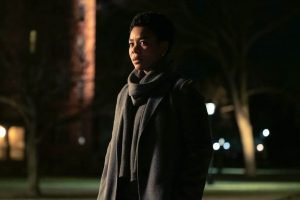 Another dimension of this film’s horror is exposed in the film’s denouement, which also speaks of the cyclical, self-fulfilling nature of this college’s racist underpinnings. Hints preceding this revelation are seen throughout, and they also take the shape of the microaggressions both Jasmine and Gail receive. But the implications of this turn of events lays bare the deep veins of normalized racism and bigotry that run through this college campus, a place where we’re supposed to be learning to change the system, not be part of it.

While Master might come off as heavy-handed to those who don’t know or don’t care, there’s truth in every scene that people of color will shake their heads at and say, “Yup. That’s happened.” As an Asian, I’ve put up with people yelling “Jet Li!” or “William Hung!” or “flied lice!” at me. I have been followed around stores while white people go unmonitored. I’ve been told, “Go back to where you came from.” At my Catholic school, teachers wondered why I wasn’t good at math, or if my father taught me kung fu when I got in trouble for fighting. These are small speed bumps compared to what Black people have had to put up with for generations.

This movie takes every opportunity to portray supposedly routine actions like these for maximum discomfort. For some, the discomfort comes from acknowledging the horribleness of these scripted actions; for others, the horror comes from having experienced these actions, knowing that it’s not as scripted as one would think. Mariama Diallo’s Master is one of the first movies which shows how far we’ve come by showing how far we haven’t come in regard to race relations, and how much more work we have to do to rid ourselves of racism’s bloody stain.

MPAA Rating: R for language and some drug use. Running time: 91 minutes. Released by Amazon Studios.
Posted in Movie Reviews