Posted by Eddie Pasa on March 4, 2022 in Movie Reviews / No Comments 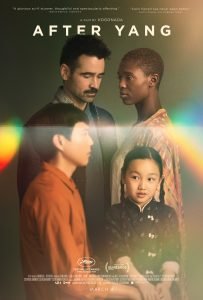 The solemn and pensive After Yang resounds with sadness and grief; yet it is a celebration of loved ones passed on. We mourn because of the hole they leave in our lives, but they are also the cause of healing and renewal. Based on the short story “Saying Goodbye to Yang” by Alexander Weinstein, director/screenwriter Kogonada whispers this tale of loss in the muted tones of wakes and funeral services while declaiming its sense of love in earsplitting volumes. A dichotomy like no other, to be sure. But the cast and tone of After Yang do not need raised voices to achieve power or to show it; they merely accept and work together, whether it’s their circumstance or each other requiring this film’s brand of care and attention. And it’s not that there isn’t drama; here, we cut through to the human and thoughtful, not needing the kind of titillating, histrionic kind of drama you’d think would be part and parcel of a film like this.

There isn’t any backstabbing or betrayal driving the story – just love and a race to preserve the only salvageable part of our deceased loved ones: memories. After Yang takes this notion a step further and reverses it; it’s not our memories of the deceased, but the deceased’s physical memory that’s at stake. Robot caretaker Yang (Justin H. Min – bought by Jake (Colin Farrell) and Kyra (Jodie Turner-Smith) to be a big brother for their adopted Chinese daughter Mika (Malea Emma Tjandrawidjaja) – has suffered catastrophic failure, prompting Jake to try and repair him before he starts decomposing. And when that’s not possible, Jake goes to great lengths to extract Yang’s hard drive to save his memories. 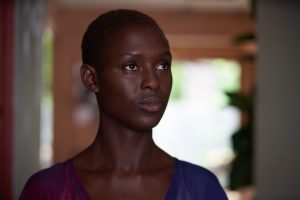 As humans, when loved ones are taken away by death, great questions remain about their intentions, thoughts, dreams, and other various unknowns. Here, all of that is readily accessible, thus saving the family from this particular set of uncertainties. But different concerns – how to live without them and how the chasm where they once physically and mentally occupied our homes, hearts, and minds will be healed – are raised and examined through this curious detachment. Yang is not a flesh-and-blood relative; he’s something bought from a store. A second-hand store, at that. His life expectancy should have seen Mika into at least her teenage years; as we find out, he wasn’t the first family to be so positively and wonderfully affected by his eagerness to learn and his capacity for love and wonder. Half of the movie is spent showing what Yang means to Jake, Kyra, and Mika; the other half involves getting to know how he touched other families during his time among humans.

It’s established that Jake is a man who tries to fix things, even if what’s being asked of him is beyond his ken. An encounter at his tea shop with a woman who’s looking for something he doesn’t carry depicts his willingness to try anything to set things right, even if it’s something he has no experience with or cannot understand. When faced with losing Yang, he turns to warranty-voiding measures (an odd objection that gets raised a few times to subtle comedic effect) to get things back on track. And when even the back alley-est of back-alley repairmen can’t help, he goes further to make sure Yang’s physical afterlife is shown respect and honor. 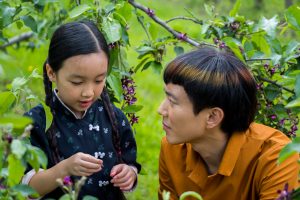 Kogonada toys with shifting aspect ratios – 2.40:1, 1.78:1, and 1.33:1 – to delineate how we’re to experience the unfolding mystery of Yang’s existence. The wider frame is used for the third-person narrative showing events as they occur; the screen-filling 1.78:1 frame shows us Yang’s point of view; and the square “Academy ratio” is claimed for two-way communications. That’s another curious thing about After Yang; we’re to believe we’re in a future where sentient, lifelike robots walk among us and are used as companions, but we never see the outside of a car (although quite a few scenes take place in a conveyance’s interior) or the telecom devices used for these video chats. Exterior shots smack of Asian design and tone, but we’re not given any information about this bottle universe to fully define our settings.

But this story isn’t about cities or countries; it’s about how we carry our loved ones past their time with us. The absence of Yang hits everyone hard, especially Mika, who’s lost her “gege” (Chinese for “big brother”), the boy who was to teach her about her Chinese heritage. The one she called on late at night to get a drink of water. The person she loves more than her adoptive parents. Malea Emma Tjandrawidjaja swathes Mika in the blunt honesty and sorrow of youthful loss, breaking our hearts as she puts Mika through her grief. Through her brilliant performance, we come to realize that Yang was never a robot to her, even though she knew full well what he was. He was her family in a way that her parents never could be, a connection to her racial heritage while also being the friend and brother she needed. 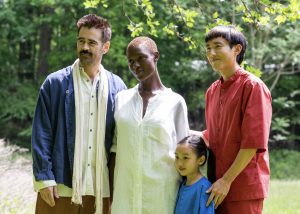 We see moments both Jake and Kyra have with Yang that also let us look at him through their own eyes. Jake and Yang discuss tea and the journey leaves make to become a drink; likewise, Kyra and Yang discuss butterflies and caterpillars, most notably the concepts of beginnings and endings. It’s almost as if Yang was preparing them for the day he would leave them, entrusting them to be what they were meant to be after he was gone. Justin H. Min is a beam of incredible light, almost ethereal in expression and movement. In his conversations and interactions, he gives Yang a gentle soul curious about the human condition, even being amazed at the possibility of what humans might call “love.” The film’s magic trick is that he has the ability to love and to accept love; it’s just that he might not know it in our own language.

After Yang is a remarkable, beautiful film that transcends what we know about death and loss. It’s couched in the removal that comes with having a non-human character at the story’s center, but this removal makes us examine the word and notion of “family.” Is it a case of shared genetics? Or is it the love we have for those we care about, regardless of heritage or relations? And why would it be so hard to say goodbye to a store-bought robot? This movie shows that it doesn’t take blood to make a family; it takes understanding and acceptance, two traits among the many that make After Yang an exceptional delight.

MPA Rating: PG for some thematic elements and language. Running time: 96 minutes. Released by A24.
Posted in Movie Reviews