Posted by Eddie Pasa on February 8, 2022 in Movie Reviews / No Comments 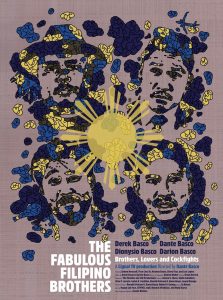 Speaking as a Filipino-American, it’s always wonderful to see us represented in the things we consume, and we’re insanely proud of it. No matter if it’s in literature, music, film, television, or seeing a restaurant bearing the Filipino flag while we drive here in America – we always stop and check it out. In recent years, we’ve seen more and more of us crossing into the mainstream and making our marks. From Broadway legend Lea Salonga to comedians Rob Schneider to Jo Koy to Annandale homeboy Ramon DeOcampo popping up in films like XXX: State of the Union and (most recently) in an episode of “Magnum P.I.” to the multitalented Vanessa Hudgens to Manny Jacinto, Mitch Narito, and Eugene Cordero having considerable roles in NBC’s landmark comedy “The Good Place” to Jacob Batalon and Mary Rivera (who gets to speak a good length of Tagalog in a Marvel movie! I was thrilled!) appearing in Spider-Man: No Way Home, things are looking good.

One of the earliest representations of Filipino-Americans I remember seeing was Dante Basco playing a huge role opposite Robin Williams as Rufio in Steven Spielberg’s Hook. I was only 15 when the film made its theatrical bow in 1991; when my parents took me to see it, I wondered immediately, “Who’s this guy who looks like my cousins in California and Manila?” Now, in the vein of My Big Fat Greek Wedding, here comes the entire Basco family with The Fabulous Filipino Brothers, written by brothers Dante and Darion, directed by Dante himself, and starring Dante, Derek, Dionysio, Darion, and sister Arianna. (Even more Basco family members are listed in the credits in different acting, extra, and production roles as well.) 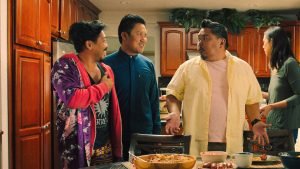 Like every film about a tight-knit family, we’re here to see the lengths to which we’ll go to make each other happy, whether it’s hustling for lechon money, picking up Lola (the Tagalog word for “grandmother”) from dialysis, setting a brokenhearted brother up with a date, or just simply being the reliable sibling of the bunch. The Basco brothers concoct a fictional tale of a wedding and the circumstances leading up to it, ranging from the sweet to the salacious, with awkward moments and little nuances and cultural staples sure to make Filipino-American audiences laugh themselves silly… or to gird their loins for the inevitable conflict that threatens to blow everything up.

Dante gives the film a laid-back, “just because we can” feel which invites us into their lives and settles us right at their kitchen table, where we meet the four boys at the center of the story. Those of you familiar with Filipino family dynamics will be right at home with the roles that senior brother Dayo (Derek Basco), second-eldest “Danny Boy” Danton (Darion Basco), prized “Golden Child” Duke (Dante Basco), and baby David (Dionysio Basco) have to fulfill. For those of you not familiar: The oldest is supposed to take care of everything, the Golden Child is the most successful, the middle child just kinda gets left alone, and the youngest gets away with everything. (Sorry, Mireya.) 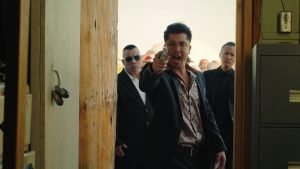 Each of the four brothers takes his turn in the spotlight (well, sort of – David’s time is short but pivotal), revealing what they’re bringing to the wedding and the story behind it. We spend more time with Dayo and Duke, as their stories provide humor and tension; Dayo’s in charge of the food (for a Filipino wedding, this is one element that must be perfect), while Duke’s called away to Manila on a speaking engagement. Dayo’s bit is a funny tale about how he gets the money for the feast, and the outrageous circumstance he’s put in is exacerbated because of his Lola (Iluminada Monroy) being stuck in the car with him. On the other hand, Duke’s just coincidentally seen his old girlfriend Anna (Solenn Heussaff) outside the hotel conference room where he’s just delivered his remarks, and they wind up reconnecting in ways that would probably upset his wife Sammy (Lauren Gallagher).

Back home, David is living his best life, slacking it up while his brothers do the heavy lifting… well, that is, except for Danny Boy, whose catastrophic breakup has left him in mourning for two years. Their two stories intertwine as a result of David setting Danny up on a date, hoping to break him out of his moribund state and get him away from his room, where he creates unintelligible electronic music that even their Lola can’t stand. (Those of you wondering if the Filipino epithets “Susmaryosep” and “Ay, nako” will be heard, here’s your chance.) Fellow Filipino-American actor Liza Lapira appears as Teresa, a woman who’s got no time for small talk or games, which seems absolutely alien to Danny, especially when it’s made obvious why she’s so direct. 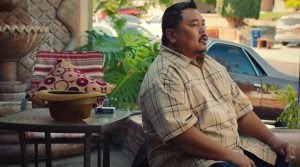 The screenplay by Dante and Darion Basco covers broad strokes of the Filipino-American experience, meant to distill lifetimes of culture and heritage into one quick hit. From the obvious food references (made extremely sexual in one hilarious scene) and the infamous side-piece conversations to more subtle references to Filipino family hierarchy and little in-jokes that only Filipinos would get (e.g., the gambling prowess of our Lolas and the fact that there’s a giant wooden spoon or fork hanging on the walls in all our homes – what is it with that?!),  this movie is balls-to-bones Filipino to the nth degree. The brothers are written to behave exactly the way they’re expected to, and the Bascos wring every last morsel of humor and emotion out of what they’ve laid out for themselves.

This isn’t a performance-driven piece or an early awards contender; it’s much more than that. It’s a celebration of growing up in a Filipino immigrant family and making the most of our opportunities. First-time director Dante Basco steeps us in what it means to be a Filipino-American, holding fast to tradition while still training an eye on the future and progressing past the norms which hold us back, evidenced in the film’s climax with one character defining the open hearts and the welcoming spirit for which Filipinos are so well-known. The film’s opening Steadicam shot, which follows Duke through an entire house of wedding revelers, sets us up for the way we’re to take this film: It’s a party where everyone’s invited and will be well-fed until you’re begging for mercy.

Not Rated by the MPA (contains strong language and a sexual situation – equivalent to R). Running time: 99 minutes. Released by 1091 Media.
Posted in Movie Reviews