Posted by Eddie Pasa on February 16, 2022 in Movie Reviews / No Comments 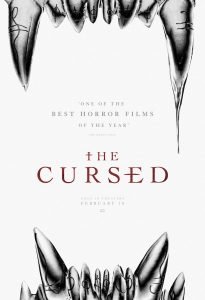 For the first two-thirds of The Cursed, we are abjectly throttled and abused, subjected to witnessing acts of horror and befoulment to the point of numbness. This film does not hesitate in getting straight to the point with shocking gore and dismemberments; one such grisly incident paves the way for the rest of the story to unfold, and it comes on so suddenly, we haven’t a chance to avert our gazes. Writer/director Sean Ellis takes every opportunity to pummel us into submission with haymaker punches of terror, as if to get us ready for a gargantuan finish sure to top the visual and aural frightfest preceding it.

The Cursed is an upsetting, unsettling film, vacillating between maddening suspense, genuine dread, and copious jump scares, especially delighting in the isolation of its time and location. We’re thrust into an 1880s remote Vermont community where landowner Seamus Laurent’s (Alistair Petrie) minions brutally exterminate a Romani squatter’s settlement, but not before two of its members cast a revenge curse that soon consumes the colonist population. The Romani claim the land is theirs, and there are records showing they’re within their rights, but that’s not going to stop a man like Seamus, especially when he’s got manpower and firepower backing him up. The appearance of pathologist John McBride (Boyd Holbrook) and the manner in which the locals are picked off one by one recalls shades of Tim Burton’s Sleepy Hollow, where a city constable is sent to investigate a rash of murders plaguing a small town. Likewise, John endeavors to get to the bottom of the attacks and disappearances that seem to have begun with the Romani slaughter, only to find that he himself is becoming a pawn in the game rather than the objective observer he wishes to be. Especially after Seamus’ son Edward (Max Mackintosh) turns up riddled with bite marks and vanishes after his sister Charlotte (Amelia Crouch) sees him being swarmed by tentacle-like appendages in his own bed.

We’re made to feel helpless and alone not just by The Cursed’s locale, but also the grayed-out, dulled, colorless world Ellis (who also serves as cinematographer) lays before us. The color scheme – or lack thereof – speaks of hopelessness and darkness, two emotions and states of being in which this film dwells. Browns of the surrounding woods and orange candlelights attempt to ward off the constant encroachment of ill-feeling, but there is no relief from the suffocating gloom which overpowers everything. Likewise, the actors fall right into the parameters set by the subject matter and the period. Performances are muted, as if to cement the notion that life is barely hanging on in this corner of the world, connected to the tangible and real by the wispiest thread threatening to break if pulled any further. Ellis asks them to fill their roles with such subtlety and nuance, it’s hard not to be completely drawn into their skins and to live the agony everyone – including the unfortunate Romani faction – endures. The Romani and the rest of Seamus’ family, especially mother Isabelle (Kelly Reilly), embody the film’s themes of protecting what truly matters – family, pride, and love – instead of Seamus himself, who only concerns himself with power and the appearance of strength.

It’s in the final third of The Cursed where the covert turns to overt and we’re disappointingly let off the hook. There’s an alleviation in tone that skews too far to the easy, quite a contrast to what we’re put through for the majority of the film. While Ellis strongly packs the first two acts of the film with enormous action and terror, the final act undoes it by leaning firmly into the derivative, to the point where you can see the various influences upon which Ellis draws to make his closing argument. You find yourself wishing the film could have maintained its tension levels by staying raw and in the moment. But that’s not what we get. Instead, the story is wrapped up a little too pat, a little too hunky-dory, as if the unrelenting horror that Ellis plies us with has become too much for him to handle. On the whole, The Cursed is absolutely rapturous horror movie viewing with the caveat of a rushed and forced ending that doesn’t match the layered, impactful prose of what came before.