Posted by Eddie Pasa on February 6, 2022 in Movie Reviews / No Comments 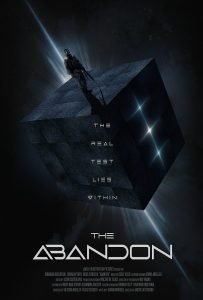 Low-budget films usually have one North Star guiding them through production, post-production, distribution, and exhibition: Make your limited resources count and make it look good. The Abandon is no different, spending 95% of its running time sealed in a room with no doors or windows while one man tries to figure a way out. Director Jason Satterlund helms this tight affair with workmanlike precision, finding ease with his minimal setup and letting the cameras and actors do the rest. And it works.

U.S. soldier Miles Willis (Jonathan Rosenthal) is suddenly whisked from being wounded in Middle Eastern combat into a gray-tiled cell with nothing but what was on his person at the time of his abduction: his weapons and clothing, a first-aid kit, and a satellite phone which doesn’t seem to work. Until, of course, it rings and stranger Damsey Robins’ (Tamara Perry) frantic voice comes over, saying she’s in the same circumstance.

Automatically, we’re put into shields-up mode, because how can Damsey – or someone or something who says it’s Damsey – be contacting him with such clarity? Is it the enemy Miles is supposed to be fighting? Or is it something else entirely beyond human comprehension? And how can they trust one another to help each other find an exit from this exit-less room? And can they do it before Miles’ room starts shaking and shifting gravity, a repeated harbinger that might spell his disastrous end?

It’s the Kobayashi Maru test in a bottle, to face certain death while trying to escape the inescapable. Rosenthal’s physical performance and Perry’s voice performance hang us on every attempt to unravel their mystery, alternating between calculating the gravity shifts and letting each other into their lives, the discoveries of which range from the innocuous to life-altering improbabilities that stagger both of them.

Throughout, Rosenthal anchors The Abandon with pitch-perfect nuance, playing his bewilderment, fright, and resourcefulness against trying to stay analytical and investigative. It’s a hell of a one-person show he puts on, but Perry steps in and makes it a true partnership, giving Damsey a fully fleshed-out presence without seeing her in corporeal form. Perry pulls off a terrific magic act by making Damsey an unseen equal, which is compounded by a stunning revelation that defines who, where, and when she is.

Ray Huang’s wide frames capture and distort this space all at once, making Miles’ cell look cavernous and cramped, providing another layer of unsettling unease to this already thickly perilous suspensefest. Take note of the illumination in the room; there are no light fixtures or another readily visible source, yet the room is lit, with distended lens flares sprawling across our field of view. The room looks warped at the edges thanks to the anamorphic photographic process employed here, further throwing us off visually and deepening our discomfort. But that’s what Jason Satterlund wants and ultimately gets from his team, to bend our perceptions and perspectives for maximum tension.

In ways, The Abandon is getting to the core of humanity, putting a soldier together with a civilian and making them both work toward helping each other. While Miles’ problem-solving is a little more clinical in that he tries to make sense of an abjectly nonsensical situation, Damsey is there as a tether, guiding him back toward what he knows, not what he cannot see. Someone or something wants to see humans pushed to their limits to see who they really are as people, but what will they see? An exercise in compartmentalizing or working through the situation with concern and care? We’ve seen similar films, but none as personal, emotional, and definitely not as low-key as The Abandon. This film puts humanity back in the locked room genre made so popular by the likes of the Cube, Saw, and Escape Room series, and brings us into a place where cooperation – not antagonism – is the only solution.