Posted by Eddie Pasa on February 4, 2022 in Movie Reviews / No Comments

The whole of Sundown is spent observing the odd actions of an Englishman named Neil (Tim Roth) as he saunters through downtown Acapulco, looking and acting like a beach bum while staying in a low-rent hotel across the street from the beach. This would be fine, were it not for the opening scenes which show him on vacation with his powerful businesswoman sister Alice (Charlotte Gainsbourg) at an upscale resort with her two kids, and they’ve just been notified of their mother’s sudden passing. Now that they have to go back, Neil can’t find his passport and sends the other three ahead on the flight back to London… and instead of going back to the resort to find his lost passport, he walks to a janky hotel and calmly fishes it out of his bag. 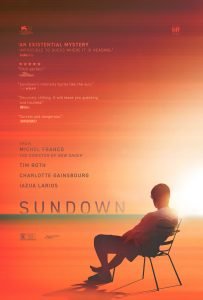 And hey, who hasn’t wanted to do just that? Leave the world you know behind to hang out in a new spot, meet new friends, and drink beer from sunup to sunset. Maybe even get to toe-curlin’ with a young lady who owns the store right around the corner. But why here, and why now? Was this the plan all along, or was it merely seizing an opportunity? The manner in which Sundown operates is akin to an unfolding whodunit wrapped in the clothes of a family drama, sitting in a gray area where the audience has zero clue about what’s going on and what’s driving Neil’s decisions.

Roth firmly anchors this film with a quiet, solipsistic performance which also shows him relaxed, taking in the day’s adventures and letting life swirl and flow around him. In contrast to vitriolic performances past, Roth makes Neil a curious figure, solid and confident in floating where the winds take him when he gets out of bed in the morning. It’s a combination of someone who’s secure in his wants yet doesn’t know where he’s going, but he knows something will at least provide a distraction from whatever’s bothering him. He walks daily from his room to the beach bar to the store where shopkeeper Berenice (Iazua Larios) takes a shine to him, eventually becoming his romantic partner during his time on the lam.

“Languid” is the only correct word to describe the approach writer/director Michel Franco takes in his measured, solemn examination of a man alone in a strange town. Even when tensions start to build and action jars us out of placidity, there’s a steady, guiding hand that never tips the film toward getting out of control. Strange and tragic things happen to and around Neil, but Franco stays well out of the artificial without needlessly adding melodramatic adornments. He doesn’t have to push a scene into trumped-up hysterics, as Neil’s surroundings – especially a criminal undercurrent which rears its ugly head from time to time – are more than capable of doing so on their own.

There’s no musical score to heighten or amplify a scene or its emotions; the only sounds we hear are the diegetic noises – music, speech, city hubbub, et cetera – that Neil hears wherever he goes. With this technique compounded by cinematographer Yves Cape’s gorgeous frames and long takes, we’re rooted firmly in Neil and his personal journey to his unknown mental destination. The places where he ventures – both figuratively and literally – paint a picture of a man avoiding something, but not necessarily running from it.

Maybe it’s a peace he’s found in a busy city and its people. Or maybe he’s turning his back on something in London. It could even be that he just wants something different from his old life, someplace that has no memory of him that he looks forward to discovering anew. Or maybe Sundown isn’t just a title. The mystery of Neil is solved piece by piece, leading to an understanding that throws the whole film into sharp relief. Michel Franco involves us right from the start, piquing our interest by not giving us everything all at once. Limiting Neil’s dialogue and reactions only makes us want to know more about what’s going on with him, a hook that sinks deep into our psyches and pulls us toward Sundown’s beautiful and shattering revelation.