Posted by Eddie Pasa on February 25, 2022 in Movie Reviews / No Comments 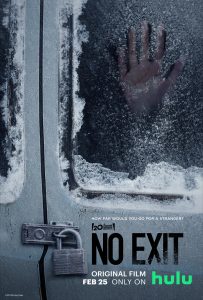 Real talk: You can’t write about a movie titled No Exit that features a group of strangers forced to be in one room and immersing themselves into the circumstances that brought them there without at least acknowledging the obvious similarities to Jean-Paul Sartre’s 1944 play. Sure, it’s the easy route, especially seeing how this movie’s based on a 2017 novel with the same name. And, of course, you know the phrase “Hell is other people” is gonna find new audiences in many reviews this weekend.

In this film’s case, the phrase is entirely accurate. Hell is, indeed, everyone sheltering at this film’s blizzard-struck mountain pass rest stop: a rehab escapee, a former Marine and his wife, and two men who seem to be keeping to themselves. Oh, and a kidnapped little girl stuck in a van in the snowed-over parking lot. Everyone’s got their secrets, and it’s only a matter of time before the consequences of the actions which brought them all there are reaped. 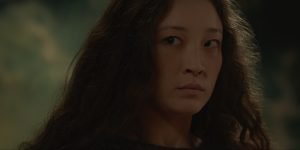 There’s not much else to this movie – it’s there and gone before you know it. Mostly because motives are divulged early, pushing No Exit from a “whodunit” to a survival action film, but also because we cannot be moved to care for anyone, neither through the writing or the performances. It doesn’t challenge, nor does it seek to oversensationalize; on the contrary, it doesn’t go far enough.

The script by Andrew Barrer and Gabriel Ferrari (based on Taylor Adams’ novel) doesn’t give us any time to fully seat ourselves with the characters before chaos descends upon this quintet, nor does the script want to. We’re meant to hit the ground running with a minimal amount of traction as Darby (Havana Rose Liu) is established as our plot gateway, both figuratively and literally; the opening scenes show her bolting out of a safe space and into the unknown, and it’s through her witness that we experience the film. 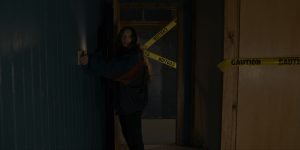 By the film’s urgent nature, we’re not allowed to really get to know her fellow rest stop occupants except through clumsily-directed, in-one-ear-and-out-the-other dialogue exchanges and body language that doesn’t so much as paint a picture as it does push the characters onto us. We’re forced to know rather than invited to know about Ed (Dennis Haysbert), a former Marine with a slight gambling problem. Conversely, we’re told so little about his wife Sandi (Dale Dickey) and the shady men occupying distant corners of the room, Ash (Danny Ramirez) and Lars (David Rysdahl).

Conversation is limited, thus denying us any secure foothold; it’s not that we’d expect to know everyone’s entire life stories, as the film doesn’t waste time kicking into higher gears. But no stakes are set until we venture further into the action, where some histories are filled in over the spread of the movie. And by the time we get the full picture, we’re still left with people that we don’t care about one way or the other. 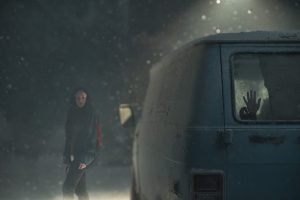 Instead of the characters, the film wants us to invest in the suspense inherent in the remote location, the hazardous conditions, and the danger presenting itself with Darby’s discovery of a bound and gagged Jay (Mila Harris). Here’s where the film turns into a bit of John Carpenter’s The Thing (or the novella it was based upon), as Darby has to figure out who’s friend or foe.

The thin script goes more for frights and twists than it does actually telling a good story. Yes, I get that finding Jay early and thus moving the plot faster is a necessity. And I understand that we’re supposed to be rooting for Darby to conquer her addiction and save the day. But there’s a detachment, a standoffishness inherent in the script and the performances, that prevents being at home with the characters enough to care about them.