Posted by Eddie Pasa on February 10, 2022 in Movie Reviews / No Comments 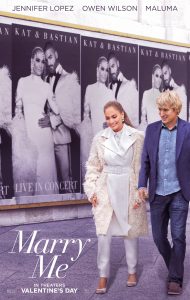 There’s a familiarity in the notes which Marry Me hits. It’s a movie that seems like it’s been done before, especially with its “superstar meets and falls in love with a regular person” modus operandi. But there’s a vein of genuineness that runs through this movie like a river giving life to the barren land around it, rooting us in the characters and making us root for them as they wend their way to their desired ends.

Yeah, you’re probably thinking Marry Me is just another Notting Hill… and you would be wrong. In Notting Hill’s case, there was a central omission creating the tension which powers the second half of that film. Here, all the cards are on the table right away, and the tension is created out of the difference between two very different worlds which collide resoundingly, each having to make room for the other. However, this film’s joie de vivre lies in the journey, not the destination. 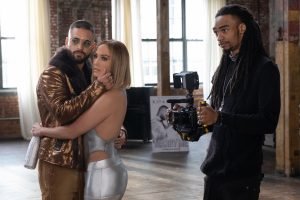 It all has to do with the superstar being given a reason to carve things out for herself. In Notting Hill, nothing really ever changed for Julia Roberts’ character; she was simply an actress who happened to fall in love with a book shop owner, and her life went on as per usual. With Marry Me, pop sensation Kat Valdez (Jennifer Lopez) has just orchestrated a huge publicity stunt – a wedding scheduled to take place at her high-profile concert after singing a marriage-oriented song with her boyfriend Bastian (Maluma), who wrote and sings the song with her – only to find that Bastian did some creeping with her personal assistant.

We all know how decisions made during moments of heartbreak and upheaval turn out, right? Nothing but major regret (at least as far as I know). Instead of having Bastian on stage with her saying “I do,” she spots a sympathetic face in the crowd – someone who looks like he’s been there before – and marries him instead. Suddenly, math teacher Charlie Gilbert (Owen Wilson) – who’s at Kat’s concert by sheer coincidence – is taken from life as a divorced nobody to being Kat’s new husband and the target of a social media and paparazzi frenzy. 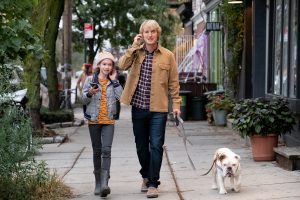 We all know how this is going to play out, right? A random guy can’t handle the pressures and demands of being in the public eye, but he sticks around long enough to provide a different perspective for the superstar that makes her look at life anew? Yup, there’s not much in the way of originality as far as that goes. But where Marry Me diverges from roads previously taken is that people are genuinely acting in the best interests of each other, not going behind anyone’s back or betraying someone for maximum gain. The script by John Rogers, Rami Sagher, and Harper Dill eschews the typical Hollywood backbiting and goes for a healthy mix of sweet and realism in a world where the latest social media gossip can make or break a career.

You have no idea how refreshing it is to see people being honest (mostly) and working for each other in a film like this, from Kat’s manager Collin (John Bradley) to Charlie’s daughter Lou (Chloe Coleman) and his friend Parker (Sarah Silverman). There’s no one looking to capitalize on the situation; yes, Kat’s team devises a plan to show her sticking with her decision and seeing it through, albeit only for a few months. However, as must happen when time wears on in films like this, both Kat and Charlie cut through the façades and get to what’s real, making a real go at it amid the naysayers and external pressure from Bastian and others. 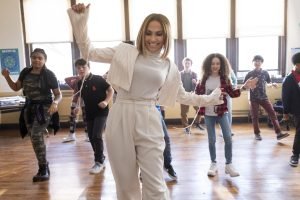 Not gonna lie – half the fun is guessing what clichés are going to play out in a film like this. But Marry Me forges its own path, even though its machinations seem trite. Sure, we’ve seen this kind of fantasy tale before, but how many have it in them to use these tropes to its advantage? All the rom-com staples are trotted out and made to strut, including “the divorcé with a cute kid,” the “rom-com run” seen in every film like this, the “love scene followed by catastrophe” sequence, and the “Oh, my God, I’ve made a huge mistake” realization that kicks the movie into its highest gear.

Owing to the downhome personalities given to its two leads – “Jenny from the Block” and good-ol’-boy Owen Wilson – these tropes and staples are not just expected, but welcomed, as both believe in the ideals of love but are too scared to do anything about it when it fairly gift-wraps itself. However, the film’s pull lies in the fact that both of them are damaged and willing to try to make something – anything – work. There’s an undercurrent of altruism that makes Marry Me heroic in its want to be the feel-good movie of the year, and we can’t help but smile and go along with it. 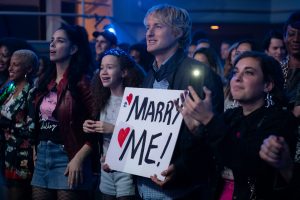 Another boost this film gets is from our two leads having the ability and believability to pull it off. Some may say that Jennifer Lopez is just playing a more grounded version of herself, and others will maintain that Owen Wilson is just doing what he does best – fashioning his character into an ordinary everyman flung into an extraordinary situation. But there’s something about their chemistry that makes you hope the movie winds up the way you want it to, even if you’re already pretty sure how it’s going to end.

It’s only appropriate, especially since “seeing things through” is one of this film’s themes. There’s a calming influence the script grants this movie, even when Charlie’s caught in the whirlwind of Kat’s public life, especially when having to accept the presence of cameraman Kofi (Khalil Middleton) documenting every moment together. But when Kat sends Kofi away and personal assistant Melissa (Michelle Buteau) stops videoing everything for the ‘gram, that’s where Kat and Charlie’s sham marriage starts gaining steam, propelling us toward what we hope is a happy ending for all. 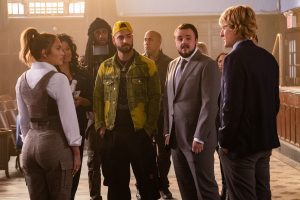 Marry Me isn’t just a collection of “been there, done that”; it’s a movie that goes to great lengths to show people being cared for and valued. It may be wrapped in the clothes of a modern-day romantic comedy about two disparate souls from different worlds, but there’s something that defies the pitfall of being just a soulless machine. Honestly, it’s so refreshing seeing a film free of histrionics and trumped-up drama, and it’s something worth revisiting if only to see two people trying to make the most of the impossible and the sweetness that arises from their efforts.

MPA Rating: PG-13 for some language and suggestive material. (Seriously, aside from one sensual concert performance early in the film, this movie’s tame enough to be PG. I have no idea what the MPA are playing at.) Initial portion of closing credits contains extra footage. Running time: 112 minutes. Released by Universal Pictures.
Posted in Movie Reviews