Posted by Eddie Pasa on February 3, 2022 in Movie Reviews / No Comments

Okay. Y’all remember the NBC television series The Good Place by Michael Schur, which featured a group of misfits rallying around one of their own as their leader, shepherded by an older man who knew more about what was going on than they did? And through multiple lifetimes of hard knocks and lessons, they become their best selves beyond anything they’d ever dreamed? Well… you could say that Jackass Forever is like that.

Instead of enlightenment, Johnny Knoxville and his merry band of miscreants push the envelope harder and further than they’ve ever pushed it before, delighting in gross-out humor and pranks bordering on the criminal and recklessly dangerous. But it’s all in good fun, meant to get a rise (sometimes literally) out of each other and to finish what they started with a bang.
And a whole lot of bodily injury.
And vomit.
And penises.
My God, the penises. 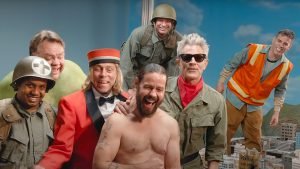 Once derided as the fall of western civilization and humanity as we know it, the initial incarnation of “Jackass” as a television show was actually screamingly hilarious. That is, once you realized it was just Knoxville and company trying to make live-action skits out of bits from cartoons featuring the likes of Tom and Jerry, the Road Runner and Wile E. Coyote, Bugs Bunny, and other Saturday morning staples. That’s all “Jackass” ever was, and it went about itself unashamedly and without abandon.

This improbable fourth movie sees the core cast – which includes Knoxville, Steve-O, Jason “Wee Man” Acuña, Chris Pontius, Dave England, “Danger” Ehren McGhehey, and Preston Lacy – pushing 50 and looking down the barrel at advancing age. Knowing what they’ve done in the past and how they got to be where they are, do you think for one second they’re going to take getting older lightly? Well, yeah; they’re throwing all the rules out the window and going for broke with Jackass Forever. 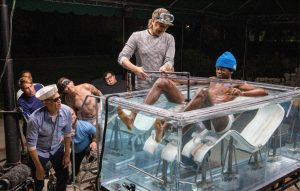 And when I say “going for broke,” the emphasis gets placed heavily on “broke.” They aren’t spring chickens anymore, and we’re privy to how much they’ve put themselves through physically, which doesn’t stop with this movie. (Bonus points for getting the “chinko machine” from the Japanese comedy show “Gaki No Tsukai Ya Arahende!!” into the mix.) Some of the stunts and pranks seen here wind up with serious, call-for-a-medic, hospital visit-worthy damage done to their bodies, not to mention fraying the tether keeping their minds from going completely around the bend. Well, more around the bend than they already are, but still.

Starting with Jackass 3D and into this movie, their use of professional-grade cameras give their shenanigans a little more of a cinematic quality, but the ethos and ethic defined by its MTV-show origins is still there: Perform some outrageous, outlandish stunt and make sure the tape’s rolling when you do it. It doesn’t matter where the camera position is; just make sure to get the shot, ‘cause whatever happens might only happen once. Just be ready. 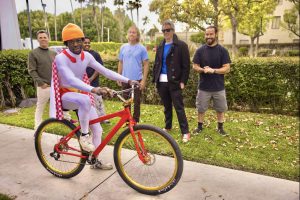 When the cameras are recording, anything goes. Hold on tight, ‘cause even so much as watching this film will make your teeth hurt. From the epic, traditionally-shot, studio backlot-based opening credits prologue featuring Pontius’ version of a Kaiju monster to watching Danger Ehren getting punched “in the dingding,” Jackass Forever works overtime for laughs from the crew onscreen or the audience in the theater. And holy crap… do they earn every last one.

As the core cast is pushing 50, they’ve brought in a younger generation to help them along, some of whom admit being ultra-stoked to be in a film with the people they grew up watching. These newcomers take the larger brunt of the more physical stunts and self-punishments while still leaving room for the vanguard members to participate in their own magical brand of stupidity. One of the highlights of Jackass Forever is the sheer enthusiasm of this additional cast, happily being party to whatever task lies in store for them. It’s infectious and undeniable, especially coming as it does after certain stunts and physical challenges proving that they’re as tough as their forebears. 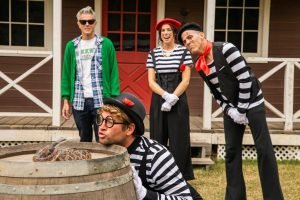 One of the draws of Jackass – especially the films – is not the stunts themselves, but watching reactions, whether from the person performing the stunt or the crew standing around watching what’s going on. The stunts in and of themselves are just means to an end, and Jackass Forever makes sure to mine every bit of mirth and laughter out of even the most harrowing of circumstances.

For instance, there’s no reason we should be laughing at a prank involving a venomous snake and a darkened room; on the face of it, this prank is mean-spirited in its aim to mentally torture its victims. But there’s a sick pleasure in watching the hapless participants bang around aimlessly, knowing the lethal danger has been taken out of the equation only to be replaced by annoyances that make the scene a little lighter.

Would this happen to anyone else, we’d be screaming for arrests and prosecution. However, as it’s the Jackass crew, we can only watch as the prank unfolds, made all the more surreal by Pontius doing his best impersonation of Buffalo Bill from The Silence of the Lambs. It’s the “all-or-nothing NOW” spirit with which the cast members throw themselves into every sequence that is the instant attractor, daring us to go along and keep our eyes open as tongues get tased, groins are shattered and made to bleed, false teeth fall out, concussions and electric shocks are inflicted, and testicles are speedbagged… among other feats of insanity. 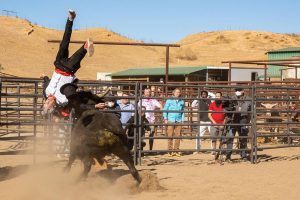 As deceased fan-favorite cast member Ryan Dunn once said, “Why would anybody ride this shit? What’s the reasoning?” “Jackass” tapped into the part of our consciousness mollified easily by the puerile, appealing to the collective recess in our brains that still appreciates grade-school dick and fart jokes. Jackass Forever is one of the best of the film series, a raucous celebration of lifelong friendships forged by pain and laughter. It’s also the Jackass crew getting older and doing it the only way they know how: throwing up a middle finger to maturity while giving it a swift kick in the dingdong.