Posted by Eddie Pasa on February 11, 2022 in Movie Reviews / No Comments 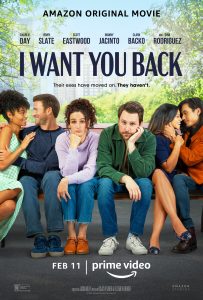 I Want You Back is another collection of romantic comedy cliches given enough spark by its leads to make viewers at least stay until the end, even though the film follows the rom-com playbook to the letter. There really isn’t much innovation in this cinematic pantheon, is there? The “Someone loses their significant other and wants to win them back by any means necessary” trope is a workhorse in this field, which is where I Want You Back sits in its comfortable spot.

Only this time, there are two spurned someones – Peter (Charlie Day) and Emma (Jenny Slate) – which necessitates a coincidental meet-cute resulting in the ultimate scheme: Peter’s going to ruin Emma’s ex’s new relationship, and with Emma ruining Peter’s ex’s new relationship, everyone’ll be happy with their old flames in their arms again. Of course, this friendship is just waiting to become something else, but they’re too intent on the plan to really notice, and you know the rest. 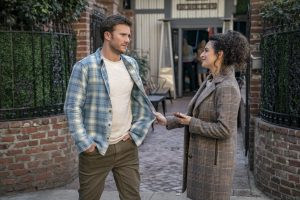 Seriously, there’s absolutely nothing new under the sun here. At all. It’s even got the “Someone has to hide in a room while a couple has sex” staple, along with many other tried-and-true moments lifted straight out of other films. It’s times like these you want to reach through the screen and slap the characters around for acting like absolute idiots. And why not? We’re here to see these two behave in the ways that gave their respective partners reasons for breaking up with them.

But that’s the thing: Their character flaws aren’t really a part of this movie. Each of their significant others lists why they’re ending their relationships – Peter’s girlfriend Anne (Gina Rodriguez) wants a bigger life that she’s found with fellow teacher Logan (Manny Jacinto), and Noah (Scott Eastwood) hoped Emma would break out of her post-college coasting and be the one he wanted to start a family with, but he’s found that possibility with pie shop owner Ginny (Clark Backo). So when Peter and Emma meet each other while they’re crying separately in their building’s stairwell – their workplaces are only 3 floors apart, thus enabling lunch sitreps and happy hours – we see them in full GO mode. Aside from Emma’s living situation, we see no evidence that they’re not capable of changing their lives. 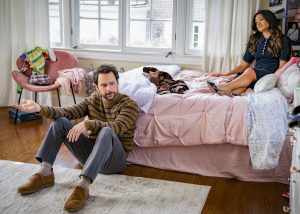 Although the movie’s brought a little low by its color-by-numbers nature, Charlie Day and Jenny Slate are dynamite as the-couple-that-doesn’t-know-they’re-a-couple. They guide this movie down preordained paths with gusto and vibrancy, elevating familiar plot points and dialogue with their respective brands of mania and snark. As they’re the only ones acting on their selfish wants, they’re naturally going to be the ones being the most magnetic.

Straight-up, that’s the long and short of I Want You Back. It’s not a bad movie by any stretch of the imagination, as the cast ably lifts this movie away from its trite moorings. And bonus points definitely go to Letterkenny’s Clark Backo, who gets to throw in one of that show’s three-word catchphrases. Laughs abound in this film, and that might be enough to set it apart from the usual. But it’s still very much The Usual, and it’s disheartening when you think more about similar plots, stories, and action you’ve seen elsewhere than the ones in the film you’re watching.