Posted by Eddie Pasa on January 6, 2022 in Movie Reviews / No Comments 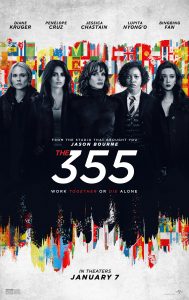 Honestly, there’s nothing in The 355 you haven’t seen anywhere else, and probably done better. Picture the two loggerhead characters from Guy Ritchie’s superlative The Man from U.N.C.L.E. and the exact plots from Phil Alden Robinson’s Sneakers and Susannah Fogel’s The Spy Who Dumped Me all thrown into the spin cycle, and you’ve got The 355. Well, The Spy Who Dumped Me may not have done it better, but The 355 stands as its exact opposite, in that while the former was trying to be an action-comedy but kinda missed the mark, the latter takes itself too seriously for it to be as lighthearted as director/co-writer Simon Kinberg wants it to be.

The fault lies not in the driven women at the heart of the film; they’re written and performed as people who need to get the job done, come hell or high water, and they’ll do it. One terrific thing about the characters portrayed by Jessica Chastain, Lupita Nyong’o, Diane Kruger, and Penélope Cruz is their ownership of successes and the responsibility to correct their failures. We’re never in doubt of their capabilities or their strengths, and this solid definition is what makes the movie go. Their performances are what keep the movie watchable, and the action can be downright spectacular at times. 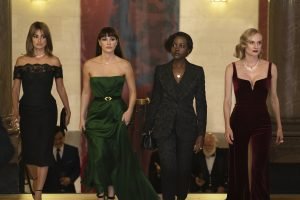 However, their characters deserved a better script than the one Kinberg and Theresa Rebeck have used to support this film. Every retread cliché – two competent and capable agents butting heads and having to find a way to work with one another, the partner who doesn’t want to get dragged back to active duty but goes anyway, the fish-out-of-water who suddenly kicks it into gear to run with the pack, among others I won’t spoil – gets waved in our faces. It’s as if Kinberg and Rebeck think we won’t notice because it’s an all-female crew we’re running with – yeah, nah, we notice.

The almighty MacGuffin is a fairly threatening one, though – it’s a “drive” that allows its user to hack into any computer system (even closed, black-box ones) for whatever horrid purpose, whether it’s blowing up or crashing planes and power grids or pretty much anything. Seriously, something like seven planes get destroyed and the film wants us to brush this off, obviously because ownership of this device will prove catastrophic in the wrong hands and torch off Armageddon at the touch of the “Enter” key. Yet the film treats these calamities as inconsequential while all we can do is watch as these four women race against the clock to stop it from doing any further damage. 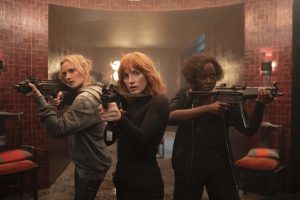 We’re not given any time to seat ourselves fully in our heroes’ shoes, because, as Vincent Hanna says in Heat, “Drop of a hat, these guys will rock and roll.” Kinberg and Rebeck run us through the barest of character development – Mason Browne (Chastain) as the go-get-’em CIA agent, Khadijah (Nyong’o) as the whip-smart MI6 computer op, Marie Schmidt (Kruger) as a BND agent always trying to prove herself, and Graciela (Cruz) as a DNI psychologist with two kids – before belting off on a million-mile-per-hour chase for this thing. Sure, we get enough of it, but is it enough to really care when guns are pointed and people start dying? Nope – much like the folks caught in the various plane crashes and other incidents spoken of (but not shown), we’re not put in a position where they matter to us.

Instead, Kinberg wants you to focus on the adventure, intrigue, wit, and cleverness of what’s happening to (and because of) our lead foursome. And that’s the film’s primary sin: putting these women in well-worn plots and action without making anything uniquely their own. No doubt, all of the actors do what they can with what they’re given, but they should have been given something a little more than “Run. Fight. Run. Fight. Fight.” There are no character moments extending a hand to the audience to help them come along; it’s a very take-it-or-leave-it film, and its honesty in being such is to be commended. But when a film sticks set piece after set piece together without supplying the power to lift or crush the audience or otherwise move them, you have to wonder why. The 355 suffers from trying to be too many things to a broad audience, and it never finds sure footing, although we can see the hard work it takes to do so.