Posted by Eddie Pasa on January 13, 2022 in Movie Reviews / No Comments 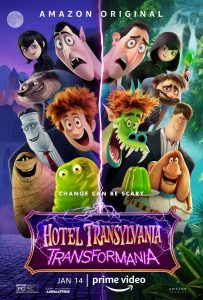 Either I’m getting old and sentimental, or the Hotel Transylvania movies are getting better as the series goes on. Whether or not it has to do with the absences of series director Genndy Tartakovsky (who steps into co-writing and executive producing roles) and star Adam Sandler (replaced by Brian Hull in this movie), the series may actually have found some good footing with Hotel Transylvania 3: Summer Vacation, and it continues with Hotel Transylvania: Transformania. (Why they couldn’t be coy and title it Trans4mania is beyond me. Then again, that’s just my opinion, and I’ll be happy with the implied “TransFORmania.”)

Although the film still deals with themes of prejudice and family, it actually manages to have some fun with its characters and not be totally cringey, and that’s where it earns its points. It’s an adventure story that literally takes Drac (Hull) and son-in-law Johnny (Andy Samberg) out of their comfort zones and makes them work together to resolve their problems. This time around, the story stems from a lie Drac tells that yields disaster and hilarity, thus prompting a journey to South America to find a magic crystal that will restore Johnny to his normal human self. 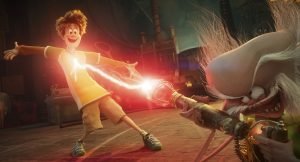 Oh, yeah – the lie Drac tells has to do with his retirement and potentially passing the hotel onto his daughter Mavis (Selena Gomez) and Johnny, which freaks him out and makes him come up with some cockamamie real estate regulation which states that the hotel can’t be passed onto humans. And as Johnny’s so consumed with pleasing Drac, he enlists Professor Van Helsing’s (Jim Gaffigan) help in turning him into a monster, which drives a lot of the film’s comedy. You can almost see the utter glee, mischief, and deadpan snark which Samberg wields like a sword throughout his voice performance, and the animation is sure to match his every note.

So when the crystal in Van Helsing’s transformation device breaks after transforming both Johnny and Drac – who becomes human – they embark on a dangerous jungle exploration to fetch a replacement crystal before the changes are made permanent. As must happen, there are lessons learned along the way which will inform the ending of the movie. We’ve all seen this kind of thing before, and there aren’t any new strides in filmmaking or storytelling attempted here, but there’s earnest fun and camaraderie in the offing between Johnny figuring out his monster capabilities and Drac having to suffer the pains of humanity – especially mosquito bites. 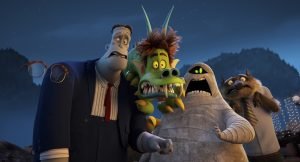 The B-story centers around werewolf Wayne (Steve Buscemi), Griffin (David Spade), Murray (Keegan-Michael Key), and Frank (Brad Abrell, replacing Kevin James from the previous films), all of whom were hit by the transformation device and reverted to their human selves. Wayne turns out to be an everyday shlub; Griffin suddenly has to deal with clothes (and others realizing he’s been walking around naked this entire time); Frank becomes a preening, self-obsessed, selfie-taking bohunk; and Murray, owing to the fact that he’s a centuries-old mummy, has to deal with bouts of narcolepsy at any given moment. The humor generated by this foursome – along with them trying to keep their friend Blobby, who’s also turned back into a plate of normal green Jell-O – rivals that of Drac and Johnny’s story, combining parent-driven humor with body jokes and the lighthearted side of narcissism.

Given the short shrift are Mavis and Ericka, the sensible, straight-woman characters who actually manage to get the job done. Even though they play vital roles in the film’s resolution, they’re basically set up as the shrews who can’t have any fun. It’s quite a contrast to Mavis’ portrayals in the first three films, and although she retains the big heart which has been the foundation for Drac’s evolution, she’s not here for much other than facilitation and to be a bit of the damsel in distress, something she’s never been before. It’s a step backward for her, even though they try to make up for it in the film’s climax. And being that we’ve only had a short time to get to know Ericka, she operates in much the same cold, kind of detached manner as seen in Hotel Transylvania 3, merely there to carry out a mission and to make things go. 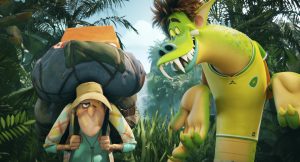 These films are as by-the-numbers as can be, and there aren’t any new revelations you’re going to get with all of them. But the undeniable mirth with which each actor voices their parts and the moral lessons each film carries are why we’re here. These films aren’t meant to break new ground or to set the world on fire with advances in animation technology; they’re here to pass on the values of honesty and acceptance to a younger generation. Speaking as a parent, there are probably better films to go to for this purpose, animated or not. But I honestly wouldn’t mind watching either Hotel Transylvania 3 or Hotel Transylvania: Transformania again. The spirit which drives them is admirable, and you can’t help but enjoy the “strangers in a strange land” conceit at the heart of this movie. It’s not a bad way to pass a rainy Saturday afternoon, and you might just enjoy yourself.