Posted by Eddie Pasa on January 26, 2022 in Movie Reviews / No Comments 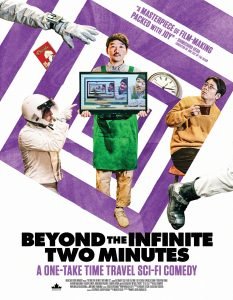 The ultimate in low-budget filmmaking and the ultimate in storytelling, Beyond the Infinite Two Minutes (Japanese title: Droste no hate de bokura) absolutely shellacks most major productions with a simple, low-key conceit and absolutely wows with its execution. The movie adheres to its own rules – until an appropriate time – and boasts a lively spirit that keeps the viewer engaged and on the hook while it takes every avenue to play out in such unexpected ways. Director Junta Yamaguchi and writer Makoto Ueda make the most out of a limited cast, budget, and visual effects and create a random happenstance so engaging and delightful, you can’t help but fall in love with it.

It couldn’t be simpler – restaurant owner Kato (Kazunari Tosa) suddenly finds himself trapped in a two-minute time loop where he has to contend with both past and future in the titular two-minute span. Essentially, some kind of time-rip opens between his restaurant and the apartment he lives in a few floors up that allows him to see two minutes into the future. His home iMac shows everything happening two minutes in the future, while the flatscreen TV in his restaurant shows everything that happened two minutes in the past. Caught between reacting to what his future self is telling him upstairs and having to explain it all over again to himself after running downstairs, Kato has to make sure everything he’s seen in the future comes to pass, lest paradoxes occur and everything goes completely awry. 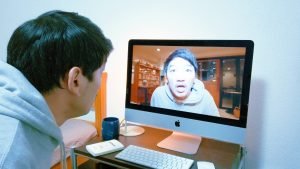 Did I mention that this is all done in one take? Yup, Yamaguchi – who does triple duty as director, cinematographer, and editor– captures this story in what looks to be a single take (aside from a quick prologue) and mines superb tension and laughs from making Kato serve as both narrator and the executor of his own self-fulfilling prophecy, all while having to deal with his friends, his subordinate, and a love interest who suddenly becomes part of the harrowing and howlingly funny narrative.

The question of “is our future predetermined, or are we free to make our own choices?” is the throughline with which Kato has to struggle. He’s stuck having to alternately obey commands given by himself which he winds up giving two minutes later. It speaks to the notion of predestination and being stuck with what’s handed to us, and the desire to break free from it. The film makes you root for Kato to kick loose of the cycle, no matter how entertaining it might be, especially as far as his friends are involved. 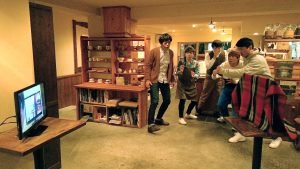 This is a purely “let’s make this because we can” film, a rare gem that amuses, stuns, and entertains with its unfettered ingenuity. It’s a piece of art that makes you say, “Why didn’t I think of this before?” and makes you feel a little foolish for not having done so. The film keeps moving, as it must; the two-minute constraint absolutely demands action, and it doesn’t fail to completely enthrall, involve, and lock the viewer into the way it operates. Beyond the Infinite Two Minutes is exemplary low-budget filmmaking, wrought of simplicity and immediacy. Most big-budget movies with a longer running time don’t manage the feats and utter captivation this film does in its 70 minutes. It’s here to do its job and nothing more; in its spareness, we find a wealth of impressive smarts and inventiveness that keeps you smiling for days.