Posted by Eddie Pasa on December 9, 2021 in Movie Reviews / No Comments

Author’s note: This review is dedicated to Stephen Sondheim, whose career defined Broadway musicals and shaped the artistic trajectories of many people, myself included. My favorite high school play I was ever involved with was the 1994 Georgetown Visitation production of Into the Woods, a musical that changed my life forever. I am in his debt and will continue to be for a long, long time. 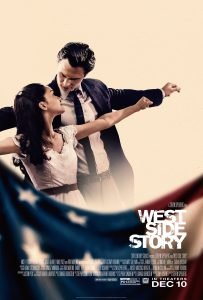 Let me say this right off the bat: Had I seen Steven Spielberg’s West Side Story before the Washington Area Film Critics Association awards voting, I would have nominated and voted for this movie as Best Picture, Spielberg as Best Director, and a whole slew of other acting and technical nods. As it stands, it was nominated for several WAFCA awards, but won none. That doesn’t matter, though; awards or no, it deserves its reputation as one of the most rapturous, joyous, and important films of the 2020s.

You’re going to see Spielberg at his finest here, delivering one of his best knockouts in his half-century-plus career. Even though West Side Story is an established property with an eternal life as one of the best Broadway musicals and one of the best films in existence, this incarnation takes it to new dramatic, intellectual, cinematic, and wondrous heights. Even in today’s troubled climate, its statements about “the other” and love transcending boundaries still hold sway, and to see them updated in such a thrilling fashion is a gift. 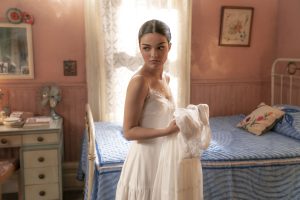 Spielberg and his frequent creative team – cinematographer Janusz Kamiński and editors Michael Kahn and Sarah Broshar (the latter of whom joined Spielberg starting with The Post) – make this musical retelling of William Shakespeare’s Romeo and Juliet larger than life through dizzying long takes and impeccable visuals enveloping us in 1950s New York City. Adam Stockhausen’s production design and Rena DeAngelo’s set decoration further immerse us into a city offset by longtime residents pushing back against the influx of Puerto Ricans into the local boroughs.

Themes of racism and territorialism still take center stage, with the Anglo-American Jets facing off against the Puerto Rican Sharks in a battle for neighborhood supremacy. Spielberg and screenwriter Tony Kushner make the divide a little more intimate by forgoing the heavy-handed graffiti and signifiers which announced their respective domains in the 1961 film. (Full disclosure: although Robert Wise’s 1961 version is one of my favorite films, I’ve never seen the stage musical.) Here, these neighborhoods seem to squash into each other, the lines between them ill-defined and more homogenous, making it more of a case of “when” they’ll bump into each other rather than “if.” 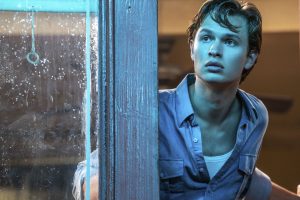 A seamless mix of location shooting and studio fabrications embroil us deep into a full-on warzone. The Upper West Side is being ripped up and renovated for more upscale residents; in contrast to how we know it today, the opening shot establishes the neighborhood as a bombed-out battleground that looks more like 1944 Germany than New York City in the 1950s. Aided by a lustrous use of practical sets and minimal use of CGI, this visual motif enhances and cements the conflict between the Sharks and Jets, lending the film ultimate realism and believability. 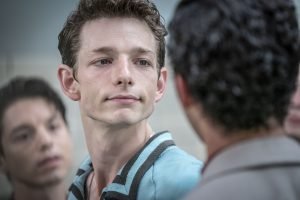 Amid it all are the two figures trying to bridge this chasm, Maria (Rachel Zegler) and Tony (Ansel Elgort), whose discovery of each other sparks off a whirlwind, tumultuous 24 hours which sees the best of humanity’s love and hate. A new bit of character development gives additional depth to Tony and his love for Maria, and it also gives a new angle on him trying to prevent the big rumble between the Sharks and Jets. These scenes are played nakedly and honestly with Zegler and Elgort shading their performances beautifully, defining their respective innocent and troubled souls which have finally found peace in each other’s presence.

While these two characters and actors are our obvious touchstones, the film is rounded out with spectacular appearances, from silent extras to the team surrounding Tony and Maria. Mike Faist is positively electrifying as Riff, someone who knows he’s on a violent track and doesn’t attempt to deviate from it. Conversely, Ariana DeBose gives so much hope, optimism, and life to Anita, the woman who sees the good in her situation and wants to make the most of it. As Tony’s bête noire Bernardo, David Alvarez makes his presence felt through additional development as a boxer and brawler; he further defines him as someone with no empathy or tolerance for anyone not on his side. Every actor is magnetic, right down to the random people whose only job is to react to dancers who suddenly take over a busy intersection while delivering an utterly soul-lifting rendition of “America.” 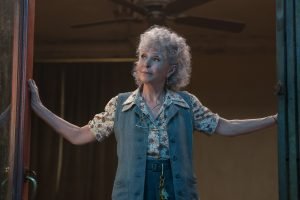 Please allow me to take a break here and tell you that I’m crying – yes, full-on crying – thinking about the many musical numbers and their various restagings and recontextualizations. “America” is a gorgeous standout, but it is an undeniable GIFT to see Rita Moreno – who played Anita in the 1961 film – singing “Somewhere.” Her performance of this song, the poignancy of her delivery, and the filming and editing of this number coalesce into a mutedly powerful showstopper, and seeing her rise to the occasion made me weep during our screening.

Leonard Bernstein’s music and Stephen Sondheim’s lyrics have stood the test of time, being as relevant and emotionally touching as when they were first heard in 1957. The intervening years have only added more meaning to numbers like “America,” “One Hand, One Heart,” “Tonight,” “Cool,” and “A Boy Like That/I Have a Love.” Maybe it’s just a symptom of getting old and growing up, but I don’t think so. Spielberg, Kushner, and Kamiński have given these songs more weight through their various staging and photography choices, absolutely flooring us with unmatched visual and aural power. 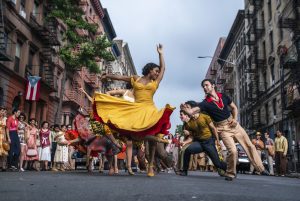 If you can’t tell, there’s a lot to champion about Spielberg’s West Side Story. The fact that Spanish speakers are not subtitled – thereby giving equal deference to the language – only gives this film more credibility and sinks the audience into the milieu Spielberg so carefully fashions. This isn’t just an update of the 1957 stage musical and the 1961 film; this is a totally new look at a familiar tale. The actors may have changed, but Spielberg’s heart is in the story and making sure the feel is totally right, resulting in a film that reaches deep inside your bones and grabs hold of you with no sign of relief. Steven Spielberg’s West Side Story finds all of its creative team and actors at their utmost best; together, they’ve made one of the most outstanding films of 2021.

P.S. Thanks to the ever-awesome Jenn Carlson, who gave me a hug when I was obviously emotionally destroyed by this film and then put on the 1961 film while I wrote this.