Posted by Eddie Pasa on December 23, 2021 in Movie Reviews / No Comments

Paul Thomas Anderson’s films are marvelous for one reason: the offhand way random events happen in his movies. A suicide jumper gets shot while falling? Yup. A drug deal where the tension is augmented by a preteen kid chucking firecrackers around a house? In Anderson’s world, it’s an ordinary nighttime scene in Los Angeles. A speeding car suddenly flips and crashes in the predawn morning? Just keep moving; nothing to see here. Anderson’s characters experience and witness the wildest things, but none wilder than love and the pursuit of it. 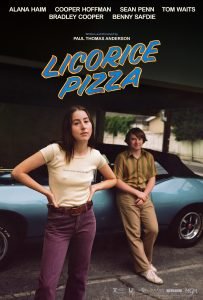 Everyone in all of his films, from his debut feature Hard Eight to his latest film Licorice Pizza is looking for their own version of happiness. It might be getting to the top of the adult film world; for another, it’s being a renowned clothier; for yet another, it’s watching over the son of a murdered man. In the case of Licorice Pizza’s 15-year-old Gary Valentine (Cooper Hoffman) and 25-year-old photographer’s assistant Alana Kane (Alana Haim), their version of happiness is simply finding their place in the world, whether together or separately.

Licorice Pizza reads a little bit like the best of teen hangout movies like Amy Heckerling’s Fast Times at Ridgemont High or Richard Linklater’s Dazed and Confused, in that the film is about everything important and nothing. This is a trip straight out of Robert Altman’s MASH, bouncing from one setup to the next connected by a strong relationship between the two central characters. Gary and Alana are our guides through young love and the uncertainty of not knowing what you want out of life. 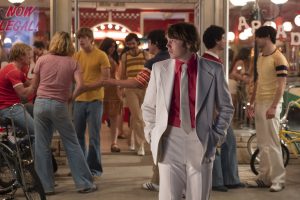 Gary’s easy to explain: He’s a child actor in high school undeterred by nothing, whether it’s an acting job, trying to strike while the iron’s hot with certain commodities, or asking Alana out to dinner. There’s a charisma he possesses which engenders trust and a sense of adventure in everyone he meets, from his casting directors to his friends who can’t believe he has the audacity to do what he says he’s going to do. He even faces down tough-guy film producer Jon Peters (Bradley Cooper, who received Peters’ blessing to play him as a horrible person) and still manages to stay on his good side.

People are drawn to him naturally, even Alana, to her disbelief. After meeting him in his school picture line and hearing him prop himself up to her, she finds herself taking him up on his request to join him at dinner that night. Of course, the “he’s just a kid” alarm should be going off, but there’s the promise of something fun – maybe it’s an assuagement of boredom, or perhaps she can finally treat him like her parents and older sisters (played by Alana Haim’s real-life family) treat her, or maybe she sees him as a forward-thinker who’s latched onto the selling popularity of things like waterbeds and pinball machines – that will come as a result of being associated with him. 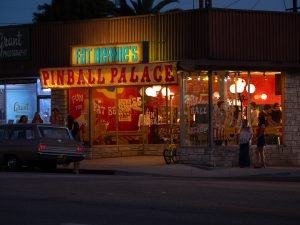 As much as Anderson’s script tries to keep her in the adult role, there’s a curious attraction between the two which mostly gets played off as just two good friends out for adventures. Neither tries to objectify or sexualize the other (except for one scene, and that’s quickly nipped in the bud); there’s actual love – even though it isn’t defined or spoken about as such – between them. They both do the kookiest things for each other, like driving a truck backward down the Hollywood Hills, getting jobs together, and at one point, smacking someone in the back of the head in a comedic display of affection. They’re together to entertain one another just by being who they are – a naturally loquacious showman and a repressed firebrand just waiting to show her spark to the world.

Cinematographers Anderson and Michael Bauman make this film look just as easy as Alana and Gary’s friendship, their frames capturing early ’70s Hollywood at its warm, sunny best. Much like Anderson’s previous films, there are a lot of long tracking and Steadicam shots keeping us right alongside the pair as they flit about town, involving us in the immediacy of their shenanigans while keeping a little distance to metaphorically show the smaller Gary against larger structures, emphasizing the world in which he’s placed himself and into which he still must grow. Alana dominates specific frames, maintaining deference to her maturity and age, but even she is made miniature compared to the world outside her skin, notably in one sequence featuring someone breaking windows in a fit of rage. 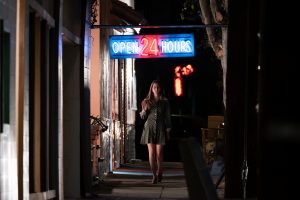 Which brings me to the casual sexism and racism portrayed herein. This being set in 1973, we see a lot of cultural and gender attitudes which no longer exist; these are played for laughs while making the perpetrators of this behavior insufferable idiots. Most of the time, you’ll be saying to yourself, “Oh, my GOD, did he really just do what I think he did?!” Especially after we see Alana’s lecherous boss slap her butt and two scenes in which non-English speakers are talked at by a particular character using terrible Japanese-accented English. It’s uncomfortable, but these people are brought in as examples of what Gary shouldn’t be as an adult. The fact that all of these people are in particular places to wield influence upon Gary and none of them rub off on him is to be considered.

Gary and Alana are two purely good people in a sea of backbiters, where loyalty only lasts as long as your popularity. They’re both still young enough to enjoy the wonders of a quiet walk in the company of someone who gets you, and they’re still young enough to screw it all up (which they do), but that’s the beauty of Licorice Pizza. It’s the matching of someone forced to grow up in a harsh industry and someone who’s not entirely grown up; somehow, they’ve found each other, and the awkwardness of them clashing provides enough emotional fuel to last the entire movie and beyond.