Posted by Eddie Pasa on November 5, 2021 in Movie Reviews / No Comments 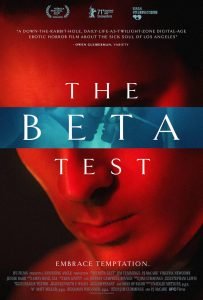 If you remember how you felt in the last ten or fifteen minutes of David Lynch’s Mulholland Drive – you know, where people have died and there’s a car crash and everything’s frenetically edited when the whole movie’s been kinda languid and people are screaming and others are laughing like lunatics and damn there’s the guy behind Winkie’s and it feels like some kind of surrealistic live theater production and everything’s gone bugf**k out of control and then itstopsonadime – congratulations. Welcome to The Beta Test.

Boy, that was a hell of a mostly one-paragraph sentence, eh? It tidily sums up directors/writers/stars Jim Cummings and PJ McCabe’s stylish, anxiety-jacked take on Richard Matheson’s short story “Button, Button” (and its popular film/TV adaptations). While not directly associated with or based upon the Matheson original, The Beta Test shares a similar plot concerning a selfish moral decision reaping dire physical and psychological consequences. In this, if one were to consider the “Button, Button” story as an alpha test… well, the film’s title speaks for itself.

Please note: I am not claiming this to be the filmmakers’ intention, and I heartily give my apologies to them for where my brain ran to when sitting down to write this. 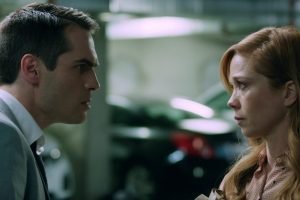 But the film’s terrifyingly brazen cold open lays it out as a woman nervously confesses receiving an anonymously-mailed invitation to have no-strings-attached sex with a stranger and going ahead with it a few days prior, followed by expressing her need to leave the marriage. Her husband’s response is to take the knife he’s using for dinner and nonchalantly slip it into her neck. The chilling disaffectedness with which he does this is extremely disturbing, not to mention witnessing the rest of the scene playing out to its brutal end, raising expectations for what follows.

This “cheat on your spouse and they’ll wind up killing you” setup is the reverse of the “push the button and someone you don’t know will die” ethos of Matheson’s story. Another reversal is that this is happening to rich people, not a downtrodden couple who wants to go on vacation or start a family. This opening prepares us for the straight-up assault directors/writers/stars Jim Cummings and PJ McCabe mount and carry out, but not by showing any worse violence than this. Instead, they weave the rest of the film with strands made of pure tension, stretching them well past their breaking points to make us bathe in the discomfort this movie inflicts.

For starters, Cummings is absolutely perfect as Jordan, the slickster Hollywood agent who’s got it all. To quote David Byrne of Talking Heads, he’s “behind the wheel of a large automobile with a beautiful house and a beautiful wife.” Only he’s not asking how he got there; we get the feeling his life has turned into a mere existence after getting to his own private mountaintop. A garbled dinner conversation with his fiancée Caroline (Virginia Newcomb), his best friend PJ (McCabe in an eponymous role), and PJ’s wife Lauren (Jessie Barr) flies in one ear and out the other; he’s not paying attention to it, and the muffled sound mix reflects that until his roving eyes land on a beautiful woman across the restaurant. (Either that or I’m going deaf, which is a distinct possibility.)

Jordan is a man of wants, and everyone not germane to these wants or in the way is ignored, glossed over, minimized, or angrily insulted, in one poor underling’s case. So when he receives the purple envelope with the card inviting him for a hotel tryst… yeah, he throws it away but winds up digging through a Dumpster to retrieve it. And in this sexily-lit and tantalizingly-edited encounter, we notice a present and passionate version of Jordan not evident in the rest of the film, and he wants to go back for seconds. 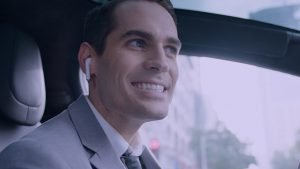 What follows is an undoing of all that he’s built himself up to be, growing increasingly more obsessive to the point of near insanity. He wants control over each and every moment – no matter if it’s with Caroline, a prospective client, his work colleagues, hotel concierges, or even complete strangers – and there is precious little to be had. The only time we see him willingly not in control is during his infidelity; it’s this vulnerability he seems to be seeking, even at the expense of hurting anyone and everyone. But his desire turns to paranoia and distrust after discovering shady machinations behind the purple envelope and why it was sent to him.

David Fincher’s The Game – minus its roleplaying cast of thousands – is another influence upon the film, portraying Jordan resorting to extreme measures to find out who’s making him dance to their tune, and also in forcing him to account for what and who he is, not his imitation of what he thinks is “life.” Jordan’s plastered-on smile – which seems to be vampirically growing at the canines – is a shield bared throughout the film to give himself a feeling of constant positivity and a kind of “every ‘no’ is just a ‘yes’ that hasn’t been said yet” sheen, but it hides an overwhelming insecurity running deep in his soul, similar to The Game’s Nicholas Van Orton projecting a calm togetherness which covers a dense thicket of self-doubt and loathing. The notion of maintaining one’s image is central to this Hollywood-based film and one that Cummings and McCabe satirize with aplomb, mining abject disgust from the lengths to which Jordan extends himself just to look like The Man.

The film eventually reveals its true face, which is a smidge incongruent with what has come before; it attempts an out-of-nowhere punch that doesn’t quite land but still stings. The Beta Test has a lot going on, and this late-game social commentary tries to let the participants off the hook in a desperate fashion. It throws the weight of the proceedings into a different light, making us ask if everything leading to this was purely a mistake and that Jordan’s crazed behavior and the results it yielded were meaningless. By this point, it almost doesn’t matter; we know the hammer’s going to fall and it’s just a case of who’s going to swing it and when. And as The Beta Test wraps up its morality play, we’re left drained after having witnessed Jordan being thrashed through a wringer of deceit and self-delusion, finally coming to a reckoning with the world outside his own skin (further enhanced by the 2.35:1 frame expanding at a pivotal point). This is a handsome gem of a low-budget, low-key suspense thriller, working well within its means and still managing to find the space to rise well above what it appears to be.