Posted by Eddie Pasa on November 2, 2021 in Movie Reviews / No Comments 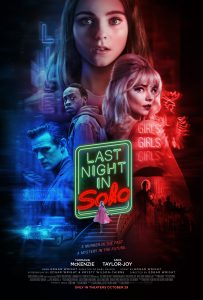 It could be said that Last Night in Soho is director/co-writer Edgar Wright’s homage to the color-saturated Italian horror and Giallo films of the 1960s and 1970s. A naïve girl is accepted into a school in a distant city, whereupon she is embroiled in a mystery reaching far beyond her ken; this is essentially the logline for Dario Argento’s Suspiria, albeit with central London taking the place of the Black Forest of Germany.

But in Wright’s film, there’s something more frightening to contend with than the witches in Suspiria; rather, it is the evil inherent in humanity itself, portrayed in how betters treat those considered beneath them. And it’s a mighty small scale as far as how much “better” these people in power are shown to be, whether they’re modern-day “mean girls” tormenting fashion school newbie Ellie Turner (Thomasin McKenzie) or the men she sees tormenting ‘60s singer/dancer Sandie (Anya Taylor-Joy) in her nighttime visions. 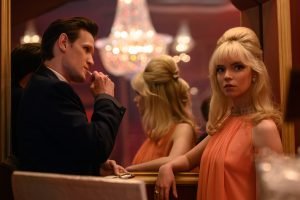 Wright and co-writer Krysty Wilson-Cairns fill the screen and our ears with sights and sounds of the Swinging Sixties, full of verve and color which ease us into this sinister tale of misfortune and slaughtered dreams. It’s a nightmare wrapped in the gauze of bouncy pop tunes and clever visual gags (you’ll wonder how a specific dance sequence was shot, edited, and match-moved with visual effects) which stress the time and personal differences between Ellie and Sandie. After having moved out of her student housing and into a bedsit rented to her by restrictive landlord Ms. Collins (Diana Rigg), Ellie begins having vivid dreams about Sandie, a 1960s singer who falls in with a man named Jack (Matt Smith) who promises her stardom, only to be used as a whore for champagne-buying punters.

Soon, the line blurs chaotically between Ellie’s waking life and the dreams/visions she experiences. Ellie’s no longer just Sandie’s reflection in the mirror in her dreams; she’s a witness to the undoing of this unsuspecting, misdirected girl who’s fallen prey to someone she was told would give her a shot at her dreams. We’re put through the wringer as we watch Ellie go from quiet fashion student to near-psychotic in a quest to perhaps achieve closure to Sandie’s tragic life. 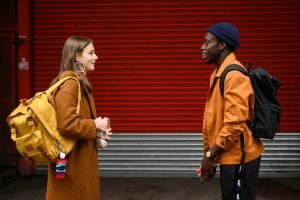 Her sensitivity to the supernatural is established by the Adventures in Babysitting-esque opening credits sequence featuring Ellie excitedly dancing in her room, interrupted by suddenly seeing her deceased mother (Aimee Cassettari) in the mirror and further alluded to by her grandmother Peggy (Rita Tushingham). This receptiveness allows Ellie’s discoveries to push her further to unravel what became of Sandie, a bright star used up for the whims of men. Sadly, it’s a well-worn tale of men using women’s hopes against them, forcing them (often by violence) into situations they didn’t bargain for or want.

There’s a John Woo-like duality represented by Ellie and Sandie – young women trying to break into their respective fields – that magnetically wraps us in their journeys. Both start out vibrant and eager, only to be forced to submit to their respective tormentors. Thomasin McKenzie’s performance goes from sweet, permissive, and unassuming to near-hysterical by film’s end, and the script gives her ample room to claw and scratch for every bit of sanity slowly disappearing from Ellie’s life. Likewise, Anya Taylor-Joy turns Sandie from confident chanteuse to trampled soul with believable gravity, and we mourn how Jack’s trap has snared and doomed her light. 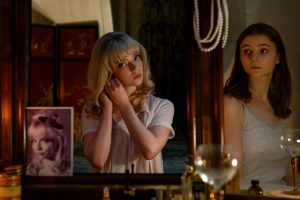 Known for kinetic and near-subliminally-layered films, Wright takes his opportunity to envelop us in the initial rapture of Ellie’s mind-trip, pulling us into Sandie’s world with sumptuous photography by Chung-hoon Chung and gorgeous production design by Marcus Rowland. While we’re made to feel alienated in Ellie’s surroundings – abetted most by attention-seeking roommate Jocasta (Synnøve Karlsen) – her ‘60s dream world feels lush, with warm reds and inviting textures playing up our innate feelings of a more loving, carefree time. But those reds take a darker turn toward the middle of the film when they start representing something darker, often mixed with blues to create a purple, off-putting vibe compared to the rest of the film.

The back half of Last Night in Soho is where more of the truly psychological terror (think Freud here, not just Hitchcock) comes to the fore. Visual references like knives and other phallic representations dot the landscape throughout (trains, soda cans, even cigarettes, for example); in this latter half, they start to take more prominence and become more of a statement than a subtlety. Paired with the screenplay, Wright’s visual motifs scream more about the injustice of the patriarchy than just a straight-out mystery (which this film truly is – nothing is given to the audience before it needs to be), and the final act brings these metaphors together in a meaningful, harrowing climax which at once provides catharsis and an extra layer of despair. 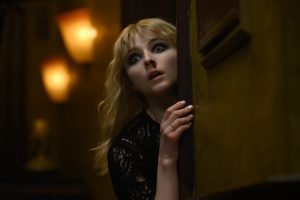 Edgar Wright’s seventh feature film is one hell of a blast, propelling us into the familiar offset by blinding color and discomfort. This is not an easily-digestible film by any stretch of the imagination; instead, we’re forced to reckon with the destruction of hopes and wishes, along with deconstructing preconceived notions at their roots and turning our expectations against us. Even the introduction to a pivotal character is shrouded in our own prejudices and raises our hackles. Last Night in Soho gives us a world where nothing is what it seems, and Wright is more than content to let us stew in our unease and let us have every bit of comeuppance coming to us.