Posted by Eddie Pasa on October 2, 2021 in Movie Reviews / No Comments 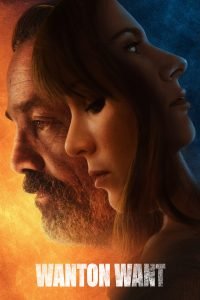 I’ve been reconciling my opinions and feelings about Wanton Want for the last five days. The synopsis looks very easy to digest: “Struggling to complete his magnum opus, affectless writer Douglas Paynter (Nicholas Brendon) joins his wife (Jackie Moore) on a weekend getaway to relax and reset, and hopefully break through his writer’s block. But when his estranged friend Dan Mackie (Phillip Andre Botello) and his alluring wife Pia (Shoshana Wilder) crash the retreat, a tumultuous secret and perilous obsession will propel Douglas from his comfort zone and his writer’s block, onto a journey of self-discovery and definement.”

If only it were that simple. Wanton Want suffers from over-convolution, flipflopping realities, and actors who speed so quickly through their lines and whose voices are mixed so unevenly; this combination of hurdles leaves you wondering if you missed something important. In between, we’re driven mad watching Doug slide into psychosis, annoyed by how Dan seems to have no speeds other than “sleeping” and “turned up to 11,” mystified by what Pia represents to Doug, and horrified by what Veronica has to suffer just by being Doug’s wife.

We’re told the story in snatches. Doug and Dan used to work a high-pressure sales job together before Doug quit to become a screenwriter. Veronica has just recently quit her longtime role on a popular soap opera. And who knows why the soft-spoken, extremely introspective and wise Pia has shacked up with an intolerable jackass who constantly puts other people down just to make himself look good? The whole movie, we’re subjected to Dan’s rants about his job and how cutthroat Doug used to be, and it’s also shown that he’s puffing himself up with his perceptions of how things were instead of the more sordid history behind his successes.

Writer/director Joston Ramon Theney drives headlong into the metaphysical as Doug slowly breaks down and loses his grip on everything – his decaying relationship with Veronica, the boundaries between him and Pia, his go-along-to-get-along “friendship” with Dan, and reality itself. Scenes play out in his head (noted by a high-pitched tone) as if he was seeing them occur in front of him, heightening his jealousy directed at Dan for his wealth, his pretty and selfless wife, how well he can slide into any given situation, and his ability to get whatever he wants (including, it seems at one point, Veronica).

Nicholas Brendon gives Doug a furtive, suspicious spirit that grows to raging proportions over the film’s running time. Doug’s turn from understated milquetoast to his overt idea of “alpha” gives good depth to his place in the life surrounding him, and it defines him as someone who never had anything to hold onto in the first place. His shell is filled with everything everyone gives to him, but nothing of himself. And when he tries to take control of what’s going on with him, it’s already too late – he’s decidedly lost any control he thinks he had, further damning him morally and completing his transformation into a figurative monster.

Shoshana Wilder makes Pia a magnetic, enigmatic being, someone who sees the truth of who everyone is beyond what their façades betray. Alongside Brendon, Wilder is the second-most watchable actor in this limited cast, shining with wisdom, a little sadness, and hope. Because of the muffled, badly-mixed dialogue, we don’t quite understand who she is to Doug – it’s intimated that he’s had a thing for her in the past, a “wanton want” of his, a concept brought up in a discussion between him and Pia which leads to a revelation about the heist screenplay Doug’s supposed to be writing.

Pia says of his screenplay that the robber has three choices: the money, the girl (not “love,” but specifically “the girl”), or freedom. This statement defines the film’s meta inner workings and helps unlock some of the mystery surrounding Doug and what he’s seeing (or what he thinks he’s seeing) happening between the four of them. However, by that point, we’re already so browbeaten by Dan’s antics, Doug’s shellshocked behavior, and Veronica’s barely-veiled contempt for what Doug’s become, we’re just hoping the film will end with no one hurt. Unfortunately, some of the worst gets unleashed in the final act, leaving a bad taste in the mouth as Wanton Want dribbles to its self-referential end. The actors do well with the material and elevate what parts of the script they can, but there’s only so much before the entire thing succumbs to living a half-life as a meager reflection of itself.