Posted by Eddie Pasa on October 6, 2021 in Movie Reviews / No Comments

I didn’t know what to say about Lamb before I started writing this; I never watched the trailer below, so if you do, you’ll go in much more forewarned and forearmed. It’s not a film you enjoy so much as experience; you’re not watching this one for anything close to resembling “the usual.” Billed as a “supernatural horror” film (which is a very loose definition of it), Lamb doesn’t quite fall under that strict description. Supernatural, though? Yes. Dissected, the film is a blend of horror, drama, and the blackest of black comedy, but at its heart, it is an honest and pure film about grief, burying itself in the solitude of the mind when one is mourning the loss of a loved one. 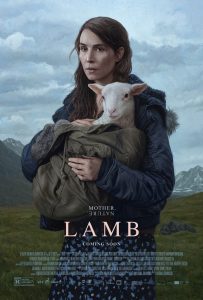 This metaphorical solitude is made manifest by the film’s location – a remote farmhouse in the middle of the Icelandic mountains, where husband Ingvar (Hilmir Snaer Guðnason) and wife Maria (Noomi Rapace) raise sheep. A thick silence passes between them in their everyday work and home life, and they speak only when needed – concerns about the tractor “making a new noise,” birthing a newborn lamb, and other duty-related mundanities. There is an abject lack of joy in their lives, but it doesn’t come from their jobs or their constant work at maintaining their living structures and the sheep they’re raising.

Something is missing from their existence, a better term for their near-robotic routine. It’s something that seems to have been lost forever, and the lack of it has created a fearsome chasm between them. But everything stops being status quo the minute one of their sheep gives birth to… something. We’re not shown immediately what it is, but it has a lamb’s head; Maria picks it up immediately, swaddles it in a blanket, and brings it into their home. 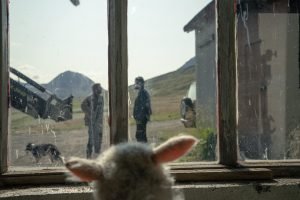 Over the next few days, we see them both acting like it’s a newborn baby, and you can guess (as I did) that the creature is something odd, like a faun (a cross between a sheep and a human). And you’re probably saying (as I did), “Did Ingvar f**k a sheep? Did I just cross into a Kevin Smith film or something?” (For those of you missing the reference, check out Jay and Silent Bob Strike Back from 2001.) No, Ingvar didn’t do… that. But because Lamb operates in near silence for much of the movie, we rely on inference, nuance, and scant glimpses of this newborn whatever until Ingvar’s brother Pétur (Björn Hlynur Haraldsson) comes to call.

The first time we see Pétur, he’s being thrown out of the trunk of a car on a desolate road somewhere near the farmhouse. As I said, Lamb’s modus operandi is inference and nuance; there are hardly any flashbacks to fill us in on information we need to fully flesh out the picture laid before us, a trait most daunting, but appreciable. But in his directorial debut, Valdimar Jóhannsson and writer Sjón Birgir Sigurðsson (an Icelandic poet and lyricist) seem very happy to simply drop us into their lives in media res and have us figure it out ourselves, leaving us to agonize in the film’s constant mystique.

Would this film have worked with gobfuls of exposition and dialogue to explain everything? No, and it would’ve been poorer for it. Lamb is unique in its delivery methods (no pun intended toward sheep birthing), asking more of us as an audience than 99% of films out there. Similar to Juno in Neil Marshall’s The Descent, Lamb wants you to make a dark, uncharted journey for an unknown destination with only the barest of essentials to guide your way.  We’re given just enough to at least understand certain aspects of the film (and even those tiny bits of exposition aren’t divulged in the usual way), leaving the rest of it to be figured out and puzzled over.

This exercise in sparseness would be nigh impossible were it not for the strong performances leading us through. A lot rides on facial, bodily, and spatial intimations, especially the relationship between Ingvar and Maria. The coldness which envelopes the film in the early goings soon turns to a tenuous warmth bearing actual smiles and near-bliss as they begin a new chapter in their lives with this unknown creature. We also see the fierceness we possess when it comes to protecting and fighting for what’s ours, even if you’re fighting a nagging ewe looking for her child. This fight is complicated by the rude intrusion of Pétur, who refuses to go along with what they’re doing, at least for a while. (And for a while, he does give Ingvar a look like he did what I described a few paragraphs ago, but there’s more behind his pointed glares.) There’s also some kind of tension between Pétur and Maria that gives us pause and makes us question his true intentions behind his visit. 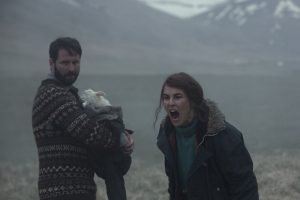 The film’s visual language (pay attention to the two shortest shots in the entire movie) tells us of the unthinkable trauma which has left their lives empty and without comfort from even each other, resigning themselves to going through the motions. It’s a languid, lingering pain felt through the lengthy shots which have the effect of causing discomfort in the viewer. Lamb goes against everything we know about films to unsettle us; we feel like we’re not supposed to be fixing our gaze for so long upon each shot, but editor Agnieszka Glinksa has cut the film to Johannsson’s intention: to smack us in the face without even raising a hand, to disturb us without relying on overt convention. Every time we want an edit to change our perspective and give us respite, it doesn’t come; instead, we feel every bit of the terrible loneliness and fatigue of grief.

Sigurðsson’s screenplay doesn’t give us what we want, but it does give us what we need – a solemn meditation of lamentation and the chance to be whole at any cost. With spacious photography by Eli Arenson and Glinska’s slow, exacting pacing giving us the precise mood and spirit (or lack of spirit, really) this film deserves, we are planted firmly in Ingvar and Maria’s internal struggles to make sense of their lives and to heal the irreparable damage wrought upon their marriage. Valdimar Jóhannsson makes brave and astonishing choices for his first effort, suffusing the audience with the oncoming dread of an anvil waiting to drop and crush whoever’s under it, drawing out malaise until we are screaming for relief. And when our wanted relief comes, it may not be something we want at all. But in the little big world of Lamb, this dearth of fulfillment is not only fitting, it is entirely necessary.