Posted by Eddie Pasa on October 19, 2021 in Movie Reviews / No Comments

Halloween Kills works best with a repeat viewing. Firstly, to watch it expecting the sudden shocks of relentless gore and violence; second, to focus on what director/co-writer David Gordon Green is giving us with this entry in his Halloween trilogy. While still obviously a slasher movie, there’s something else going on here about the cycle of violence and unsated bloodlust. Green continues injecting social commentary into this new batch of Halloween films; while it is slathered in blood and viscera by the barrelfuls, it has some barbed points he and co-writers Scott Teems and Danny McBride want to make. 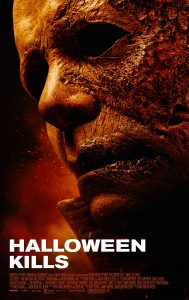 Strip it back to its core and you’ll find an extreme portrayal of territoriality and vengeance like no other. In keeping with the 2018 film’s posit that this set of movies is a straight continuation of the original 1978 film – meaning there are no familial connections between Michael Myers (James Jude Courtney and Nick Castle [who originally played Michael in 1978 and 1981]) and primary target Laurie Strode (Jamie Lee Curtis) – you have to wonder why Michael keeps coming for her when the only offense she’s ever committed against him was coming onto his property to drop a key off at the front door.

A forty-year chase – waylaid by a lengthy stint in the fictional Smith’s Grove psychiatric hospital – for a perceived trespass. Or maybe it’s because she reminded him visually of his sister Judith, whom Michael unexpectedly killed on Halloween night in 1963. It could be the spirit of a Druidic murderer whom the novelization of the 1978 film puts forth as the source behind Michael’s darkness. Regardless, the only world he knew was his home, and he’d do anything to protect it. The house is his den, his kingdom; woe betide those who set foot upon it. 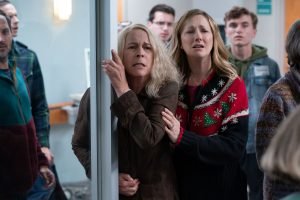 This is a brutal movie, with more graphic, senseless violence than its predecessor. But is it truly senseless? To most observers, yes. There’s absolutely no reason Michael needs to stab a freshly deceased corpse with as many kitchen knives as he can find while the decedent’s wife watches and bleeds out from a mortal wound herself. It is a detestable early scene, meant to show how destructively far around the psychopathic bend Michael is.

His derangement even contains a disgusting sense of humor, revealed in how he leaves dead bodies for other people to find, with a most disturbing example shown in the final act. It’s another layer of trauma survivors have to bear; it’s like he revels in knowing that they will be discovered by the people closest to them, and he knows the pain it will cause. His use of cunning misdirection tactics in his murders speaks of a severely devious and malicious mind. Michael Myers is no animal; animals don’t taunt their victims with carefully staged crime scenes. He is without any sense of morality, the cruelest evil in human form, lacking any compunction over vicious killings and never showing a hint of remorse for the disfigured and dismembered he leaves in his wake. 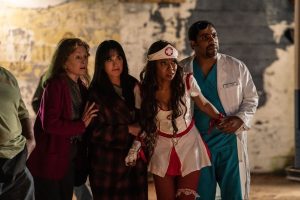 It is an evil that has engendered a deadly undercurrent of unfulfilled revenge in Haddonfield’s residents, having lived for 40 years under the shadows of the Halloween massacre. Laurie’s grown-up babysitting charges Tommy Doyle (Anthony Michael Hall) and Lindsey Wallace (Kyle Richards), along with former nurse Marion Chambers (Nancy Stephens) and former bully/Cameron’s father Lonnie Elam (Robert Longstreet), have gotten wind of the night’s occurrences and formed a vigilante group to exterminate Michael after he escapes Laurie’s burning house. And it doesn’t take too much of Tommy whipping the citizens up into a “This is OUR town!” frenzy before all hell breaks loose.

Halloween Kills shows us how easy it is to step over the line into cold-blooded murder. There isn’t much separating the kind of drive to kill that Michael and Tommy have; while Michael keeps his slow walk toward his goal, Tommy’s single-minded fury (to cop a phrase from Stephen King’s Christine) likewise puts him in this position of having nothing but death in his sights. Innocents and combatants are spared nothing in their respective vengeance missions, with evil’s corruption settling deeply into the hearts and souls of hunted and hunter alike. 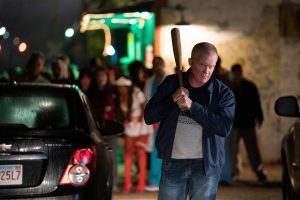 Easily co-opted chants of “Evil dies tonight!” and the rapid fervor which Tommy hastily stokes within Haddonfield’s populace are eerily reminiscent of the latter-day American sociopolitical landscape. We are a polarized country, with each faction vilifying the other and no middle ground to be spoken of. Those who warn us against rashness and action without evidence are overpowered by voices amplified by anger and fear. Reason does not seem to exist anymore, either in Haddonfield or America; there is only the need to make “the other side” pay. The body of Halloween Kills is entirely fabricated from this vein of mistrust and hate, and it’s made all the more unsettling by the ever-increasing kill count Michael racks up.

Within the film are numerous callbacks to the 1981-2002 series sequels, all of which have been rendered moot in David Gordon Green’s trilogy. Laurie getting sidelined in the hospital and made inactive recalls 1981’s Halloween II, which treats her the same way. Silver Shamrock masks from Halloween III: Season of the Witch are prominent throughout the first half of the film. Halloween 4: The Return of Michael Myers‘ influence is felt through the town mob and their actions. Various kills, camerawork, and staging readily bring to mind past iterations of these same sequences – e.g., the last shot before the opening credits start (a visual nod to the last shot before the 1978 film jumps forward in time), Marion being attacked in a car, Michael’s sudden and uncharacteristically quick movement to choke a victim, and other script and visual cues reused for Green’s retelling. 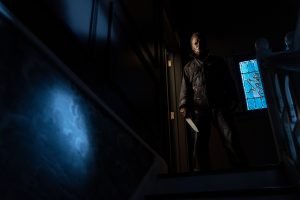 This is the ramp-up before a blowout conclusion, the twists and turns in a rollercoaster that bang you around before crawling up the hill for the final drop. It feels intentionally incomplete and leaves us dangling, forgivable traits in light of the third movie waiting in the wings. This film’s purpose is to raise the stakes to incomparable levels where no one – not even a beloved character or two – is safe, and it succeeds horrifyingly. Halloween Kills lives up to its name with its unbelievably and excessively violent nature, preparing us for next year’s showdown between predator and prey.