Embarrassing disclosure: I was under the impression Midnight Mass was a film, not a television show, which is why I requested to write about this. I don’t usually review TV shows, so this might throw you off a bit. (Truth be told, it’s throwing me off bit, too.) How do I have any kind of authority to talk about a TV show when 99% of my reviews on here are about feature films? (Note to self: Was Doc Warman [RIP, good sir] right about your attention span?) 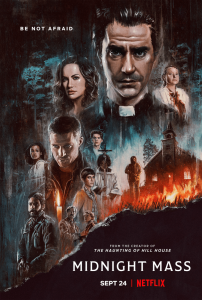 Another disclosure: I have long appreciated Mike Flanagan and his voice. From Absentia through to this series, Midnight Mass, Flanagan has imbued his horror stories with a Stephen King-like richness in each story’s patois, an elegiac and somber tone highlighting the struggles of his characters, and the hazy path to redemption its heroes must take while learning to navigate their world and their strange circumstances. All of Flanagan’s films and TV shows are tinted by the supernatural (save Hush) and feature characters suffering from emotional or physical trauma, and much of each story’s spirit is found in the reconciling of the otherworldly with the damaged.

It’s as if Flanagan himself is searching for the “why” of human nature, reaching through a well-lit stage’s curtain into the darkness beyond, brushing against the specters of the evil that humans commit in a misguided pursuit of the divine or the perfect. These specters have grabbed his hand and guided him into places so familiar to us, with stories and personalities not far from those we experience every day. He evinces this horror through slow revelations, allowing his characters to take their time with us to give a full sense of who they are and what the narrative thrust – whether it’s a haunted house, a silent intruder, a cursed mirror, or a priest who brings miracles with him – will mean to each participant in the dance he so carefully choreographs. 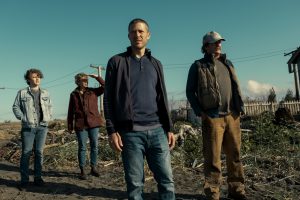 With Midnight Mass, Flanagan is given seven episodes in which to cast his languid spell over us, doling out the horror by steps, not by leaps. A glimpse of a shadowy figure here, a ghostly pair of eyes there – it’s all we need to know that something’s not right on Crockett Island, home to a small-town fishing community replete with its own idiosyncrasies. But we’ll hold on the scary-type stuff for a second; the first few episodes seat us firmly alongside the island’s citizens, keeping the town’s lore simple with scant thimblefuls of exposition. Every conversation doesn’t just fill in a backstory; they’re meant to tell us who each character is, what they believe, and how they see their world.

Cinematographer Michael Fimognari’s long, unbroken takes of dialogue underscore Crockett Island’s claustrophobic surroundings, showing that no character has a way off without external help. The shack houses also emphasize the smallness of life in the community; there aren’t any McMansions, let alone any modern convenience, clothing, or electronic stores, reserved only for the unseen mainland. Not even Sheriff Hassan’s (Rahul Kohli) office has its own independence, his desk and the one-cell jail being located in the back of the island’s sole grocery store. Everyone’s on top of one another and there’s no avoiding anyone, whether it’s local drunk Joe Collie (Robert Longstreet), thunderingly judgmental church assistant Beverly Keane (Samantha Sloyan), or convict Riley Flynn (Zach Gilford), recently paroled after a horrible drunk-driving incident.

There aren’t any folks untouched by the falling fortunes of the island’s fishing industry (except for maybe one person), which also plays into how reliant the people are upon the one establishment on the island – St. Patrick’s Catholic Church – that seems to be the town’s only source of inspiration. It’s also a source of tension, as new priest Rev. Paul Hill (Hamish Linklater) has just arrived in town to replace the church’s aging pastor, convalescing after a trip to the Holy Land undertaken as a bucket list item to be crossed off before succumbing to the ravages of old age and dementia.

You’d think that Rev. Hill is going to be our audience proxy, the window through which we see this tiny microcosm. Instead, he becomes just as much of a cog in the wheels of Crockett Island as everyone else; we maintain his throughline while stories are spun around him in a community that starts to slowly change. It is the citizens reacting to his presence and the sudden onslaught of true miracles – some small and barely noticeable at first, some so large that they bring the “Chreasters” to church every day for morning mass – that makes up a lot of the horror of Midnight Mass. The exclusive proximity to seemingly God-ordained interventions almost brings a deluded selfishness to those closest to these occurrences, glorying in the light of self-righteousness while committing atrocities or turning a blind eye to them. 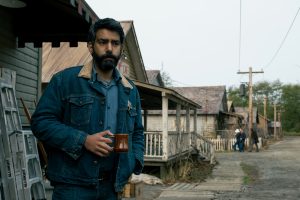 Midnight Mass isn’t so much about the supernatural as it is about the thing in our minds which rationalizes and makes peace with what’s happening to us in our darkest hours, molding our situations – and reality in general – to what we believe. It’s also an indictment on how we act upon this molded reality, our belief acting as a shield we think will protect us from outside influence or harm and give our voices the strength to be heard, whether our words are poisoned or not. The Flanagan-typical supernatural is there as both a horror to be dealt with and as a metaphor for the evil we allow because it’s on “our side.” We’ve seen a lot of that kind of thing in recent times, and Flanagan slyly injects his story with this telling reflection on the tribal protectionism that has inarguably split society nearly irreparably.

But there’s also the fight to do the truly right thing, even unto suffering and death, embodied by those who stand up in the face of evil when everyone around them is on a different page. Lest you think otherwise, Crockett Island isn’t just full of the spiritually corrupt or the morally flexible; there is valiance everywhere in people whose hearts are good and caring, even though our own preconceived notions might color them differently. Flanagan doesn’t seek to single out religion as a villain, nor mock it; instead, it is the mistakes we make and the people we hurt in the name of belief on trial here. 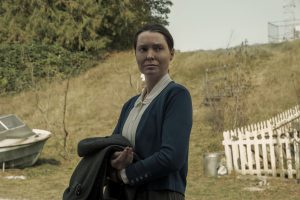 Midnight Mass is, quite simply, perfection. Its unshakable cast inhabits these roles with grace, gravitas, and sanctimoniousness that pushes us to extreme love or hate for them. As the near-Margaret White-esque Beverly, Samantha Sloyan creates a character so thickly laden with a false sense of moral and spiritual superiority, we absolutely accept that she cannot see past the ends of her own eyeballs with how full of herself she is. To Sloyan’s credit, she mines the best and the worst of the two-faced “religious” charlatans we see in the news every day and combines them to be Beverly, resulting in the most hate-worthy character in any medium.

Hamish Linklater likewise creates an impressive, enigmatic figure in Rev. Hill. He strikes the relaxed, yet anxious posture of a man who knows that he’s the leader of a flock and at eager to lend a hand with that knowledge. Linklater’s speaking tone and presence are that of the priests from my childhood, soft and encouraging but rising to a feverish yet laser-focused pitch when delivering the words he so needs his congregation to hear. Alternating between a haunted sadness and the courageousness required to lift the attendees at St. Patrick’s into the light, Linklater puts forth a performance that is, for lack of a better term, extraordinary. On every level. 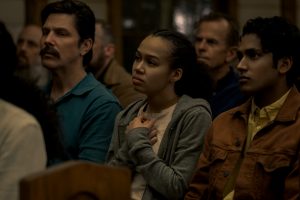 These two are but small examples of the kind of ensemble Flanagan has chosen with pinpoint accuracy to fill our screens with the real. Every actor fills their role with purpose and integrity, bolstered by Fimognari’s specific framing choices. The offset tête-à-têtes between Riley and Rev. Hill aren’t offset just to look different; there’s meaning behind why Fimognari and Flanagan want us to see these conversations and others like it the way they want, each mise en scène staged for maximum effect, whether subliminal or overt. Flanagan, who also serves as editor, shows a wisdom in letting certain scenes go on at a hefty length, whether it’s a shoreline evaluation of a recent calamity or something as simple as watching Ed Flynn (Henry Thomas) walk away from the church’s rec hall.

The Newton Brothers’ plaintive score is a character in and of itself, pinning scenes with mournful solitude and drilling us with musical stings which serve their jolting purpose. It’s not an overwrought kind of score; it is surgically targeted, never overpowering a scene, becoming instead a participant with every note played. Music is an important part of church worship, and Sunday morning hymns are given a dual role, both to empower the churchgoers and to add a subtle, nuanced twist to a sequence’s intent. 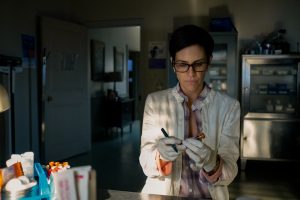 Midnight Mass is a masterpiece in episodic television. It is a rare piece of art where every element – acting, cinematography, editing, music, writing, production and costume design, and every other above/below-the-line effort – is working in perfect concert. There are no missteps taken in any of this show’s seven episodes; it follows its own rules and entrenches us in this secluded world where the line between right and wrong is blurred by belief and prejudice. By self-importance and jealousy. By perverting the sacred for one’s own greedy ends. And by misguided belief in what we project to be the divine. Flanagan speaks with a very personal and pointed voice with Midnight Mass, a marvelous triumph and undoubtedly his best work yet.