Posted by Eddie Pasa on September 24, 2021 in Movie Reviews / No Comments

“Lie become truth only if person want to believe it.”
— Nariyoshi Keisuke Miyagi, The Karate Kid

High school sucks. You’re in a different world, away from the safe confines of grade school where everything made sense for all those years. Now, there are sports, clubs, dances, A.P. classes, theater productions, and all other manner of extracurricular activities designed to help you to find yourself and what your “thing” is. The “thing” you want to do for the rest of your life. And sometimes, well… none of it works. If you do happen to find it, it’ll be years until you actually start doing it for a living, and the time in between can be a cruel mistress. 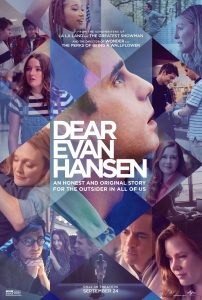 Of course, you do anything to make it work for you. You create scenarios in your head, you wish things could be different – but all of these thoughts don’t come anywhere close to how your life is working out. You want to be the guy or girl everyone likes or at least tolerates to the point where they’re not trying to slam you into the lockers when they pass. And sometimes, you lie to yourself to make your life somewhat workable.

What happens when the lie you tell yourself grows beyond your head and gains a life far beyond anything you expected? Do you protect it, or do you tell the truth? The musical Dear Evan Hansen goes over this exact subject, concerning itself with a high school nobody who’s suddenly thrust into the spotlight because of a comedy of errors. It’s almost Shakespearean, isn’t it, along the lines of Twelfth Night or something like that, right? And the lies compound lies until the narrative is no longer controllable and you can’t do anything but crumble under the truth when it’s finally exposed. 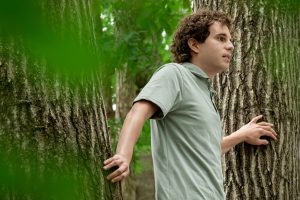 When you look at the heavily medicated, socially anxious life Evan Hansen (Ben Platt) has to bear, it’s almost too predictable. He’s an outsider, perpetually on the fringe but not enough of an entity to count in others’ eyes. Not even the bullies want a piece of him; they’re too busy picking on another kid, Connor (Colton Ryan), whose locker’s across the hall from Evan’s. Connor and Evan are somewhat similar – both have endured trauma and are receiving some kind of treatment for it, but where Connor lashes out, Evan’s the exact opposite, retreating into himself and finding the comfort therein.

They only have two encounters in the first act of the film, both resulting in Connor getting in Evan’s face and screaming at him. But the second encounter starts off with Connor trying to forge a bridge, signing a cast covering Evan’s broken wrist while saying, “Now we can both pretend we have friends.” It’s a bridge that might have seen completion were it not for Connor finding one of Evan’s therapy assignments on the school printer. Evan has been assigned to write himself letters – starting with the greeting line “Dear Evan Hansen” – for self-encouragement. This particular letter, though, reads more like a suicide note, wondering if anyone would notice if he disappeared altogether. And when Connor reads it and sees a portion mentioning his sister Zoe (Kaitlyn Dever) – a girl for whom Evan has long carried a torch – he throws Evan to the floor and storms off with the paper… which is found on him after he takes his own life. 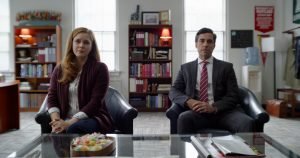 Believing it to be written by Connor as a suicide note, Connor’s grieving parents press Evan to reveal their friendship, which Evan makes up out of thin air to make them think their son was a good kid and had a friend. He’s unwilling to tell Connor’s parents the truth, that Connor stole it from him in a fit of anger. The attention they turn toward Evan begets a cavalcade of lies he has to continuously invent to maintain this charade and to stay in everyone’s good graces. And by everyone, I mean everyone – not just Connor’s parents, but the entire school community, and especially Zoe, with whom Evan starts spending more time.

One minute, Evan’s a nobody; the next, he’s the closest thing Connor had to a friend; the next, he’s going along with it, not exactly milking it, but being an active participant in the ever-expanding deception; the next, he suddenly has everything he wants – friends, parent-figures that spend more time with him than his own mother, and Zoe. He knows this is wrong, but he’s too eager to please everyone, to make sure people are happy. It’s human nature, to want to let people down easy or to not let them down at all, isn’t it? 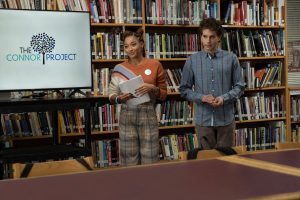 But what Evan thinks he’s doing – creating a hero that Connor’s parents can believe in, someone misunderstood and overlooked – is quite different from what he’s actually doing. He feels like he’s in a place where he belongs for the first time ever, and he’s got to keep that going, even if it means more lies. In that, what we’re seeing is nothing more than a less-criminal version of the kinds of scams pulled on people at their most vulnerable after the death of a loved one. Evan’s lies create an almost mythic figure out of Connor, a boy shown to be violent toward his family and anyone who looked at him wrong, a boy whose own sister can’t remember a single good thing about him. By the climactic rendition of “You Will Be Found,” we’ve forgotten all about this side of him, as the film refuses to acknowledge the danger Connor represented if left unchecked.

The other big issue is that director Stephen Chbosky seems more interested in selling us on the idea of Ben Platt as Evan instead of letting the film be. Because of this, it becomes a movie that forces, not leads viewers into its story, thus becoming alienating as Evan digs his hole deeper and deeper. We’re never given any personal or emotional stake in the film, which seems to go from music number to music number without any depth imparted to the proceedings. It’s all go, no show, no chance to stop and take stock of the weight behind every decision Evan makes, or for him to fully internalize what’s happening with Zoe or her family. 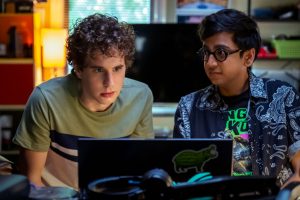 But there are terrific aspects of the film which get swept along in the thundering tide to condense this play into a movie. Fellow student Alana (a wonderful Amandla Stenberg) reaches out to Evan to show him that he’s not the only one caught under the cloud of medication and mental illness. A groundswell of support from similar students reinforces that they’re not alone. And Evan’s lies have the unintended effect of allowing Connor’s family to grow closer and more open with each other after having been closed off because of the way Connor was to them.

There’s an episode of “Buffy the Vampire Slayer” in which she tells a suicidal student, “Every single person down there is ignoring your pain because they’re way too busy with their own. The beautiful ones, the popular ones, the guys that pick on you… everyone.” For me, Dear Evan Hansen earns goodwill for peeling this layer back and showing the pain that modern-day kids feel because of the pressures of school, society, parents, and their own peers, and especially for showing how they deal with it. It doesn’t do it as well as John Hughes’ The Breakfast Club, but then again, what film does? The Breakfast Club got down to the root of high school angst, shoved it in our faces, and made for damn sure we understood. And that’s what’s truly wrong with Dear Evan Hansen. Instead of diving into the heart of trauma and its consequences, it merely brushes the surface of teenage pain and glosses over it with a sheen of finely-tuned musical numbers.