Posted by Eddie Pasa on September 2, 2021 in Movie Reviews / No Comments

The first paragraph of my review of Kenneth Branagh’s 2015 live-action Disney reimagining of Cinderella contains this sentence: “This is definitely not a modernized, jaded, snarky take on the Cinderella story; for those of you wanting the full-on fairytale, where the noble are just, the damsel in distress is saved, and all get their just deserts, this is the one you want.” Well… welcome to the complete antithesis of Branagh’s sumptuous and delightful adaptation of Cinderella. 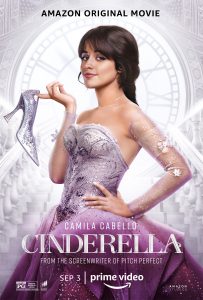 Written and directed by Pitch Perfect series scribe Kay Cannon… well, that’s really all that needs to be said. Cannon ports her penchant for jukebox musicals and backbiting comedy over to the famed fairytale, but there seems to be no thought put into it, from the casting to the sets and art direction to the photography to the performances. It’s a wildly inconsistent film in both form and function; not that I was expecting any effort to match Branagh’s captivating film from a mere six years ago, but I at least was hoping for something a little better than “thrown together just to capitalize on what’s hot.”

And that’s what Cannon’s Cinderella feels like from minute one: a greatest hits collection of pop culture, with piped-in musical nostalgia reshuffled and rearranged for modern ears. Valiant themes of self-reliance, gaining the strength to fulfill one’s dreams, and shaking up the patriarchy deserve more than the cut-and-paste job that Cannon does here. Her attempt to shove them all into a flip, breezy package results in a film which makes a mockery of itself while trying to pass itself off as fresh. 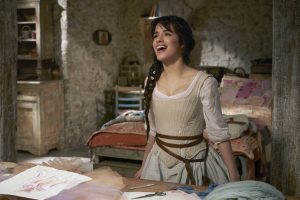 If you look at this version of Cinderella as not a serious theatrical competitor, but rather something aiming to be a peer of Netflix Christmas-themed, mistaken identity fantasies or Disney Channel teen flicks, then it succeeds heartily. There’s no personality to this film, no unpredictability, no darkness; it revels in sunny, well-lit set pieces which sweep any kind of untoward notions under the rug. It’s almost as if Cannon were specifically herding the production away from any kind of ill feeling, aiming for the ultimate happy film without showing us any defeat or devastating personal shortcomings to make the victory actually mean something.

Not even villainous stepmother Vivian (Idina Menzel – and how dare this film treat her voice with as much Auto-Tune as it does) is all that villainous. While written as a survivor, doing anything she can to keep her children – even stepdaughter Ella (Camila Cabello) – fed and of a marriageable position, there are cracks in her that grant her a bit more humanity than past iterations of the character. Her “I suffered and found out how the world works” outlook has shut her heart off from the possibility that anyone can change their fate, which makes her the most tragic and watchable character of the entire film. Cannon’s script gives her incredible nuance and depth, but she also falls victim to the latest trend of not making anyone completely, off-the-deep-end, irredeemably evil. 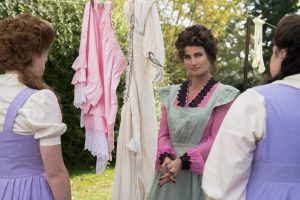 Her daughters don’t come anywhere close to the nasty, haranguing, slap-happy dicks we know from various retellings of this story; even though they make their scorn for Ella plain, they’re still able to recognize a step too far in the way Vivian treats her. Again, a lack of true animosity blunts the conflict, with Cannon making sure we see both good and bad sides of these stepsisters, slowly turning them from pains in Ella’s ass to sympathetic over the course of the movie.

This version of Ella is a dress designer looking to use her creations as a way to get out from under her stepfamily and to establish herself in a male-dominated world. Heavy-handed patriarchal types – aided by the women working for them and by others who don’t understand her – swiftly descend upon her and tell her that she’s got no place in business. Seeing as how Camila Cabello can sing (anyone remember Eddie Murphy’s discourse about Elvis Presley and the movies he did?), this movie rides upon her baring her soul not through spoken dialogue, but through soundtrack-selling showstoppers, all delivered in her indistinct Top 40 style (which I’m not a fan of, but it’s a style that’s popular these days, so I’ll just go with it) and with a small amount of fervor behind her vocals. 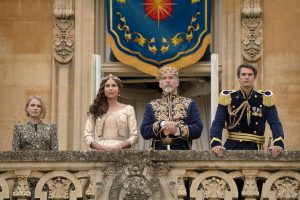 As the story goes, Ella has to fall in love with the prince, right? This quickly-established romance feels even more throwaway by Nicholas Galitzine’s definition of Prince Robert, devoid of any kind of persona or gravitas; it’s no more a role than a chance to preen in front of the cameras and play a dudebro looking for love. We feel nothing for this boy becoming a man, as he’s not given a chance to truly grow. Sure, we get that he’s willing to sacrifice his right to the crown for a shot at true love, but the way his choice is considered, played off, and ultimately accepted is buried under contrived comeuppances and overblown theatrics.

The problem is that every actor feels more “placed” than “cast.” Cannon doesn’t seem to be interested in performances, making everyone – from Pierce Brosnan on down – ham it up and push for maximum outrageousness. And if they’re not there to chew scenery, then stunt casting – like 2020 viral drumming sensation Nandi Bushell, featured in one sequence and left out of the rest of the film – is used to juice the audience’s senses. The only actor who feels at all like they belong to and in this movie is Billy Porter, being every bit the fairy godmother – in this film’s terms, the “Fabulous Godmother” – we hope he is. Porter is truly a lift this film sorely needs, the only actor and character in this film with true personality and magic. 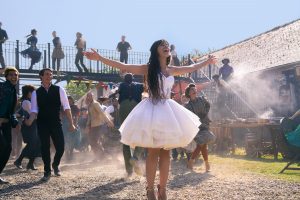 This film feels made to sell CDs and digital downloads, a quick turnaround for an even quicker buck. (Seriously, I never thought I’d live to hear Janet Jackson’s “Rhythm Nation” disrespected by being used as a setup which leads to nothing, but I guess I was wrong.) In that, Cinderella doesn’t want to be anything more than the made-for-cable film that it is. There is nothing which makes us want to care for any character or their situation, and the film is rendered utterly disposable by a morbid lack of genuine emotion. Cannon wants this film to be relevant and punchy, but somehow forgot to put any kind of muscle behind it, angling for trite, paint-by-numbers, .gif-able content instead of something fresh and resolute.