Posted by Eddie Pasa on August 26, 2021 in Movie Reviews / No Comments

As we continue to dig out of the COVID-19 pandemic, it’s obvious that the cinema world will have something to say about what we’ve gone through and what we’ve become. There have already been more than a few pandemic-based films of varying quality – some shot on Zoom, some shot with traditional methods – but none of them come off more acerbic than Together, a film shot using one location and three actors. Most of the pandemic films so far either put their leads in the position to be with someone they love or a friend… but what happens when you’re locked down with someone you can’t stand? 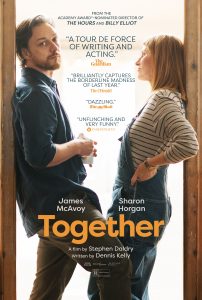 Together‘s characters and story seem straight out of a Nick Hornby novel. Hornby, famous for his novels-turned-films High Fidelity and About a Boy, usually writes about misanthropes stuck in a situation they abhor while trudging toward the feeblest glint of light at the end of a very long, dark tunnel. These novels never turn out the way you might wish – to my knowledge, none of his books have a big happy ending where love conquers all – but at least there’s some semblance of hope and good at the end.

Similar to the filmed adaptation of High Fidelity, any notion of a traditional narrative is dispelled by both He (James McAvoy) and She (Sharon Horgan) rounding on the camera and talking straight to us. It’s almost like the Zoom chats we’ve had over the last year, only with a roving camera and no pixelization or internet dropouts. After a series of short establishing shots, Together properly starts with a long, unbroken take (there are only 204 edits in this film from the opening shot to the final cut to black) featuring He and She expressing in no uncertain terms how much they hate each other. Whether it’s one’s physical features or one’s way of eating, they hold nothing back in telling us and each other what it is they despise about their mate. 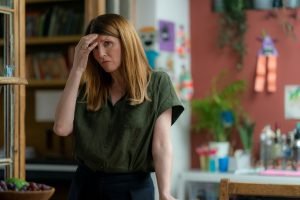 They’re not married and their intense dislike for one another seems insurmountable, so why are they locking down in the same place? Well, there’s their child, Arthur (Samuel Logan), who stays out of the way for the most part, serving as the tenuous glue keeping He and She stuck together. Even though he doesn’t have but maybe two or three spoken lines, his presence hangs over the couple in every bit of dialogue, every plot point, and every confessional they give to the camera. This also gives us a slight hint that maybe things might work out for He and She; both of them would be lost without Arthur (whom He calls “Artie,” much to She’s chagrin), and they both know it.

The film has a very live-theater feel to it, with scene changes bearing intertitles marking the date and the number of COVID infections and deaths. Each scene change opens another day in their lives, and each day brings a new set of problems or revelations that He and/or She recount to the camera, captured almost entirely in cinematographer Iain Struther’s captivating, unbroken Steadicam shots which whirl us from the front hallway to the kitchen to the dining room to the living room to the patio (where He has started growing vegetables – sound familiar?). These chats to themselves and us spare no one’s feelings, whether their subject matter has to do with a case of mushroom poisoning, sex, the COVID death of a loved one, the inanity of their lives during lockdown, or the truth about their relationship – there’s an acidic, backhanded honesty which they whip each other (and us) with, leading to guffaws and shock at nearly every turn. 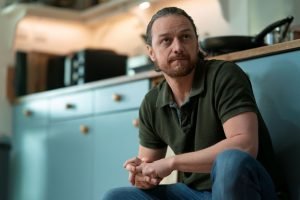 There’s usually a point during these fourth wall-breaking monologues where they stop talking to the us and start talking to themselves, which is where Daldry and editor Úna Ní Dhonghaíle start moving a little faster with their cuts and opt for different camera angles, severing our contact with them and kicking the film into third-person narrative. It’s in these moments where He and She drop the pretenses and show that there’s a lot more care – and, dare I say, love – between them than they’d like to believe. But just as each scene climaxes and their conversation ends, we’re slipped right back to where we started, each of them allowing us to be a part of their reaction to what’s just been said.

Dennis Kelly’s vast, chatty script runs the gamut from verbal punches and knives being thrown to softer, more personable moments and everything in between. There’s no physical violence to be seen, but the caustic invective He and She hurl at and about each other more than make up for it. James McAvoy and Sharon Horgan seem right at home with the mouthfuls they have to deliver, whether it’s with each other or a one-on-one with the camera. As I said, this film feels like a live theater production, and both actors use their stage backgrounds to enveloping effect, engaging us from the very start and holding us in their grasp until the bitter end. The tone shifts required with each developing plot point are handled with ease, and the natural humanity that flows from them – even when they’re at their most insulting – impart a tactile believability to their circumstance. 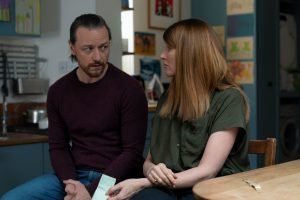 This humanity is what drives Together‘s heartbeat. It’s not jokes, jabs, loss, suffering, or the shortcomings which get laid bare and used as verbal weapons; it’s two people getting down to what’s real instead of the superficial. As the film moves on, we drill further and further down to aching truth and realizations which alternately hurt and heal. Their sardonic fronts are chipped away until there’s only the two of them facing each other’s and their own true selves. While they may not like what they see in themselves or one another, at least the pandemic has forced them to stop running figuratively away from each other and confront what’s between them. And that, my friends, is why Together is epic journey to a distant land and back again without ever stepping out the front door.