Posted by Eddie Pasa on August 13, 2021 in Movie Reviews / No Comments

Hats off to the late director Benny Chan, whose memorable films include a high-flying remake of Fist of Fury with Jet Li, a passel of Jackie Chan movies (among them Who Am I?, New Police Story, and Rob-B-Hood), and others which stocked a full 30-year career. Benny Chan’s final film, Raging Fire, is released today around the world, a fitting farewell to this legendary filmmaker who brought us different sides of our favorite martial artists and used them against our expectations. 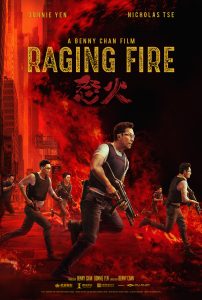 With New Police Story, we saw Jackie Chan take a totally opposite turn against his usual happy-go-lucky role and dive into playing an embittered policeman with horrible baggage to tote around. Benny Chan’s screenplay for Raging Fire reads as an almost beat-for-beat remake of New Police Story, slamming martial arts wizard Donnie Yen into the hard-boiled cop role. The similarities between the two films are hard to deny, but there’s a different ethos in each of them which more than satisfyingly separates them and makes them stand out on their own.

Bear with me here. We have a good detective who loses his team in a tragic shootout, and the detective is made to dance to his antagonist’s tune with little mental games, especially since said antagonist has ties to the police force. The detective’s significant other is put into direct peril as a result of these head games, and the antagonist slowly loses faith in his team to the point of executing one of them because of mistakes that bring the police closer. And everything culminates in one final job which the detective has to interrupt, leading to a bone-shattering showdown of epic proportions. 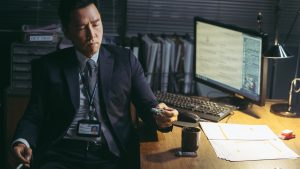 At the heart of it, this is the skeleton from which both New Police Story and Raging Fire are shaped. But Benny Chan does something special with Raging Fire, and that is to put Donnie Yen into a role reliant on emotion and nuance, his martial arts prowess taking a backseat to the story and pushing for a realistic portrayal of a conflicted professional. Yen plays Detective Cheung as a regular guy who’s good at what he does, but it’s the little moments that define him – a mischievous exchange with his pregnant wife Anna (Qin Lam), his devastation upon discovering his massacred detective squad early in the film, and the guardedly cautious manner in which he treats his former protégé Ngo (Nicholas Tse).

Some years ago, Cheung and Ngo were assigned to a kidnapping, each taking half of their team with them to investigate. Ngo and his squad committed senseless acts of brutality upon their suspect, ultimately landing them in prison due to Cheung’s testimony. In the present day, Ngo and his four confederates are out of prison; a revenge plot is taking shape, and Ngo’s got a few tricks up his sleeve as to who’s going to die and when. An elaborate game of cat-and-mouse ensues, especially since Cheung doesn’t know about Ngo’s involvement, and Ngo knows better than to leave clues or witnesses behind. 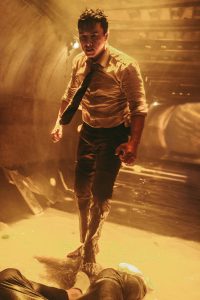 Yen is given the opportunity to imbue Cheung with a sense of measure, honor, loyalty, and love – all traits we’ve seen him give previous roles, but not like this. Here, each decision is weighed with careful appreciation of each situation he faces, and while he’s made to be more reactive than proactive, we see each agonizing choice he mulls over before he makes his sudden next moves, whether facing an opponent one-on-one or an entire shantytown full of refugee gang members. Cheung is a muted, game-face kinda guy who’s only going to let you know what he’s going to do when he’s in the middle of doing it, imparting a certain kind of unknown danger to the character.

Don’t expect to see much of Yen’s typical wushu work here; Cheung’s a straightforward, guns-blazing, go-get-’em kind of cop, leading with his mind instead of his heart. Raging Fire takes its cues from more cerebral police dramas like Michael Mann’s Heat, where depth and characterization take precedence over style or action. We’re hooked instantly with a tragic reversal during a drug roust, and Yen drives Cheung (and the film) forward with solid emotion and sheer will, trying to find the one lead that’ll get him close to whoever’s calling the shots.

Speaking of which, Nicholas Tse – who also had a pleasantly affable role in New Police Story – sheds his pretty-boy image and turns in one of his best performances yet with this dark turn as Ngo, the sneering, aloof, cold-hearted ringleader bent on putting Cheung in a coffin. He gives Ngo his trademark grin to use as a weapon, hurling it like a knife toward Cheung or anyone who gets in his way. His slow, casual drawl reminds one of Danny Chan Kwok-kwan’s Brother Sum in Kung Fu Hustle, but minus the harebrained tomfoolery. No, Ngo is ruthlessly calculating, using his policeman’s skills to defy those chasing him and to easily slip through their clutches. 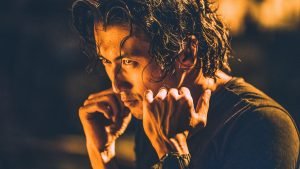 Raging Fire isn’t your usual slice of Hong Kong action cinema. Benny Chan gives us the unexpected, especially with Yen’s name attached, which sets us up to want the usual blowout action set pieces. However, the film carries a hefty amount of brains overpowering its brutality and brawn, making it a total surprise. This farewell to one of Hong Kong’s most talented action directors suits him perfectly, containing more than just bullets and hammer fists. Raging Fire is a reminder that no one gets away clean; all we have are our intentions, and it’s the choices we make as a result of those intentions that show the world who we are. Cheung and Ngo have made their choices; Benny Chan’s final gift is to allow us to sit back and watch as the circle tightens around them both, forcing them to confront the past and each other with every last ounce of pain they’ve got.