Not going to lie: My first reaction to Here After (also known as Faraway Eyes) was one of admiration, and I even had a full review prepared to tell you about it. But the further I got along in the review, the more I realized that I was making excuses for this movie. (And if you want to read that version of the review, drop me a line at eddie @ dcfilmdom[dot]com. It’s not finished, but at least you’ll know what I was thinking.) Here After hangs its hat on stereotypes and male-centric fantasies which treat women like property, not as humans with their own fortunes and destinies that shouldn’t have to be hamstrung by male interference. 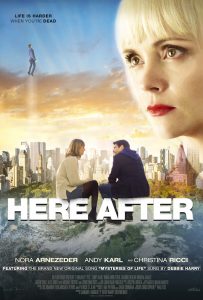 The film takes the stance of an alpha-male, Lothario-esque character who dies as a single man and is forced to find his “soul mate” lest he lose his own soul to the ether and not continue on to the afterlife. Dressed in severe, official-looking garb, afterlife manager Scarlett (Christina Ricci) tells the newly-dead Michael (Andy Karl) that souls move on in pairs, not as single souls, and unless he can find his one true love, his soul will just disappear. That’s a bit much, isn’t it? It’s not like we don’t already have enough pressure from our family, friends, and society telling us to find a husband or a wife and get to having kids, right? And now, this Aristophanes-originated pressure extends to the afterlife? (Aristophanes was of the belief that, originally, humans were two bodies joined and Zeus split them apart to weaken them.)

Thus, Michael has to go out into the world – even asking about the problem that might occur if his soul mate is in another country or continent – as a ghost, fated to walk around New York City until he finds his one true love. The person that completes him. Not for nothin’, but Alanis Morissette once said, “I don’t want to be your ‘other half,’ I believe that one and one make two.” Here After posits that until a person can be comfortable with himself or herself, without façades or pretension, he or she is not capable of truly loving someone. Which, by all means, is correct. But writer/director Harry Greenberger throws Michael into the same kind of thing he probably did while he was alive: going to bars and picking up women.

All around him, souls wander the streets, heads down, incapable of interacting with anyone else. Greenberger also extends this metaphor to show how we, as humans, choose not to even so much as say hello to fellow passersby; we’re too involved in our own worlds to care about anyone else, much less meet a potential mate. True, the biological necessity for any species is to procreate and propagate, but to see Greenberger tell it, the women are cold and calculating while the men are loosey-goosey and fun-loving. 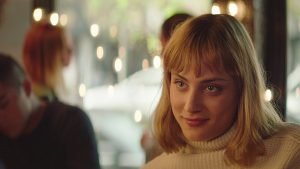 Michael’s no saint; in the opening shots (edited to look like one long take), he stares at the camera and narrates a story about handcuffing an unwilling girl to a bed as a teenager and trying to look cool by unbuttoning her shirt. This alone shows you the view he has of women – as playthings, not humans to be loved and respected. Even his girlfriend in the present day can see right through his bullshit and breaks up with him at an airport while they’re on their way to meet his parents. And after he dies, he meets the one woman he feels comfortable enough with to let his guard down. The trouble is that this woman – Honey Bee (Nora Arnezeder) – is still alive.

For fuck’s sake, she’s not even given a real name. She’s given a playground name, something no right-minded person would ever name their child. Here After is a pure fantasy from the male’s perspective, attempting to let chauvinists off the hook by suddenly making them act right after they’re dead. Does someone need to be dead to do the right thing? Is that what Greenberger is saying? What’s worse is that Honey Bee is being stalked by a fairly oppressive dude named Patrick (Alex Hurt), her former boss who inappropriately asked her out on a date and is now obsessed with her. And even when Patrick starts to take a more psychotic turn, Michael can’t tell Honey Bee the truth about what’s coming for her and why she needs to take action.

This film is abhorrent in its portrayal and exaggeration of “what men want” and how it supersedes treating a woman with decency and honesty. From the opening confessional to the airport breakup to the few women he meets, and even unto Honey Bee – the lovely, unassuming, perfect woman – Michael’s still playing his games. The film’s script wants you to believe otherwise, but were he truly being honest and devoid of all the trappings of humanity, he’d at least have given Honey Bee a better warning after witnessing Patrick commit a despicable act of violence. Instead, he shelters her from the truth and molds the situation to his liking, not to her benefit. That isn’t love; it’s wanting to be the hero of your own story, which is the exact opposite of loving someone.

While there are genuine moments of care and acceptance (Jeannie Berlin’s performance as Michael’s mother in a heart-rending scene is truly a highlight), they’re not enough to overcome the fact that Here After is a male apologist film, passing off selfish acts as whimsical or heroic. The central character only cares about how he looks and what he wants, not about what his paramour wants. And when her life is in danger, he still chooses to be the white knight instead of just straight-up telling her to call a cop or something. Michael hasn’t learned anything; he’s just been put in a position to be something exciting to Honey Bee, then made to be her savior. Here After is far from the romantic farce and meditation upon “soul mates” Greenberger wishes this film could be; instead, it’s another exercise in extending male authority over females, no matter how much Christina Ricci’s character Scarlett and Ricci’s own star power might say in rebuttal.