Posted by Eddie Pasa on August 13, 2021 in Movie Reviews / No Comments

Superficially, CODA is the same kind of “be who you are” coming-of-age story where a kid from the wrong side of the tracks (really, is there a “wrong side of the tracks” these days?) finds a talent that makes them shine, lifting them out of the hell that is high school and bucking their family’s expectations. But the unflinching heart that writer/director Siân Heder gives to CODA – an acronym for “Child Of Deaf Adults” – makes this unique film rise over every clichéd trapping within. Heder layers her screenplay with genuine feeling and soul, giving rise to a loving affinity between the actors which carries over to their performances and enabling CODA to stand tall among the crowded teen film pack with gusto and warmth. 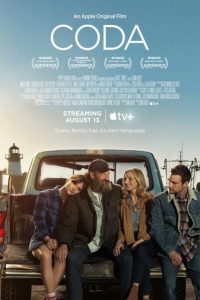 It is this warmth that powers CODA, focusing on a family of four with only one hearing child among them (around 40% of the film’s dialogue is delivered in American Sign Language). High school senior Ruby Rossi (Emilia Jones) has too much on her plate – being an important member of their fishing business (she’s the only one who can hear the boat’s radio and talk with other workers), putting up with the “that girl” mantle at her high school because her family’s different, and deciding what to do with her future. She’s also established as a wonderful singer, possessing the spirit and tones of more polished, studied vocalists. Her family doesn’t know about all this – obviously, they can’t hear her, but they’re also frantically trying to stay out of debt while every day seems to bring more financial hardships (less money for the fish they catch and stricter government fishing laws hamstringing their process).

When she goes for a spot in the school choir – led by the passionately eccentric Bernardo “Mr. V” Villalobos (Eugenio Derbez) – her passion and talent for singing start to take away the space and time she usually devotes to the family business. It’s going to come down to a choice between the two, and the bulk of Ruby’s journey lies in where she fits into her singing and fishing worlds and the choice she has to make between the two. As I said, the film’s stock and trade is the kind of thing we’re all used to by now, to the point where I was guessing at certain lines ahead of my screening copy, and I got them right 99% of the time. 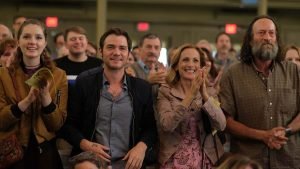 You know what? Screw its cliches. This unbridled gem of a teen comedy earns our smiles and hearts with breezy ease thanks to Heder’s punchy, uplifting, and downright hilarious screenplay and the actors who made it their mission to inject every frame with humanity, grace, and love. Heder has a knack for capturing each actor with thrilling honesty, whether it’s Ruby making angst-ridden decisions or crushing on choir member Miles (Ferdia Walsh-Peelo), her mother Jackie (Marlee Matlin) and father Frank (Troy Kotsur) alternating between being goofy kooks and stern parents, her brother Leo (Daniel Durant) demanding that Ruby not waste her talent, or Mr. V being impishly peeved at Ruby’s late entrances and initial reluctance to sing the way he wants.

CODA also mines natural, unforced humor from Ruby’s circumstance. Frank and Jackie – a grizzled fisherman and a former model – have made their home with light and laughter, but they’re also not immune from committing certain social faux pas around the hearing, which range from dinner table flatulence to being diagnosed with jock itch (the sensations of which Ruby has to embarrassedly translate – in her own way) to defying the doctor’s resulting orders in a screamingly funny scene where Ruby’s practicing a duet with Miles. In the lighter instances, you can see a practiced, mortified love that Ruby uses to deal with these hiccups. There’s also a comfort with which the Rossi family operates that emanates from the screen every time they’re together. 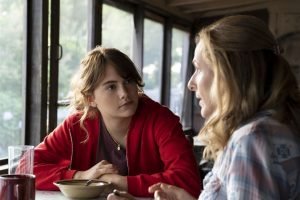 At times, it’s often hard to believe that these are just actors playing roles; there is a true togetherness at work here which transcends similar teen movie parent/child dynamics. This is a true breakout role for Emilia Jones, who peppers her character with wonderful teenagerness (if that’s a word, which it probably isn’t). Having to be the girl who smells like fish among her peers, fulfilling her role as the only one who can speak for her family, finding her first love, and learning her strength at the hands of her peculiar choirmaster (Eugenio Derbez ought to be thrown in jail for joyously stealing every scene he’s in) – Jones has to carry all of this weight, and she does it with astounding natural talent. Not once does she overplay a single breath or gesture; she is in perfect control, and she is many times over the anchor this movie deserves.

Also providing a standout turn is Troy Kotsur, whose performance as the Rossi patriarch yields memorable moment after memorable moment. Frank knows he’s caught between a rock and a hard place with his business, and Ruby’s ever-increasing absence from the boat doesn’t add any pleasure to the mix. But there’s a softness, awareness, and acceptance Kotsur gifts to Frank that make him a magnetic, one-of-a-kind figure. He gets that life isn’t simple, that the choices the family has to make as a whole and as separate members might not be to his liking, but Kotsur makes sure Frank has a wisdom behind his eyes that gives way to understanding – an understanding that he probably wasn’t afforded by others, but one that he makes sure that everyone he meets is given, especially his family. 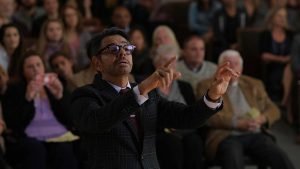 And that’s what CODA is about: understanding. It’s a wave repeatedly building and crashing throughout the film. Frank’s fishing business, Ruby’s singing, her burgeoning relationship with Miles, her tutelage from Mr. V – there is no moving forward without understanding. Everyone in the film seems to want – or is given a reason – to break out of inertia, but it’s in taking our steps with support that we find the strength to fly. CODA is a heartfelt, marvelously engaging film filled with authentic, solid performances, reaching out to us and beckoning us to walk alongside the Rossi family as they find their way forward together.