Posted by Eddie Pasa on August 26, 2021 in Movie Reviews / No Comments

The best of art makes us uncomfortable, revealing our blind spots and forcing us to look at things differently, as both individuals and as a society. American history is rife with racial injustice, and there is no shortage of evidence that plainly demonstrates that we haven’t risen far above our unsavory past. In 1992, Bernard Rose adapted Clive Barker’s “The Forbidden” into a seminal film called Candyman, which featured the vengeful ghost of Daniel Robitaille (Tony Todd), a Black man lynched in 1890 due to being in a love relationship with a white woman. Through its own terms and the overt language and delivery typical of 1990’s films, Candyman was a bevy of things at once: a slasher film, a Gothic horror story, an examination of the veracity of urban legends, and a hard look at racial differences. 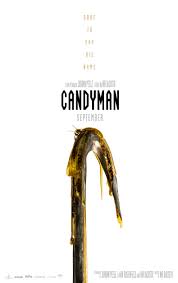 Two sequels followed to diminishing returns, opting for more of the slasher angle than its social commentary roots. Director/co-writer Nia DaCosta takes her vision of Candyman back to the original, eschewing the sequels and starting from scratch with a new legend accompanied by damning statements on where we are today. Akin to David Gordon Green’s Halloween, none of the stories, plots, or characters from the sequels get in the way of tying straight to the original film; seen as a double-feature (which is how I digested both films), Rose’s Candyman dovetails disturbingly well into DaCosta’s, which takes place in the here and now, filmed seven years after the founding of the Black Lives Matter movement and gaining nasty relevance in the two years since DaCosta’s cameras first rolled. (This film was originally slated for a June 12, 2020 release date, which tragically turned out to be a mere 18 days after the murder of George Floyd.)

The film unsettles right from the reversed opening logos, displayed to make the iconic Universal globe, Metro-Goldwyn-Mayer’s Leo the Lion, and Monkeypaw Productions’ disembodied hand appear backward over a distorted recording of Sammy Davis Jr.’s “The Candy Man.” And as the opening credits roll, we’re treated to another reversal – this time, from Rose’s original, where the credits played over straight downward-facing shots of Chicago’s highways. Here, DaCosta has cinematographer John Gulesarian point the camera skyward, with Chicago’s famed buildings in stark relief against low-hanging clouds which make each edifice ethereally disappear, showing these representations of wealth and power from the point of view of people who have no chance of getting through the front doors of any of them. 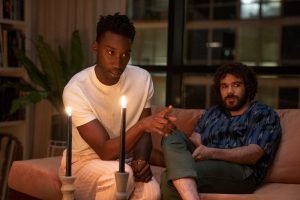 The last of Chicago’s notorious Cabrini-Green housing projects (which were almost a character in and of themselves in the 1992 film) were razed in 2011, making way for a more upwardly mobile, gentrified populace. Gone are the gang-controlled apartment towers and any trace of poverty; DaCosta uses this location and its history to the film’s advantage, exposing the chasm resulting from the haves moving in on the have-nots through our introduction to visual artist Anthony (Yahya Abdul-Mateen II), currently suffering from a creative block. Over glasses of wine with friends in a stunning loft apartment built on the former Cabrini-Green grounds, he shares the sordid history of the neighborhood and the changes made to make people feel “safer.” (Read: White people in the rich neighborhoods on either side of Cabrini-Green didn’t want to see the projects anymore.)

It’s also in this discussion that we learn about the legend of Candyman, a “Bloody Mary”-esque spook story held over from the Cabrini-Green days. Say “Candyman” five times in a mirror, and he appears behind you and tears you open with his meathook from groin to gullet. Upon hearing this, Anthony’s interest is piqued, and the Candyman story unleashes a torrent of creativity, his paintbrush turning out images of violence and pain. But his work also unleashes Candyman (Michael Hargrove) himself, bloodily murdering Anthony’s agent and the agent’s girlfriend at an art installation where Anthony’s Candyman-inspired art is being showcased. 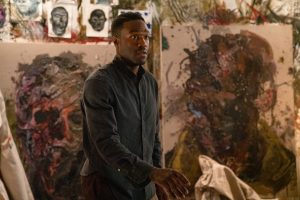 DaCosta’s Candyman is less about the graphic violence perpetrated by Candyman – or the person we thought we knew to be Candyman – and more about the history of his violence and his appearances throughout decades past. The more Anthony paints, the deeper into this history he goes; he paints these faces of agonized Black men which seem to pop into his head, but in his due diligence, he finds unsettling story after unsettling story, all based on historical fact. Thinly-veiled references to Emmett Till and other Black men unjustly lynched and killed are used to highlight how often Black men are made victims of senseless violence, giving rise to what seems to be an unstoppable cycle of death and vengeance.

Fans of the original will no doubt understand the link Anthony has to Candyman as soon as he’s introduced, providing yet another cyclical layer to DaCosta, Win Rosenfeld, and Jordan Peele’s script. DaCosta’s Candyman isn’t about “evil white men”; it’s more about how all of us – regardless of race – are still stuck in patterns that haven’t evolved. The used versus the users. The poor and rich. Those who appreciate the work but not the hands doing the work. The biased in power versus those they keep underfoot. DaCosta, Rosenfeld, and Peele widen and deepen the expanse of themes touched on in the original through each step Anthony takes toward fully understanding what’s happening to him. 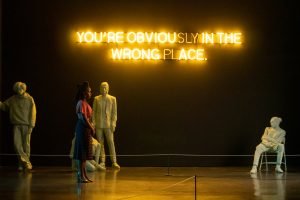 The film also changes the perspective of its protagonist. A white woman researching a Black legend has now become a Black man being changed by the legend. Both were/are being used to keep the story alive and to keep the Candyman’s name on people’s lips. A fairly well-known aphorism tells us you’re only dead when the last person in the world who knows your name dies; through this seemingly unending cycle of violence, it’s sadly assured the Candyman’s name will survive well beyond when it should be laid to rest. Anthony’s paintings are only a part of the role he plays in Candyman’s survival, and it’s only when former Cabrini-Green resident William Burke (Colman Domingo) enters the picture that Anthony truly starts to understand the breadth of Candyman’s story and influence.

DaCosta’s Candyman is a true horror story, not just because of its slasher film trappings (there are a few scenes which seem dropped in to maintain the body count), but because of its telling reflection of our current society. The film’s tagline, “Dare to say his name” – itself a riff on the 1992 film’s tagline – evokes recent calls to remember the lives brutally ended by prejudiced violence. Candyman’s appearances in mirrors (or other reflective surfaces) isn’t just a Bloody Mary allusion; it’s us facing the horror within ourselves. Even if you take away the supernatural, this Candyman is designed to disturb, wielding its story and visuals like the titular character’s bloody meathook, digging into our skins and making us look at what’s inside.