Posted by Eddie Pasa on July 9, 2021 in Movie Reviews / No Comments

Too Late reminds me of several things all at once. The first is a scathing, profanity-laced tirade W. Axl Rose fires off about Warren Beatty before Guns N’ Roses launches into “Double Talkin’ Jive” from their 1992 pay-per-view concert in Paris. The second is Swimming With Sharks, a 1994 film about the horrible things a ruthless film executive wreaks upon his harried assistant. The third thing is a story (or was it a scene from a movie?) about a producer or a promoter angrily insisting that he knows “what plays and what doesn’t play” in his market, and he guarantees that the people in front of him won’t play. The fourth is any vampire, monster, or serial killer film where the villain uses someone to bring them new victims – Beni (Kevin J. O’Connor) from 1999’s The Mummy is the specific example I have in mind. 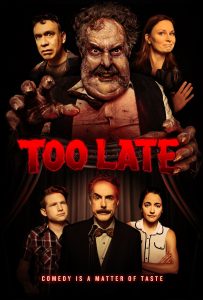 All of these have one thing in common: the young getting used by the old until the young have their dreams mercilessly curb-stomped, their lives and fresh ideas crushed under the wheels of an industry more interested in self-preservation than making new roads for the up-and-coming. And when the young finally have their chance, it’s usually too late for them because even newer talent has entered the arena, leaving no room for what they have to offer and, well, being too late to do anything about it. This is how the aptly-named Too Late rides, with put-upon assistant Violet (Alyssa Limperis) running aging comic Bob Devore’s (Ron Lynch) late night stand-up comedy showcase (the titular “Too Late”) in the hopes that she might be able to have her own time on the mic, once promised to her a long time ago.

Needless to say, it’s a promise that hasn’t been fulfilled; Bob seems to let everyone except her have a turn in the spotlight. Bob not only demands that Violet be at his beck and call, but he also tasks her with bringing him new talent to feed upon – literally. Hey, “Devore” is his last name, so when we see him in monster makeup scarfing human bodies whole (the film’s low budget prevents us from seeing anything too terrible), we’re not surprised. But people have a habit of disappearing after their time on “Too Late,” and the peculiar thing is that no one really notices. It speaks to the disposable, dehumanizing Hollywood undercurrent we hear about from people who took their shot and missed or quit the scene altogether because there was no way forward.

Ron Lynch gives Bob a “this is the way it’s always been done, and it’s going to keep going” kind of air (especially as it’s intimated that he’s been around a long time), whether in human form or as the bloated monster. He doesn’t growl and his voice doesn’t change or get demonic, which becomes a source of mirth in and of itself. There’s no real difference between his two forms; Bob is an ugly person either way, and Lynch makes him ooze with a seething patriarchal intensity which smothers Violet bit by agonizing bit. He steamrollers her slowly, suffocating her and using her devotion to him and his work (both on stage and when it’s chow time) as his advantage.

Opposite Bob, Alyssa Limperis’ Violet is an energetic go-getter, capable of juggling her boss’ many wants with her own world, one which sees her running a comedy open mic at a coffee shop. There’s a sadness Limperis layers as an undertone in any of her interactions, whether with Bob, his guests, her friends, and even a potential love interest in Jimmy (Will Weldon), a genuinely nice guy who slays both Alyssa and his audiences with his genteel wit. She works hard at whatever she does, getting nothing but grief in return; Bob doesn’t treat her as a person, just something that’s under his boot that he enjoys making wriggle. Lamperis makes it hard to endure watching her constantly passed over and mistreated, which is meant as a compliment; she’s natural, at home with her character and never exaggerating her very humanistic reactions.

A scene that’s especially hard to stomach occurs between Violet and overly-aggressive comic hopeful Dax (Billy Breed), where she’s badgered and physically endangered while this pathetic excuse for a man makes a play for a spot on “Too Late.” Quite frankly, this was more disgusting to watch than seeing Bob snacking; the near-rapist advance Dax makes on Violet, using masculinity and size as his weapon, and Violet’s terrified and nauseatingly realistic defense mechanism are sickening. The film’s horror lies in what we do to each other for a leg up, whether it’s violating someone’s person and self-worth, knowingly sending someone into danger, hurting someone out of sheer spite, and using one’s power with cruel, malicious intent.

Writer Tom Becker pushes a lot of buttons in Too Late, aiming his cocked-and-loaded pen at white male-dominated structures built expressly to prohibit women, innovation, and progress from gaining any traction. Bob needs Violet under his thumb and will do anything to keep it that way. He has Violet cull the herd for his feasts, but nobody’s calling the police or following up after their friends or loved ones go missing at his theater, a curious jab at the lack of consequences for powerful men. Those who don’t know him only see a comedic legend, a man to beg for table scraps. Violet’s guilty of this, too – she’s aided and abetted his murderous appetite, sometimes for her own ends. But after seeing Violet diverted by Jimmy, what does Bob do? He invites Jimmy to “Too Late,” intent on maintaining his sole ownership of Violet’s attention.

Too Late uses horror movie trappings to lampshade its commentary on the chew-‘em-up-and-spit-‘em-out nature of the entertainment industry and humanity in general. Even if Bob wasn’t some supernatural ghoul, the point would still remain the same; there are people in our world who behave like him, and they somehow get to the top and use every measure to stay there. Becker didn’t need to insert the supernatural angle of Bob’s existence, but it’s definitely funnier his way. As a counterpoint to the constant turmoil in Violet’s life, we get to see bits of excellent stand-up performances from the likes of Mary Lynn Rajskub, Paul Danke, and Megan Koester, further cementing the vast chasm between where Violet is and where she wants to be.

Even the last cut to black before the credits is darkly and hilariously funny, a hell of a final comedic punch first-time director D.W. Thomas times perfectly. He makes us want Violet to escape a life of doing and enduring horrible things, and he spins Too Late with a keen balance between satire and real-world malfeasance that hits close to home in uncomfortable ways. Scenes where Violet gets to be herself are few and far between, but Thomas also makes sure to give us time to share in Violet’s temporary happiness, allowing the unexpected sweetness to bubble and give us hope for her. Too Late’s metaphorical take on the cutthroat Hollywood machine might carry a bit of a depressing quality about it due to Violet’s struggles and the statement Becker makes about the old guard and its hold on the business, but Alyssa Limperis and her hero Violet guide us through the film’s inherent ickiness (both figurative and literal) with earnest strength.