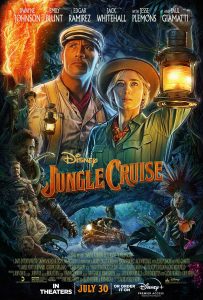 Right away, Jungle Cruise throws you off with an altered Magic Kingdom logo underscored with a repeated E-G-B-E-B-G note sequence which suddenly becomes all too familiar once more instrumentation is added. Then you find yourself wondering, “What the hell is Metallica’s ‘Nothing Else Matters’ doing as the musical score of a Disney flick?!” Everything about Jungle Cruise is aimed at discombobulation and disorientation, from the acting to the script to the editing to the story to the score to the editing to the flashy cinematography and the editing and ridiculous CGI and the editing. Oh, and did I mention the editing? It might not be as bad as the 13 cuts for one fence-jump in Taken, but it’s fairly close.

All of this superficial excess drives this port of a Disney theme park ride over to the cinemas, à la Pirates of the Caribbean: The Curse of the Black Pearl, a film loads more exciting and lighter on the computer fakery. It also had a compelling story to tell and excellent work on both sides of the camera to help pull it off. Jungle Cruise’s story, plot, and characters are straight out of the “We must hire a guide/captain to take us where we want” kind of films (The African Queen comes easily to mind), any number of Saturday afternoon movie serials, and the latter-day movies which paid homage to them (the Indiana Jones films; older Disney adventure movies like The Last Flight of Noah’s Ark and Swiss Family Robinson, among others; even Stephen Sommers’ The Mummy from 1999). And there’s more than a large debt owed to the aforementioned Pirates of the Caribbean, from which this film seems to take almost all its cues. 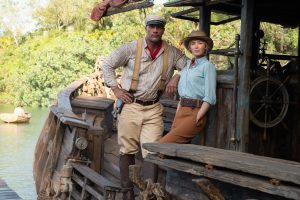 Jungle Cruise rides strictly on the presence of its charismatic and deft leads, the ever-watchable Dwayne Johnson and the feisty Emily Blunt. They and their characters function not just as plot-movers, but essentially this film’s cheerleaders and rope-pullers. You can see the exertion on their faces as they will this movie to entertain from beginning to end, and their labors are not in vain; Jungle Cruise does the job it has been sent to do, largely thanks to them. But because of editor Joel Negron’s constant hyper-fast cutting, it’s a sufferingly hard task to truly appreciate and enjoy the work Blunt and Johnson do to keep us in the game. Emotions and emotional connections aren’t given enough time to seat themselves in the viewer and grow because our focal points are constantly being shifted, and it’s a damnable cheat code for trying to keep the film flying high. Well, anything named “cruise” might be taken to mean slow, so I guess they’re trying to overcompensate.

Regardless, our film takes us down the mighty Amazon in search of the mythical Tree of Life, its petals said to grant the cure for any illness or affliction. Dr. Lily Houghton (Blunt) and her put-upon brother McGregor (Jack Whitehall) wind up in Captain Frank Wolff’s (Johnson) care, only after Frank’s promised a considerable amount of money to take them to the Tree of Life. But Lily and Frank’s first encounter foretells the kind of trip it’s going to be, with Frank pulling scam after scam on her to try to dissuade her from going any further. Not only that, zee Germanz (y’all’ve seen Guy Ritchie’s Snatch, right?) are after the Tree as well, with the reasoning that the Tree will provide them immortality – and thus, infinite power. 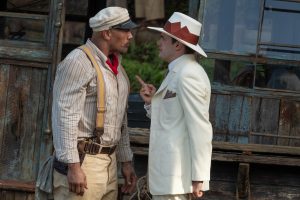 Without a doubt, there are backstories and untold histories that come into play sooner or later, but this attempt at emotional depth is just shoveled into the story as if we needed a breather from all the action. Nope – in fact, this shoehorning of “you’ve GOT to care about us now!” slows the movie down to an interminable crawl after laying on one quick action sequence after another. It’s not done cleverly or with any sort of layering or nuance; it’s just there, the movie daring us to take it or leave it. Quite honestly, it might’ve been better left instead of taken, due to the fact that these moments often come well after the point where we’re supposed to decide if we care or not. One such emotional appeal almost kills the movie and stops it dead in its tracks, because we’ve heard almost the exact thing in another Disney movie; to hear it repeated here is almost an insult, as if Disney didn’t think we’d notice. But we do, and there’s nothing we can do but hope for a good ending for all involved.

Amid all of this, director Jaume Collet-Serra pushes the excitement levels up and makes a film that, at the very least, entertains and tries to earn our gazes. Jogging from set piece to set piece with little drops of character definition in between, Jungle Cruise more than holds our attention and tries to have fun with its trappings. Dubious CGI notwithstanding (at one point, you can see the gaps between the computer-generated backgrounds, the blue screen, and the actors’ hair), we’re grounded by decent characterizations, a fairly thrilling quest for the Tree of Life, ostentatious dad humor, and a naff, easily-digestible adventure that doesn’t stray into uncomfortable places. 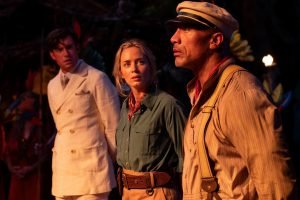 But that’s the thing; it doesn’t stretch to hit its marks. Its machinations are obvious, the script is a dead rip-off of many recognizable (and recent) films, and it leaves you feeling like you’ve just watched another Hollywood retread. The only saving graces of this film are Emily Blunt and Dwayne Johnson, who never give less than 100% to any film they’ve chosen, and their combined efforts pull Jungle Cruise away from being lackluster, as they genuinely seem to be enjoying each other and what they’re doing. Because of these two, Jungle Cruise is a watchable Saturday afternoon flick that makes its home with its large-screen visuals and an eager cast. Its constant bombast may overload the film and fall flat, but the gutsiness of its leads gives the film the power it needs to bring it over the finish line.