Indie horror films usually fall into two categories. The first is in being a smallish horror film trying to hold its own against the big boys, and these often prove to be more fun than their studio-funded brethren. The second lies in a deeply personal realm, where things make more sense to the director and writer (often the same person) than they do to the audience. Woe falls squarely into the latter, examining the implications of failing mental health and the cycle it perpetuates. 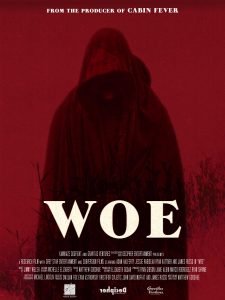 Writer/director Matthew Goodhue’s low-key, low-volume psychological horror tone poem (yeesh, that’s a mouthful) envelopes us in silence and solitude as we follow two siblings dealing with the aftermath of their father’s suicide. Much is made of the aftereffects Charlie’s (Adam Halferty) suffering, having to refurbish his father’s house while living in it; Betty (Jessie Rabideau) only holds onto a few scant possessions, wanting to move on and settle with life on her own terms.

That’s about as much as makes sense with Woe. The rest is watching Charlie fall deeper into an abyss that not only looks at him but ensnares him in its grip with no intention of ever giving him back to the light. Signs are abundant throughout, even from the opening scene where Charlie carries something in a trash bag to his back yard, kisses it, then proceeds to bury it. This sequence – explained later through audience proxy and Betty’s fiancé Benjamin (Ryan Kattner) – defines this film as Charlie is forced to push away any kind of solace or happiness.

We don’t exactly know what kind of trip this movie is, owing to Goodhue’s sparse dialogue and extremely limited interactions. This story is told strictly through nuance and inference, and Goodhue doesn’t care if it drives the audience crazy with its utter lack of straightforward storytelling. We’re caught completely in medias res, where the hints of the past stay as hints; the present is the only thing we know, and there’s very little of it enabling us to seat ourselves comfortably with the film.

But Goodhue doesn’t want us comfortable. He wants us as bewildered as Benjamin is, looking from without at a family in emotional ruin. There’s only so much explained by Charlie’s actions and the mysterious appearance of his Uncle Pete (James Russo) in a backwoods cabin, warning Charlie that he doesn’t know what he’s doing or what’s coming for him. Pete demands to know if Charlie’s been followed, perhaps by the looming black-robed specter that seems to haunt Charlie – and, at one point, Betty – throughout Charlie’s father’s house. We never see who or what’s under the robe, leaving this wraith as a symbol of oncoming madness. Likewise, there are no explanations for the red-eyed creatures seen in Charlie and Betty’s father’s drawings and in the woods near Uncle Pete’s house; they’re just there to proclaim themselves as something lying in wait.

That’s what the real horror of Woe is – the undefinable and unknowable heading straight for its victim. It might be days, months, or years before what happened to Charlie and Betty’s father happens to them, too. In this, Woe is almost a companion piece to 2020’s undiscovered gem Relic, which dealt with similar heartbreaking familial themes by putting them into an easily understood horror context. However, Woe is far from easily understood; some of it is downright maddening.

Were it not for Benjamin’s intrusions, we wouldn’t know anything. He is truly the linchpin character in Woe, translating Betty and Charlie’s actions loosely enough to avoid being simply a play-by-play commentator, but still remaining on the outside and just as confused as we are. We don’t know the full extent of their father’s instability (excepting, of course, his tragic end), but we see Charlie’s got more of it than Betty. Is it a result of him being in the place where his father died? Or is it genetic, passed on through the generations and chillingly hinted at in the film’s closing line?

Woe is the kind of film which comes off as thought-provoking because it doesn’t give us everything. And it is highly effective in this endeavor, as I’m still wondering about each montage-edited sequence showing hints of what Charlie’s up to or Betty’s curious behavior. It’s not a film that lays bare its intentions and methods, requiring one to truly mull over what’s been presented to them. Goodhue deliberately underplays this film to make us ask hard questions about its raison d’être and surprises us with the answers we find on our own. Those answers may not be the ready and willing ones we’re used to seeking; instead, they’re spikes of reality staring us in the face while we’re looking hard for the easy way out. And in that, Woe is a masterful success.

Not rated by the MPA (contains some language, violence, and disturbing images – equivalent to a light R). Running time: 84 minutes. Released by Gravitas Ventures.
Posted in Movie Reviews