I’m going to put it as bluntly as I can: The Hitman’s Wife’s Bodyguard is all show, little go. But what show there is can be at least defined as “entertaining” and “it does its job,” if you were a fan of the first film. (I was.) There’s not much to either of these movies; you have Ryan Reynolds playing straight man to Samuel L. Jackson’s… Samuel L. Jackson. If that’s enough to get your butt in the seats, then God bless you – you’ll have a terrific time watching these two mix it up again with copious amounts of “Motherf**kers” thrown in for good measure. 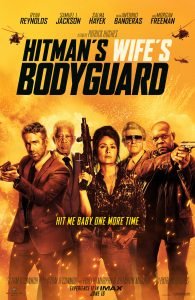 This sequel is here merely to take the piss out of everything and everyone, including the legendary Morgan Freeman, who even joins in poking fun at himself. It’s almost parody-like in its nature, except without the “Weird Al” Yankovic kind of self-deprecating charm. Oh, no – this one just keeps throwing action movie staples, comedy hijinks, and callbacks at the wall to see what sticks, and it’s about 50/50 as far as its effectiveness. No one and nothing is serious in this film, which is where the film loses its ground and never regains it.

Sure, we’re all fans of Reynolds’ deft, feather-like comedy touch and surprising skills, much as we’re always up for watching Jackson do his thing. This time around, they expand the Sonia character set up in only a handful of scenes in the original by Salma Hayek, whose limited screen time gave such dastardly comedic punch and zing to The Hitman’s Bodyguard. Here, she’s fully fleshed out into a lead, and it’s always nice seeing Hayek alternate between her fast-talking mouthfuls of dialogue and hysterically funny over-enunciations, as if there was a period or exclamation mark after every word. 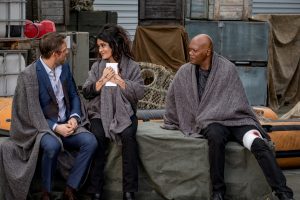 But that was part of the original’s charm. We only got to see her in fits and starts, thus making her scenes – however crass and backhanded they were – spunky and surprising, leaving you wondering exactly who this woman was that could talk back to law enforcement officials with such spite while finding the time to make sure her cellmate knew exactly where she stood. (Literally, in one scene.) By bombarding us throughout the whole movie, the shtick grows tiresome, but at least a few wrinkles are written in to try to keep things fresh, like how baby-crazy she is and showing us her softer side. Which really isn’t that soft, when you think about it.

Another facet the original holds over its spawn is a decent villain. There’s no doubt that Antonio Banderas is a hoot, especially as Galgo in The Expendables 3, another film by Hitman’s Bodyguard series director Patrick Hughes. Here, he’s utterly wasted as Greek crime boss Aristotle Papadopoulos, whose goal is destroying the European Union by corrupting its data flow. Honestly, both he and this plot point almost don’t even register as attention-worthy due to screenwriters Tom O’Connor, Brandon Murphy, and Phillip Murphy not giving him any time to develop the character and his motives. Is he a socialite? Is he head of a Mafia family? Who the hell knows or cares? All we know is that he’s got some kind of tie to Sonia that makes him prevent his team from exterminating her, her husband Darius Kincaid (Jackson), and Michael Bryce (Reynolds) when they foil his plan midway through the film. 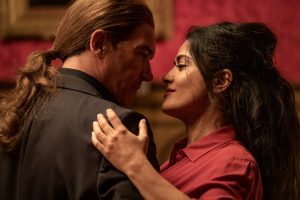 Michael’s another story altogether. Because of his disillusionment stemming from being stripped of his Triple-A rating, he’s in therapy and told to not do any bodyguarding – meaning no weapons of any kind. And just when he’s settled in on his long-deserved vacation, that’s when Sonia raises all sorts of hell trying to get her kidnapped husband back, and the only person he asked to help was Michael. (At least that’s what she says.) For the majority of the film, we get to see Michael worm his way around using guns and knives, and his ingenuity as written is fairly impressive.

When it comes to Darius, ain’t a damn thing changed. He’s still the devil-may-care, kill-‘em-all-and-who-cares-if-they’re-sorted-out assassin whose only soft spot just hired the last person he wanted to be involved with his rescue. His liberation comes at a price, as his captors – now murdered – were supposed to be the key to stopping Aristotle, but now all three of them have to play Interpol agent Bobby O’Neill’s (Frank Grillo) game by posing as weapons buyers. You know that this three-person barrel of monkeys has exactly ZERO chance of success, especially given that Darius, Sonia, and Michael can’t seem to work together without pissing each other off. 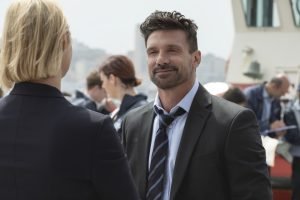 Plot, story, probability of success – who gives one ripe sh*t? It’s all just a means to getting back in the saddle with Darius and Michael, now given more time to air their grievances over and over and over again until they find some kind of common ground. Saying The Hitman’s Wife’s Bodyguard is “more of the same” is kind of an insult to the original film, which actually cared about the story it was telling. Honestly, this is the Ocean’s Twelve of the Hitman’s Bodyguard series, where the actors are just here to have fun and get a little bit of it on us.

The action flits all over Italy, with Terry Stacey’s loving cinematography capturing countrysides and port cities with artful mastery. Of course, what’s crammed into those gorgeous vistas is exactly the opposite – kinetically cut chase scenes and gobs of forced humor. It’s this kind of balance that makes you rethink what “balance” really is. You’ve got a hell of a cast in this movie, but all of them feel kind of along for the ride and made to do things the writers and directors think the audiences would like. So yes, in regard to fanservice and just trying to put on a show, The Hitman’s Wife’s Bodyguard succeeds, but one can’t help but think it’s a little bit of a missed opportunity to perhaps do something more. But it doesn’t want to be more; it just wants to be. And that’s one admirable thing about it.