Extinction-level event, apocalypse-style films usually go one of two ways. The first is the extent to which the Mad Max films go, where everyone’s reduced to the barest minimum in a kill-or-be-killed setting. The second is a more measured approach, possibly where life would stand before the Mad Max kinda thing happens. Where everyone’s just trying to figure things out and get everyone to safety before the guns start blazing. This is where we find School’s Out Forever, a film centering on a young troublemaker who joins in the fight to keep his schoolmates from harm. It’s not a Die Hard, every-man-for-himself scenario; it’s just kids trying to stay alive away from the general population. 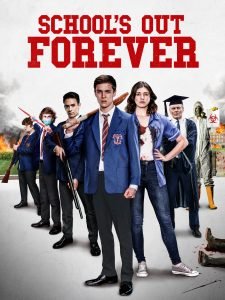 This take on “a giant pandemic wipes out a significant amount of the world” seems a little more down-to-earth, a little more measured than the various action and horror films we’ve seen in the recent past. Here, we have a pandemic which kills everyone with a blood type other than O-negative. The dead aren’t turned into zombies or anything like that; they die and stay dead. Director/co-writer Oliver Milburn frames his story that way, relying on visuals reserved for George A. Romero’s Dawn of the Dead (and Zack Snyder’s remake), but the trick of it is that the horror comes from a much different place.

It comes from the power structures we want and so readily accept amid chaos. We see it every time there’s a national crisis; we’re looking to see who’s in charge and who’s going to lead us out of the hole we’re in. And when those leaders turn out to be less than the guiding lights we want, that’s when the conflict begins and the guns start talking. More often than not, we’re centered with a character walking the fine line between the good and the “it’s a license to ill!” crowd, and much is made of that character not taking a false step into either territory. 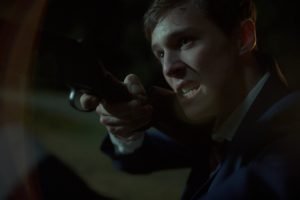 For School’s Out Forever, this character is Lee Keegan, played with youthful abandon by Oscar Kennedy. Expelled for making a false video and for having illegal contraband in his backpack (it isn’t his, but he takes the fall for it, alluding to how much he prizes his friends), Lee is told to return to his posh boarding school after his father dies, reuniting with his best friend Mac (Liam Lau Fernandez) and the surviving students and staff of St. Mark’s. For the most part, people are behaving exactly how you’d expect – foraging for supplies and staying out of danger – until someone comes into the school looking for refuge from a two-person team led by Claire Baker (Freya Parks), both of whom the schoolboys neutralize to varying extents. (There’s a graphic neck-breaking that made me shout out in surprise. That’s saying something.)

The rest of the film plays out a little like John Carpenter’s Assault on Precinct 13, itself a thinly-veiled remake of Rio Bravo, what with Mac physically and irreparably damaging Claire, thus necessitating holding her in the school. However, Milburn and co-writer Scott K. Andrews throw enough curveballs into the proceedings and emerge with something that feels fresh and vital. Milburn and cinematographer Thomas Hole ensure that we feel the claustrophobic expanse (if you can dig it) of the boarding school while maintaining a firm grip on spatial relations, using each location to define each different conflicts between the school’s inhabitants and the outside forces, both of whom who only want what’s theirs. 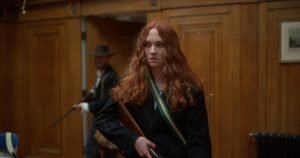 And that’s the thing that drives School’s Out Forever – people just want what belongs to them. The school children don’t want anything except not to be bothered, and the people attacking the school only want their people who’ve gone missing. Only they’re not missing, and the schoolboys deny they have any knowledge of their whereabouts. But when push comes to shove, and when shove comes to shots fired and bodies hitting the floor, we start to see personalities and the real danger from within start to emerge.

This isn’t your typical horror film with clear victors and villains. School’s Out Forever blurs the line between the aggressors and the aggrieved, and there isn’t a clear division between them. Our basic human nature to defend and protect is put to the test here, as Claire’s mother Georgina (Samantha Bond) is just looking for her daughter. Knowing full well they can’t simply give Claire up to Georgina, the schoolboys create a standoff led by Mac, who’s been tilted by killing Claire’s partner. 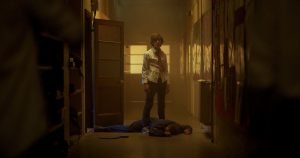 School’s Out Forever goes into uncomfortable places, between Mac going fully unhinged and Georgina’s faction drawing down on the youngsters defending their ground. All the while, Lee’s the one trying to keep both the schoolboys and Claire’s side from killing each other, and it isn’t looking good. The hunt for a peaceable solution is fast running out of time, and it’s not like anyone’s backing down. Mac’s slide into pure psychosis has hit the point where he sees the remaining two authority figures in the school as obstacles to his survival, and Georgina’s going to lead her people in ready to take the school by force.

It’s a pessimistic and entirely realistic look at how we treat each other in the worst of circumstances, when people are pushed to their limits and the only way out is to solve problems by violence. School’s Out Forever sneaks up as a low-level gem, full of a balance of the unexpected and predictable lengths we turn to when we’re faced with insurmountable odds. It’s not just tension and suspense; there are some spots of cheeky humor which keep it from being completely dark and brooding. There’s more at work here than just a “hold your ground” kind of film; School’s Out Forever examines humanity pushed to its breaking point, setting its sights on the mental and physical toll of disaster and its aftermath.

Not Rated by the MPA (contains considerable violence and some language, equivalent to R). Running time: 105 minutes. Released by Central City Media and Rebellion Entertainment.
Posted in Movie Reviews