Here we go again… the good ol’ “make ’em afraid, then watch ’em squirm” Disney movie. From The Little Mermaid onward (and kind of reversed with the original Pete’s Dragon), this theme is a mainstay in children’s programming and films. Yes, it’s a metaphor for growing up and into the world around us, but isn’t it a little tiresome by now? Robert Heinlein’s 1951 novel Stranger in a Strange Land has paved the way for numerous stories in which the central character goes into a society they’ve only seen from afar, but they happen to have their own special set of circumstances holding them back from fully integrating. 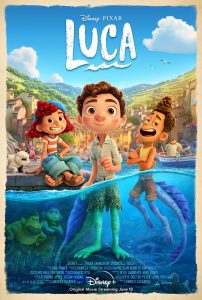 In true Disney fashion, Luca celebrates this trope with energy and gusto, traits which almost cover up the fact that this is a rehash of Wreck-It Ralph. Here, we have the shunned and maligned heroes (two young male sea creatures), the town that thinks they’re monsters and must be harpooned, the fight that dissolves a friendship, and the Herculean task that causes the heroes to grow as people, reunites the friends, and makes them proud to be who they are. As for the townspeople, you probably already know how it’s going to be for them by the end. Whoa… reading it broken down like that, Luca is almost as predictable as an Adam Sandler movie.

Yeah, cynical, huh? To me, Luca is about the fear of the unknown on all sides. Sea creature Luca (Jacob Tremblay) is just taking his first steps into a potentially dangerous world his parents have warned him against. Fellow non-human and fly-by-night thief Alberto (Jack Dylan Grazer) is afraid of being alone, although he tries to hide it well. Luca’s parents (Jim Gaffigan and Maya Rudolph, the latter playing the harried mother-figure again) are afraid that they’ll lose their son to the world. The townspeople are afraid of these sea creatures; the only one seemingly bothering any of the humans is Alberto, who goes on nighttime jaunts to steal little things from boats. Villainous cad Ercole (Saverio Raimondo) is afraid of losing a triathlon and the admiration – however fake – of his friends and the town. 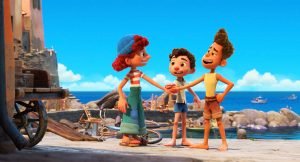 The only person who doesn’t seem to be afraid of anything is the open-minded, inquisitive, extremely smart Giulia (Emma Berman), who accepts “runaways” Luca and Alberto as friends and invites them (as they convert to human form out of water) to stay in her treehouse. Wide-eyed Luca takes everything the more worldly Alberto says as gospel, but Alberto knows just about as much about life above sea level as Luca does; he’s just been up there a little longer. Both of them need each other as friends and as co-explorers, and when Giulia gets in the way… well, we all know how it is when a third party intervenes between best friends. This film rides on the nostalgia of such childhood partnerships, the crazy antics we do during the summer to pass the time, and the family we gain when we stretch our wings.

There’s something to be said about Luca’s themes of misunderstanding and fear. All too often do we find ourselves looking at another person and categorizing them by their outward appearance. Even Giulia’s father Massimo (Marco Barricelli) isn’t immune from this; he’s a one-armed fisherman with a serious harpoon collection. We all think his lost limb has something to do with his profession, but an almost blink-and-you’ll-miss-it scene reveals the truth behind it. This hit me unexpectedly hard as a father of a disabled child. I see the same looks on people’s faces when they see my daughter; all they see are the crutches and the legs that don’t work like everyone else’s. They don’t see the ridiculously goofy, courageously determined, extremely big-hearted kid that I have the privilege of hanging out with every day. 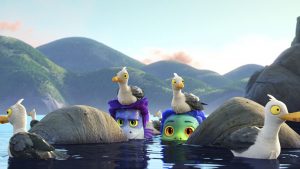 Luca earns its marks by rising above its familiar plot through the theme of being othered. Whether it’s Massimo and his arm, Giulia and her high-as-a-kite aspirations, Luca’s biological nature, or Alberto’s way of not letting anyone get too close, every main character has an identifiable chip on their shoulder that drives a much-needed humanity into the story. Of course, it’s easy to tell the bad-faith actors from the true and benevolent, but that’s the point, isn’t it? We all know good from bad, fair from foul, right from wrong; it’s just a case of us choosing which one we want to be. Luca isn’t offering much more than a morality play in an animated film, but it does make us question how we see what we want to see. It’s asking us to open our hearts to the unexpected to accept what “cannot be categorized, programmed, or easily referenced,” as Fox Mulder once said. Knowing him, he’d have a field day with Luca and his undersea brethren, though…