Posted by Eddie Pasa on June 3, 2021 in Movie Reviews / No Comments

In Caveat’s tightly-wound, excruciatingly tense 88 minutes, you’ll never have a moment where you think, “I’ve got a moment to breathe.” No. Everything – from the introductions to our three characters to the maddening ending leaving some facets unexplained – is wrong (in a wonderful way) and totally off (and off-kilter) about this movie. With his first feature film, writer/director Damian Mc Carthy wields his single location, low budget, and limited cast and crew like an agile swordsman, attacking with purpose and swift deftness while inflicting maximum damage. 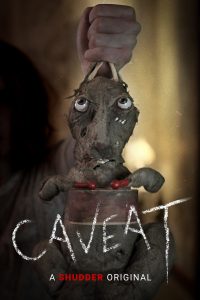 Not even the way we meet Isaac (Jonathan French) and Barret (Ben Caplan) gives us any calm. Barret’s demanding Isaac spend up to five days “babysitting” his niece Olga (Leila Sykes) at the isolated house in which she lives. And we sure aren’t comfortable with Olga either, seen in the cold open holding up a rabbit toy like some kind of talisman… only this talisman has a habit of playing its unsettlingly loud, clacking drum when pointed in certain directions. Barret’s last two provisos are made painfully evident: The house is on an island, and Isaac must wear a leather harness with a long chain preventing him from leaving the house or going into Olga’s room.

All of this comes at you in the first ten or fifteen minutes of the movie, and Mc Carthy doesn’t hesitate to shove us into both the metaphorical and literal darkness inherent in the film. There are a good many shots drenched in complete blackness, scantly aided visually by quick orienting glimpses of various surroundings and bursts of diegetic sound. Richard G. Mitchell’s tingling minimalist score doesn’t intrude in these spaces, thankfully leaving us with no attempt to amplify the already-suffocating atmosphere of Olga’s house.

Meanwhile, upon Isaac’s introduction to the house and Olga herself, we’re hit with numerous “you should’ve said NO” moments. He first sees her sitting in a corner with her hands over her eyes and bleeding from her nose. The painting across from his cot changes positions and imagery when he’s not looking. A basement straight out of our worst nightmares holds devastating frights for anyone who descends the stairs. To top that all off, when Olga’s awake, she’s armed with a crossbow and a damning secret that could explain Isaac’s presence and the odd goings-on – Isaac’s chain lifting from an unseen meddler, a ghastly figure in the shadows, or the drumming rabbit.

Mc Carthy has gone one step further with the “show, don’t tell” ethic by adding one more wrinkle: “Show, don’t tell, and don’t show them everything.” By letting our imaginations run wild with the film’s twists, locations, and spaces devoid of light, Mc Carthy puts us in a state of constant dread from the outset. One crushingly-paced reveal will have you recoiling in sheer terror (I had my hand up to half-cover my eyes because slow-rolling a scare kills me). There are no moments of respite or lightheartedness in any of Caveat; instead, the oppressive look, feel, and pacing bombards us to the point where our muscles lock up in anguished terror as we await the next revelation or scare.

It’s not like he’s faking throwing a ball for a dog to fetch, leaving it wondering where it went; he’s throwing the ball, but it’s just a question of when and how it lands. Numerous threads throughout are laid to connect each head-scratching scene, whether it’s Olga sitting at a table or Isaac’s true role in these proceedings. Some are spoken into existence to help explain the leanest of story to us while some are implied or inferred, sinking us further into our already dangerously deep involvement with the characters and the plot.

Mc Carthy makes us bask in the unbearably taut anxiety of having each of our questions answered with either a sudden reveal or a bite of dialogue that can offer a reprieve. Caveat has no intention of doing the latter, keeping the film’s barb sunk firmly in our chests while we wriggle helplessly until the credits roll. It’s relentless in its method, staying only with the story and advancing it through scene after scene of gut-wrenching, abject fear. The film revels in the viewer not knowing everything; even though Caveat takes a small break to at least fill in some of the blanks, the scales are quickly tipped back in favor of the utterly dark motives of its denizens and the consequences which lie in wait for them all.

Not Rated by the MPA (contains muted violence, some strong language, and unyielding terror – equivalent to a very hard PG-13 or The Conjuring’s R-rating). Running time: 88 minutes. Now on Shudder.
Posted in Movie Reviews