Author’s note: I have not seen Le Convoyeur, the film upon which Wrath of Man is based. 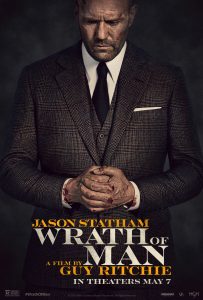 With the exception of maybe one or three films in his 23-year career, I dig on Guy Ritchie movies. There’s nothing else like them. The way he moves his characters through seedy underworlds, his jukebox-style use of music, the world-layering plots and switchbacks, his preponderance of time manipulation, the witty banter and delightful patois expelled from actors’ mouths, his effective use of rapid-fire editing combined with pensive long takes – it’s all a joy to me.

But here I am, 24 hours after watching his latest effort, Wrath of Man, and I’m still surprised at the absolute turnabout from the films which endeared him to the masses. Here, we have Ritchie at his coldest and most straightforward; there’s no snappy dialogue or humor, nor is there any jauntiness granted, as the action hews strictly to the script’s desired efficiency and intensity. When some Ritchie hallmarks pop their heads out, it’s to mount tension or to deepen our discomfort, not put us at ease or make us laugh. Yes, there’s a good deal of time manipulation and the expected perspective-juggling that comes with it, but it’s not to show us funny shenanigans; no, this remake of 2004’s Le Convoyeur (Cash Truck) requires massive amounts of gravitas and personal tragedy, and Ritchie doesn’t hesitate for a second to make us aware of it. 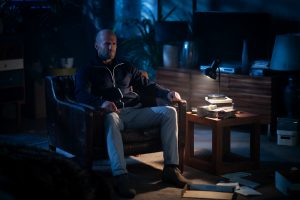 I have been including trailers at the end of each review, but I’m loath to share this one due to the fact that I enjoyed this film immensely not having seen it before my screening. Going in blind to this movie will only heighten your appreciation of what screen adapters Ritchie, Ivan Atkinson, and Marn Davies have in store for you. The trailers tell you is that a man’s son is killed in an armored truck robbery gone wrong, and this man – Patrick “H” Hill (Jason Statham) – is out for revenge. His plan? Infiltrate the truck company to find the men responsible. But the trailers don’t give you everything, and neither will I in this review.

In true Ritchie form, the linchpin event described above is shown from multiple points of view, each providing its own brushstrokes to complete the picture. The first, shown to us in the pre-title sequence, shocks us with its third-person detachment and makes us think of the opening robbery in Michael Mann’s Heat. It’s a dry, one-take sequence with no emotional tint, and we’re to guess that someone goes crazy and kills the armored truck personnel and someone else out of sheer spite. The second and third, given to us later in the film, fill in the blanks with a powerhouse amount of personal information on both sides, and nothing is right about it. At all.

Similar shading is given to other moments, but the way this moment is defined in three different ways is proof of Ritchie’s utter mastery of using this backflipping technique for maximum storytelling effect. We’re devastated by the murders, but each subsequent portrayal deepens feelings of guilt, helplessness, and businesslike necessity. No one gets away clean in this movie, and these perspectives are, indeed, the crux of the entire movie – a three-way battle between H, the armored truck company, and the band of robbers hungry for their next score.

The script keeps it simple, unadorned by the usual Ritchie frivolities; candor, jokes, and split-screen eye-candy are tossed in the ditch in favor of keeping this film stampeding like a merciless juggernaut. Every performance, musical cue, edit, and transition are all attenuated to the mission and honed razor-sharp, leaving absolutely zero wiggle room for tension-deflating 10-ply softness. Ritchie and editor James Herbert have wisely chosen where to glue us to the screen with a long take (several of which go on for good lengths of time) or to jolt us with quick cuts. A noteworthy actor escapes mention in the opening credits to keep us off-guard and on edge, his sudden appearance coming out of nowhere to knock us flat and keep us guessing as to his character and his intentions.

Even with all this, Ritchie manages to find time to slap us with backhanded social commentary. His targets include big business – notably the differences between legitimate and illegitimate businesses and the way both handle employees suffering trauma – and the indifference we give veterans after their service. Both of these subjects are served up as story and plot devices, and both give rise to every conflict, every machination, and every death in this film. There’s no part of this story that isn’t affected by who any of these people are and what they do, and that no bit of this film is dedicated to anything otherwise makes Wrath of Man a haunting homage to the spareness and single-mindedness of Jean-Pierre Melville’s Le Samouraï.

As lean as it is, the main characters are given ample coloring – either on the right or wrong side of the law or those who defy the law – and it causes our perceptions to skew. We know who our hero should be, but is he really? And are the villains really villains, or do we pin them as such because they’ve chosen lives of crime? Yes, these people commit armed robbery, but their personal circumstances add a sad depth to their motivation which causes their actions, to quote Jeffery DeMunn in The Shawshank Redemption, to “be understood, if not condoned.” Do our own preconceived notions of films and societal morality tell us “there must be a hero and villain, and if there isn’t, I’ll be okay with the one who’s more honorable”?

This is why Wrath of Man is unique. It forces us to be uncomfortable with our own discernment between heroes and villains, and it uses something as simple as a heist/revenge film to do it. It’s a think-piece hidden in the trappings of a vigilante action film, less easily-digestible than “a man pushed too far” or “a retired cop” vengeance story. Wrath of Man finds Guy Ritchie playing his usual games – only with the board upside-down and a pawn sacrificed at every move. He boldly and astoundingly transitions to a darker, grittier side only hinted at in previous films, a place where no angels tread and where death drives hope. And for that, Wrath of Man is a stunning achievement.