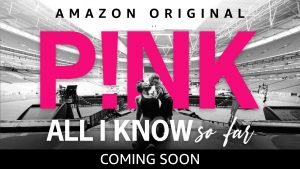 Full disclosure: I’ve been a fan of P!nk’s since hearing “Most Girls” in 2000. As early as this part of her nascent career, I could tell she was a disruptor. She wasn’t happy with being slammed into the same space as her female contemporaries. Everything was different – her look, sound, vocal tone, and a lash-out-at-everyone anger which gave her lyrics and music a searing edge. Her second album is what sunk her hooks in me, with half the songs being written by former 4 Non Blondes (remember their ‘90s hit “What’s Up?” with that huge sing-along chorus?) frontwoman Linda Perry and containing even more of P!nk’s personality. This album’s sonic palette ranged from rock to R&B and everything in between, and we started to see more of the pain she would draw upon to create some of her most memorable songs.

After several worldwide smash tours (I’ve seen them all from Funhouse onward) and hit album after hit album, P!nk and The Greatest Showman director Michael Gracey (who also directed her “Walk Me Home” video) offer us a glimpse into her two lives – as both a touring artist and as a wife and mother – in the engaging documentary P!nk: All I Know So Far. We all know what it’s like on the road thanks to numerous documentaries and films about bands and solo artists. Even Rob Reiner’s seminal mockumentary This Is Spinal Tap had some nuggets of truth about the touring lifestyle amid its constant parade of shenanigans. 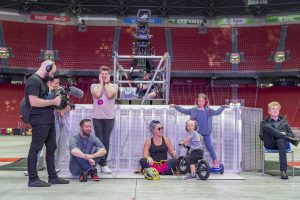 Here, the shenanigans are kept to a minimum thanks to a ridiculous amount of hard work, talent, and technical prowess stemming from her drive to better herself on all fronts – as a performer, parent, and partner. Gracey’s cameras take us through the rehearsals, shows, and finding time to devote to her family in the 20 days leading up to two epic nights at Wembley Stadium. Between harsh self-criticism during production meetings, adjusting the stage plot because of dancing logistics, doing her own hair, making sure her flying rig is secure, painstaking rehearsals, and actually doing the gigs, it’s impossible to even ponder how someone can take a family on the road like this.

However, like everything else she’s attempted, she executes it in her own inimitable fashion. Days and rehearsals are spent with her kids tagging along, having endeared themselves to every musical or stage crew member. Husband Carey Hart is right beside them every step of the way, preternaturally knowing when to step in and when to fade back. Granted, she’s more than earned herself and her family this entitled lifestyle which anyone would be more than happy to step into; I mean, wouldn’t you like to be able to take your family around the world while you perform? But she doesn’t use it wantonly or capriciously – she revels in what each location has to show everyone, taking time with both her family and her crew to enjoy where they are. 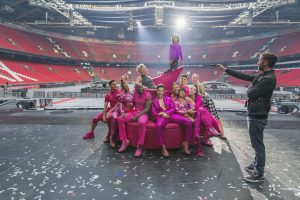 But when P!nk works, she is ruthless in her pursuit of giving every crowd something memorable. However, she’s no diva or queen, and she certainly doesn’t have LSD (lead singer disease). A lot time is spent witnessing her at her candid, makeup-less best, without any of the polish we see in her stage appearances; her longtime “I don’t care what you think about me, this is who I am” mindset puts everything out there without spin. Her turbulent past has taught her well, and she’s used it to build her own brand of lifting up, whether it’s her then-two-year-old son Jameson, the musicians and singers who’ve been backing her up for years, or the audience themselves. Most importantly, she wants to make sure daughter Willow has the empowerment to go forth in this world and the confidence to express herself and call her own shots, even if it’s making a decision that might bring her time with her mother in Europe to an end.

The most notable aspect of P!nk: All I Know So Far is the duality of its lead figure. When we see P!nk onstage, she’s fearless (although it doesn’t come without a small hitch, no pun intended), powerful, and absolutely magnetic. But when the show’s over and Alecia Moore sheds her stage costumes and the worries that come with it, we see a loving vulnerability alternating with a jokester side she retreats to when things aren’t going quite right. To see Gracey and editors Brad Comfort, Cindy Mollo, and Larn Poland tell it, there’s not a lot that doesn’t go completely wrong in her world, but her parental struggles are just the same as every other parent’s – devastating at first glance, but coming out the wiser afterward. These struggles are the heart of the film, and through her humor and “take it or leave it” persona, she succeeds by tackling professional and personal problems with the same tact and spirit as she tries her best to make everyone’s life just a little better than it was before. 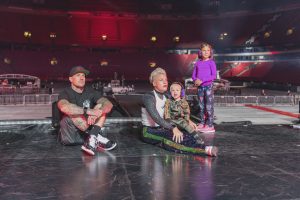 And that’s her life in a nutshell. One of the most resonant quotes in the film comes after a terrifying performance mishap, and it wonderfully sums up her outlook, the shows she puts on, and the life we all have to look forward to: “I’m not gonna miss a beautiful day just because the day before hurt.” In both capacities as P!nk and Alecia Moore, she takes a lot on her shoulders, whether it’s her family’s health and happiness or the high-flying antics and striking dance moves which make her shows legendary. Underneath everything is a driven woman who knows what she wants, how to get it, and how to spread the joy to everyone in her path. P!nk: All I Know So Far feels a lot like her shows in that it’s too short a time spent watching a fascinating person who seems to be more interested in giving than taking. Her irrepressible personality lights up her time on stage and with her family with an undeniable magneticism, and she leaves us almost as quickly as she entered, but not before giving us more to like about her.

Not Rated by the MPA (contains language and drinking – the usage of the f-bomb, however limited, would garner this an R rating). Contains footage amid the credits. Running time: 110 minutes. Released by Amazon Studios.
Posted in Movie Reviews