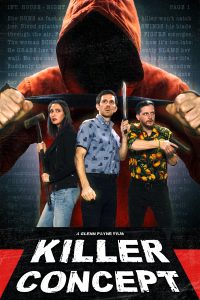 One of the pandemic movies I was fortunate to review last year was this little gem of a no-budget independent film called Driven, starring Casey Dillard and Richard Speight, Jr. When you know the filmmakers and actors are working with a limited budget and crew with no access to locations or props they already own or have been given permission to use, you want to see how inventive they get. Driven was full of necessity (being the mother of invention), but it was also full of fun and a supercool DIY ethic and feel that instantly endeared it to me and my family. Almost a year later, Driven director Glenn Payne and Dillard have come roaring back with a film made for $900 and with only a five-person crew. The result? Killer Concept is another feather in their cap, surviving its meager trappings and becoming more than the sum of its parts. Payne, his actors, and crew fulfill multiple roles behind the camera, but this finds Payne stepping in front of it, joining actors Dillard and Coley Bryant in a film that speaks more about the creative process than it does its seamier subject matter.

Credited story creator Dillard (the dialogue is improvised) takes a look at three screenwriters trying to capitalize on a spate of murders in their hometown. Young girls have been kidnapped and found with parts missing, and there’s a larger problem: nobody’s been arrested for these murders. Seth (Bryant) is having a little too much fun with it; cutscenes show us his salacious, stalk-and-slash vision for the movie, which makes for a missed opportunity in Holly’s (Dillard) eyes. As a true-crime novelist, she thinks there needs to be more than just Seth’s rote, facile, and tired take. She seems to be in tune with what the killer’s motivations and methods are, and she wants to go deeper into the killer’s psyche. As for Mark (Payne)… haven’t you guessed? If not, you’ll find out right before the opening title flares onscreen. 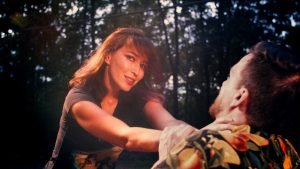 This one-paragraph description might be as much of a blueprint as Dillard might’ve come to the table with at Killer Concept’s first production meetings. All of the rest has been eagerly fleshed out by our trio, each pushing heavily into their roles. Seth’s the overly alpha, I’m-right-all-the-time type, looking to make their proposed script pop with scares and Wes Craven-type disappearing-killer fits and starts. He steals blatantly from Friday the 13th Part 2 and Halloween, leaning more on the ostentatious than the subtle; at one point, you wonder if he only wants to make this movie to see naked women on set. Coley Bryant plays Seth up obnoxiously and rudely, showing out with his wild-eyed enthusiasm for the kills, but turning altogether more normal when faced with real murderous circumstances.

At loggerheads with him is Holly, whose pleas for a more grounded, psychoanalytical approach fall on deaf ears. I appreciated the weary soul Dillard gifts Holly; she acts like she’s had to fight an uphill battle against the patriarchy her entire career, and now she’s gotta listen to this twat rave up and down that her ideas aren’t good? Hell for that; she doesn’t have to take it, and she won’t. There’s something else behind Holly – hard-earned wisdom, maybe a fall from grace, or some kind of chip on her shoulder – which, aligned with her thinning patience for Seth, makes her the spark that ignites the gas that’s slowly filling the room. 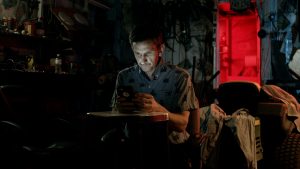 Mark’s more of a silent type, observing who actually has the proper handle on what’s actually going on. He’s torn, his own ideas and needs buried by being ignored as their writing sessions go on. It’s a three-way game, but the ball seems to be only bouncing (quite literally, in one scene) between Seth and Holly, and Mark’s left a little by the wayside. He’s supposed to be the cinematographer, so one questions why he’s in the writer’s room, but it’s clear he’s wanted there by both of them (at least at the beginning). But the further they try to proceed, the more things get bogged down by too many voices and too little action, a frustration which grows inside Mark as the other two jaw at each other with no progress made. Payne plays it right down the line of just-right through most of the film and a little overmuch in some scenes, but he reins it back in and keeps Mark as a likable milquetoast caught between two power-grabbers. For obvious reasons, he gets to dive in a little deeper than the other two, keeping us in the realm of the believable and, ultimately, tragic.

The creative process is very much like this, caught between “best idea wins” and “whatever makes more money.” It’s a war of head (Holly) versus heart (Mark) versus wallet (Seth), and you don’t know which one has to lose until you need to make that hard choice. Mark’s frustration that’s built up by the other two getting nowhere feels like writer’s block clogging up the synapses with the repeated “What if we do this? Nah, what if we do THIS?” Eventually, Mark tries to strike out on his own (in a manner of speaking), but even he’s hampered by his inability to do what needs to be done. These three characters all feel like a part of the same mind afflicted by a creative block, and it’s only a matter of time before one of them breaks through. 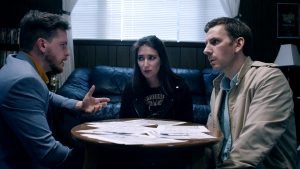 Payne and company keep things moving, unafraid of their budget and not hesitant to make it look like a whole lot more. Like Driven before it, Killer Concept comes from a place where you know everything’s being done for the love of movies and storytelling, and the fun had on set is a huge bonus. There’s no one giving you studio notes, telling you what not to do and crushing your spirit; there’s only you, the camera, the actors, and whoever happens to drop by on set that day that’s willing to lend a hand. Granted, there are a lot of artists like this out there who make films on shoestring budgets, but there’s something behind the two Dead Leaf productions I’ve seen that helps them rise above the rest. Maybe it’s the DIY ethic mixed with their seasoned-pro feel, or maybe it’s the way Payne’s films make us inhabit their characters while we root for the best for them. I have no idea how he imbues his films with his kind of charm, but Killer Concept joins Driven as another enjoyable treat from Payne and Dillard.