Let’s step back about 25 years and open this review with some film dialogue, shall we?
Person 1: Why did you kill my mother?
Person 2: Why? WHY?! You hear that, ___? I think ___ wants a motive. Hmm, I don’t really believe in motives, ____ – I mean, did Norman Bates have a motive?
Person 3: No.
Person 2: Did they ever really decide why Hannibal Lecter liked to eat people? Don’t think so! See, it’s a lot scarier when there’s no motive.
— From Wes Craven’s Scream, 1996. Names withheld to prevent spoilers. 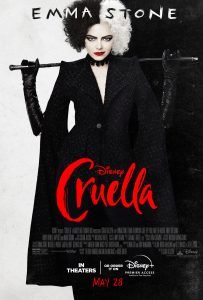 When it comes to the latest live-action attempts at retconning and reimagining a former Disney villain by giving them humanizing and ambiguous backstories, this is exactly the movie quote which comes to mind. In reaching back to established lore and spinning a character a different way, are they trying to make a new story and continuity altogether, or are they trying to expound upon established canon while staying within its scope? Maleficent and its sequel, and Alice Through the Looking Glass – these films have the effect of removing the scariness and heartless evil of their animated forebears for modern audiences. And another movie quote comes to mind when thinking of this: 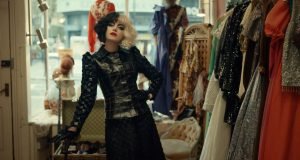 This sums up Cruella, a film which revels in equivocation by playing itself off as a Steven Soderbergh Ocean’s-type movie, only without any of the personality. For sure, it’s got terrific music – the Ike and Tina Turner covers of Led Zeppelin’s “Whole Lotta Love” and The Beatles’ “Come Together” are standouts that’ll prick up your ears – and it’s got heist-style antics shuffled in to maintain entertainment value. But the film’s biggest problems lie in its restraint and how it tries to both-sides everything. There are no heroes in this movie, only shades and degrees of how “bad” a person is, which leads to a shoulder-shrugging experience.

Right away, the film puts us on the defensive as a woman is pushed off a cliff in front of her young daughter Estella (Tipper Seifert-Cleveland), leaving her an orphan. She’s already been kicked out of private school because a rushed introduction tells us fighting back against bullies is… wrong? Then again, it’s the 1950s or so, the era in which women were seen and not heard, so it’s no surprise neither her expulsion nor her mother’s sudden death gain much notice from bystanders or the press. 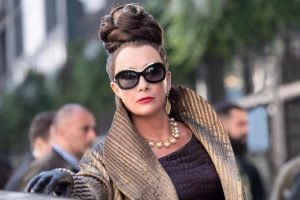 Estella seems to have an inner battle between her sweet Estella self and someone she calls Cruella, the other side of her personality she deems responsible for the trouble and mayhem she perpetrates. However, what the school headmaster calls trouble is just her defending herself or getting her own back after any one of multiple humiliations thrown at her. Again, it’s a different time for women, but one has to ask: Would the story be any different if someone at least had taken her part or asked her side instead of angrily blotting Estella’s logbook with black marks? What if someone had been in the position to keep nurturing her creative side or stick up for her?

No one does except for two street thief kids – Jasper (Ziggy Gardner) and Horace (Joseph MacDonald) – who befriend her after finding her sleeping on a park fountain. Those of you familiar with 101 Dalmatians now know a version of the horrible trio’s story… but it’s been framed through a “kids against the world” lens, building them up as underdogs we have to root for and champion. Flash forward at least 10 or so years later, and they’re still living in the same squat, getting by with stealing wallets and other dodgy scams. Jasper’s (Joel Fry) just made the best swindle he’s ever made: Through sleight of hand, he’s landed Estella (Emma Stone) a job at Hellman’s, a fashion label run by the Baroness von Hellman (Emma Thompson), a cold and unforgiving woman with no time or love for anyone but herself. 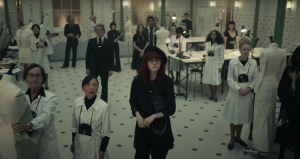 When Estella suddenly proves her worth to the Baroness, she’s promoted from toilet-scrubber to being on the team creating the Baroness’ new dress lines. However, she’s disillusioned by the way the Baroness treats people and takes credit for their designs. She’s definitively turned by the fact that the Baroness was directly involved with her mother’s death. And nothing brings trouble like a woman scorned – doubly or triply so if that woman is Estella, whose Cruella side takes over like a freight train speeding downhill with no brakes. We’re not talking about Dissociative Identity Disorder; both sides of Estella know full well what’s going on. It’s more a case of who this woman truly is – the meek and bookish factory worker or the sneering and powerful upstart with incredible fashion sense and a knack for getting herself in the news.

It’s not like Estella’s transformation to fully embracing Cruella is slow and deliberate; it’s almost like a switch is flipped and she is instantly Cruella, flipping back to Estella as the face she puts on for everyone outside her gang’s hovel. She adopts a more sultry and frosty affect in her voice, and it’s obvious that the Baroness’ power and complete lack of care for anyone else are starting to rub off on her. While Cruella becomes the paparazzi and fashion world darling, her friends Jasper and Horace (Paul Walter Hauser) are starting to feel more like underlings and less like equals and the ersatz family they once were. And now, the three-pronged conflict – Cruella vs. the Baroness, Cruella vs. Jasper and Horace, and Cruella vs. Estella – is complete, and it’s… meh. 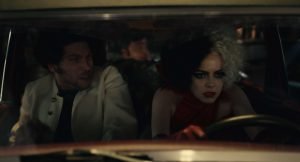 As stated before, there are no heroes in this movie, only varying degrees of “bad.” On the whole, Cruella feels like the title character was transplanted from a Batman movie into the 101 Dalmatians canon. It’s a neat mix, to be honest – parental loss leads to fighting against the Big Bad, the duality of both the hero and villain, the two flunkies who can only grow more frustrated as their supposed equal takes a leadership position, the genteel butler who has the best intentions at heart, and a HUGE nod to Selina Kyle becoming Catwoman in Batman Returns – but because of this “everyone sucks here” kind of waffling between bad and less-bad, no grounding tone can be struck. There’s no purely good character – even Kirby Howell-Baptiste’s gossip journalist Anita (who’s also Estella’s only school chum) is defined as playing on Cruella’s side, which may only be the lesser of two evils, but still pretty legally disruptive nonetheless.

Not that there always needs to be a hero or “good guy” in a movie, mind you. Cruella is, as mentioned before, an underdog story (no pun intended), but barely veiled as a race to see who reaches the evil bottom first. And at movie’s end, is Cruella really evil? Or is she just a troublemaker? There’s no sign of the hag from the 1961 film who made dogs into fur coats. Several plot points come close to this, but they illogically dispel the Cruella De Vil that we’ve known for such a long time. A mid-credits scene also makes as if to dovetail into the 1961 story, but it’s a complete contradiction and rewrite of who Cruella is. She is made into a merry prankster with a soft spot for dogs; we’re on board with what she’s doing and why she’s doing it, but this reinvention doesn’t stand up. Cruella doesn’t know what it wants to be, and it has a tough time digging out of the many holes it makes for itself.