Writer/director John Krasinski didn’t want to make a sequel to his 2018 smash A Quiet Place, claiming it was “a one-off,” something that needed no further advancement. However, he soon realized the possibilities of expanding the world of the film and the metaphors which rang so soundly throughout it. A Quiet Place wasn’t just about aliens tearing humanity apart; it was about our lives as parents shielding our children from the dangers the world or even they themselves present every day. 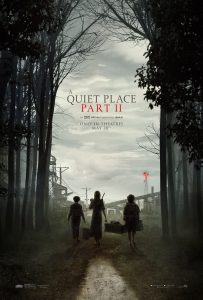 Krasinski’s solo-written follow-up (original screenwriters Scott Beck and Bryan Woods did not return), A Quiet Place Part II, extends this theme to maturing and growth. We all have to leave the nest and make our way gingerly through a world that doesn’t want to hear us or what we have to say. But we keep fighting for that chance as humans to ensure we are not silenced or oppressed. It’s a struggle we see in every facet of our lives, from the relentless news cycle which reinforces just how much we amount to in the eyes of the powerful to our own battles at home, in our schools, or at our jobs.

What happens when we grow up? We take the mantle set forth by our parents and try to do the right thing. To keep moving forward and progressing past our histories. The Abbott family – whose numbers diminished as a result of the events of the first film – can no longer stay at their haven full of hidey-holes, booby traps, and warning systems in place to keep them safe from the alien intruders. And when they go past their comfort zones and into unfamiliar territory, the film opens up and makes heroes out of the unexpected. 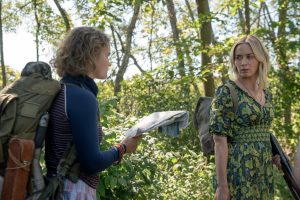 Back for this tense, thrill-laden film are Abbott family matriarch Evelyn (Emily Blunt), deaf teen Regan (Millicent Simmonds), anxious Marcus (Noah Jupe), and a newborn infant, seen delivered in the last few days of the first film. They’ve seen a signal fire miles from their home, and they’re looking for the person who set it. Instead, they can only watch as Marcus suffers damaging trauma, after which a masked man picks him up and runs to a secret room in an abandoned steel mill. Emmett (Cillian Murphy) is an old friend of the Abbotts, and his family – seen in the “Day 1” cold open – is nowhere to be found.

Emmett’s given up. His family’s gone, his supplies are dwindling, and there’s no way all five of them can live in the small hideout he’s fashioned for himself. The world has turned and left him there, to paraphrase one of my favorite Weezer songs, and there’s no reason for him to continue past getting the Abbotts out and moving onward. But Regan’s secret weapon (discovered in the last half of the first film) against the aliens gives him his fight, and they both embark on a perilous journey to the source of a radio signal which plays Bobby Darin’s “Beyond the Sea” on repeat. 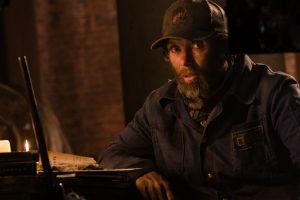 It’s odd seeing this film in the light of a post-pandemic world. As this film was produced well before COVID-19 shut the world down, it’s almost spooky how prescient Krasinski’s script shows itself to be. A lot of our pandemic fears are seen in Emmett and how he wants to push the Abbotts away lest they bring death with them. Throughout Regan and Emmett’s travels, we see an abandoned railway station full of artifacts left behind by those on the run. Much like us in the last year, there are sequestered groups – some who just want to live life normally, some who believe it’s Mad Max apocalypse time, and some who just want to carefully go about their business without someone screaming at them.

But take away the events of 2020, and you’ve still got a film that speaks loudly amid its silence. I’m not talking about the jolting sound design or the spoken/signed dialogue; this film carries so much metaphorical weight on its shoulders, and it’s got the strength to carry it all the way to the end. Millicent Simmonds’ Regan becomes our anchor, full of hope and the need to do what she can for human survival. Her actions drive the film more than she did the first go-round, as she is given more action than merely being a mistakenly neglected child who always needs rescuing. Both the character and the actor have grown into themselves, and Simmonds imparts this into every bit of Regan, from her decisiveness to her heart-wrenching exchanges with Emmett. 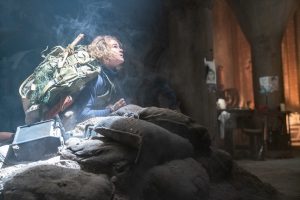 Noah Jupe’s Marcus also steps forward, but not in the sense of “becoming a man” like his father Lee (Krasinski, seen only in flashbacks). Instead, Marcus is enduring his own growth through trial and error, and his story makes a perfect companion piece to Regan’s. When both try to move forward regardless of forces threatening to hold them back or kill them, they each make their little microcosms make sense to them and their situations. Marcus is put in charge of his baby brother while Evelyn forages for supplies, and he has to fight through the mistakes he makes as a hobbled kid who’s well in over his head. Watching both Regan and Marcus simultaneously face these challenges charges the film with nonstop suspense, and Krasinski wrings every last bit of tension he can from having them tackle not just the literal danger, but the figurative steps toward maturity and coming into their own.

The secluded setting of western New York provides more than ample space for the action to breathe, becoming a character itself that the Abbotts and Emmett must contend with. Lensed with sharp acuity by Polly Morgan, we see these forests, abandoned towns and structures, and even open water as potential threats, claustrophobically enveloping us while maintaining the illusion of freedom. Editor Michael P. Shawver allows Morgan’s long takes to immerse us in these surroundings and amplify our terror by giving us time to appreciate what lies ahead of – or lies in wait for – our heroes. 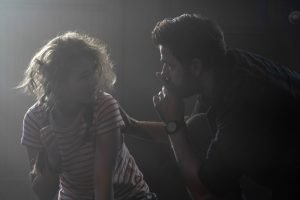 Krasinski’s note-perfect direction never stalls or fails, keeping the film moving forward to match the metaphor he so richly layers into each frame and every bit of dialogue. There are no times where we feel unsure of the story or its characters, with every scene developing and heightening intensity, building toward its furious climax. He doesn’t give anyone the “Why did you do that?!” moments that pad films like these; there is not a spare, throwaway cut or scene to provide any rest, whether it’s from the vicious extraterrestrials or the emotions holding these survivors together. A Quiet Place Part II follows the original by jumping us out of our chairs when we think it’s safe to draw a clean breath, hammering us right back into the scares and high danger, its tension stretching our nerves to the point of fraying. But it also continues the giving and hopeful nature of the first film; even though the odds are against them, there’s a foundation of strength and love which clears the path for the impossible to be overcome.