Let’s get one thing straight: I live for the Jack Ryanverse films. The Hunt For Red October is on every playable medium in my house (Blu-Ray, 4K, DVR, streaming, and the sell-through widescreen VHS is in a cabinet upstairs somewhere), and channel surfing stops when I find Patriot Games or Clear and Present Danger. I even check out The Sum of All Fears – which I didn’t like much when I saw it in theaters – when it’s on cable. So when I heard Michael B. Jordan was going to re-establish the John Clark character in Without Remorse, an adaptation of Clark’s origin story, I rejoiced. Here’s a guy who has the physicality and the acting chops to play a younger version of the hard-bitten character featured in many Tom Clancy novels and played in Clear and Present Danger by Willem Dafoe. 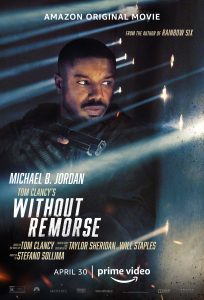 But I didn’t expect him to be the best thing about the movie. Jordan, Jodie Turner-Smith, and the presences of veteran actors Jamie Bell and Guy Pearce are the only factors saving this film from obscurity and utter failure. It’s not their fault; the script by Taylor Sheridan and Will Staples and uneven direction by Stefano Sollima jar us out of the film too often to be truly at one with it. A lack of nuance combined with hasty, badly executed attempts at humanization or dangling red herrings overdoes the drama instead of maybe playing it a little less forward and obvious, leaving us with only the performances to admire.

The whole thing starts by making sure fans are uncomfortable with Bob Ritter (Jamie Bell) being in the command seat for the film’s opening extraction mission, which finds John Kelly (before he received the Clark surname) fighting his way out of a Syrian stronghold. Ritter’s just duped the SEAL team into a search-and-destroy mission, and the opposing force is not at all who the mission report said they were going to be; instead of low-level scumbags, they’re ex-Russian military, and the hostage they’ve rescued… well, we don’t find out too much about him, which seems to be a leitmotif for anyone who’s not John. 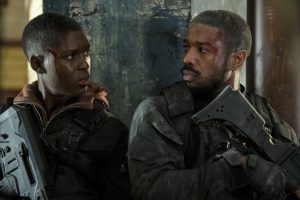 Soon after, two members of the SEAL team turn up dead; a third attempt leaves John’s pregnant wife Pam (Lauren London) dead and John riddled with bullets as a result of the mission. Eventually, we learn that the people responsible are part of the same Russian squad they all but exterminated in the film’s title sequence. It also appears that a dead Russian whom the CIA supposedly killed is the man who pulled the trigger on Pam. Thus begins John’s revenge mission, and like Karen says when describing John’s current mental state, it’s “messy.”

There’s nothing here you haven’t seen in countless other espionage or government vs. government-type films. Some real chestnuts – the dead pregnant wife, being imprisoned with the very people you’re trying to avoid, the betrayal you see coming from miles away, the hero making the villain say a deceased victim’s name before they die, and various shouts of “Give me a name!” and “Get the gear!” – are trotted out and given brief life before being shoved back in the closet where they should’ve stayed. The film steals linchpin sequences from 2002’s The Bourne Identity and even the bathroom scene from Green Street Hooligans (you’ll know it when you see it). Most damningly, the film conglomerates plot lifts from the aforementioned Clear and Present Danger and The Sum of All Fears, which might be an unoriginal step too far. 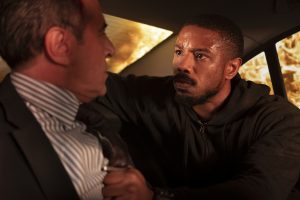 There’s no cleverness to Without Remorse, save for a few scenes where John relies upon his brute strength and his always-surprising ingenuity. Everything is exactly as you see it; there’s no deeper meaning behind anything, and there’s no audience involvement with any character except for John. He is where our focus lies for this film’s duration, no matter how much Sheridan, Staples, and Sollima want to try to make you care about the ancillary characters. The perfunctory “getting to know the team” moments only serve to mine some sort of ill-begotten drama and to try to make the stakes bigger, but these bits fall resoundingly flat. Even Karen is given the barest minimum of development as a strong SEAL team leader, germane only to John being included in the film’s climactic mission. Secretary of Defense Thomas Clay’s (Guy Pearce) only purpose seems to be passing approving or disdainful looks at how Ritter’s handling this burgeoning situation between the U.S. and Russia, and it’s a wonder he’s even been given that much to do.

All we’re left with is Michael B. Jordan anchoring this film with his solid performance (and astounding physique). He gives John a single-minded drive and fury, which we see manifest itself in his threatening persona and the various fight scenes, whether hand-to-hand or weapons-oriented. The action is definitely noteworthy and watchable, but aside from John and Karen, there’s no giving a damn about the other expendable chattel, try as the writers and director might. No, our singular focus is John Kelly and his mission to avenge his wife, going all the way up the chain for the person ultimately responsible for his wife’s death. Even that much is a slight theft from Rian Johnson’s Brick, where a high-school gumshoe sets out to find who put his dead girlfriend in front of a bullet, not the person who shot her. (Which, in turn, could be said about any generic revenge story – including Gleaming the Cube.) The film’s major crime is not that it’s unoriginal; it’s that it doesn’t know how to incorporate these influences into a cohesive whole, nor does it make us care about anything that happens to anyone. Much like Without Remorse’s hero, it’s functional, hard-hitting, and gets the job done, but at the expense of not being invested in those around him.

Rated R for violence (honestly, it could’ve been a PG-13 – there’s not much foul language, and bloodier action has been seen in lesser-rated films). Contains a mid-credit scene. Running time: 110 minutes. Released by Amazon Studios and Paramount Pictures.
Posted in Movie Reviews