Well… fans had high hopes for the fully rated-R adaptation of the ultra-gory Mortal Kombat video game series – especially since we were denied the blood and spine-rips in Paul W.S. Anderson’s PG-13 guilty pleasure from 1995 – and here it is. In all its squicky glory. That’s what you’re going to watch this for, aren’t you? You want to see how director Simon McQuoid uses the R-rated space to make his film match the game’s brutal violence and style.

What was the game, really? A tournament where Earthrealm faces extinction from the oncoming forces of Outworld unless a band of Earthrealm fighters wins. It was one of the most famous and controversial fighting games of the 1990s, generating through-the-roof sales – largely due to its targeted teenage audience wanting to play a game with where you could kill your buddy’s character in one of many bloody ways – and parental outcry over its graphic nature. Its very existence was deemed so dangerous, it was probably the biggest factor as to why the ESRB video game rating system was created. (Looking back… oh, how times have changed.)

Other than that, there was no story other than the thin setup provided after you hit the “Start” button. You fought and you either won and progressed, or you started back at square one. Largely no one had internet access, so players had to rely on word of mouth and magazines for codes or special move combinations. But that was where the game’s magic was: the special moves, whether it was Sub-Zero’s ice blasts, Liu Kang’s bicycle kick, or the many finishing moves you could inflict upon the unlucky bastard swaying defenseless in front of you. Mortal Kombat creators Ed Boon and John Tobias created a game you wanted to play because of its easter eggs and secret combinations, and that was a hell of a sales hook.

But as a movie where you have to create drama to fill screen time between the fights? Anderson didn’t quite get it back in 1995, owing largely to the desired (yet hamstringing) PG-13 rating they wanted to get its teenage audience in theater seats. With this new reboot, to be honest, McQuoid does his level best and makes an exciting, watchable film of Greg Russo and Dave Callaham’s screenplay. It mostly sticks to the numbers as far the rote setup, involvement, and action beats you’d expect from a Saturday afternoon martial arts flick. That’s part of the charm of this film; Russo and Callaham take their opportunity to mix old-school chop-socky and modern sensibilities, and it’s this mix that makes Mortal Kombat an easy watch.

For those familiar with the 1995 Anderson adaptation of Mortal Kombat, you’ll be happy to know not much has changed. An outsider – Cole Young (Lewis Tan), a brand-new character in the Mortal Kombat universe – is suddenly thrown into a mystical world of deathmatches and Elder Gods with a ragtag group of other fighters destined for the tournament. Here, all of them bear the same mysterious sigil (it’s the Mortal Kombat dragon logo) on their skins, whether it be a birthmark or taken from its former owner (read: killing someone with the mark transfers it to the victor). But Russo and Callaham take it one step further and establish two of the game’s legendary characters in the cold open, featuring a hastily-fabricated confrontation between Bi-Han (Joe Taslim) and Hanzo Hasashi (Hiroyuki Sanada) – who would later be respectively known as Sub-Zero and Scorpion – in 17thcentury Japan.

These two characters loom large throughout the rest of the film, with Sub-Zero being a member of Outworld lord Shang Tsung’s (Chin Han) hired warriors and Scorpion’s descendant Cole making his way into the tournament in the present day. He’s recruited (shyeah, right) by Jax Briggs (Mehcad Brooks) and Sonya Blade (Jessica McNamee) just as Sub-Zero makes an attempt on Cole’s family, and there’s your drama. Cole, an MMA fighter past his glory days, has to fight to save Earthrealm and his family, so you know he’s got skin in the game. The others are just as not-meatily developed – Jax is given all of maybe two minutes of screentime before disaster happens, and we have barely enough time to meet Sonya and mercenary Kano (Josh Lawson), a man who’s chained up in Sonya’s bunker, right before a Shang Tsung minion shows up and throws them further into the fray.

I’ve used the term “action sequence facilitators” before when describing how characters are reduced to the bare minimum in order to give the audience more bombastic blow-ups and fights, and the term could not be more perfectly used here. All characters are given just enough for us to go on, but not enough to make us care or want to empathize with them. McQuoid’s Mortal Kombat was built around the action scenes, but to its detriment, the characters are too much of a mix of corny and dead serious for any specific tone to be struck. It’s not an intentional kind of humor; it’s rather forced, especially in the way Kano is conceived and executed as a misogynistic relic from the ‘90s who takes pleasure in making sure Sonya knows her place in Kano’s eyes. And don’t get me started on the literal “fridging” that happens in the last act – it was a predictable throwback to the 1995 film, only without Sonya being suddenly dressed in caveman-type clothing. 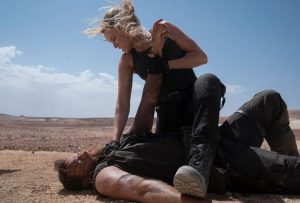 For what it’s worth, Jessica McNamee’s never put in sexy outfits or made to lean upon sex appeal, which is an admirable upgrade from the previous film; she and her character are treated with a decent amount of respect, comparatively. Other similar improvements include the relationships between the characters (most notably that between Liu Kang [Ludi Lin] and Kung Lao [Max Huang]), Tadanobu Asano’s light channeling of cinematic forebear Christopher Lambert as Lord Raiden, and the development of Sub-Zero and Scorpion, previously relinquished in past films to “GET OVER HERE!” or other such lines they spoke in the video games, if they spoke at all. Russo and Callaham angle for at least some semblance of a humanist tone throughout, but it’s largely overshadowed by how much all the characters only speak when there’s something important to divulge to the audience about their characters. These people are largely devoid of personality, but what do you expect when the greatest improvements are…

… the kills. Yes, special moves and Fatalities – along with the required recitation of “FATALITY!” and “FLAWLESS VICTORY!” (the latter delivered after one abjectly disgusting finishing move) – are finally given cinematic life, and they don’t disappoint. (Except for the fact that we don’t see Sub-Zero rip someone’s head and spine out of their body, but that might have been a bit much.) Yup, McQuoid makes the most of the R-rated leeway, featuring The Raid-style stab-and-rip wounds, a gruesome decapitation, an evisceration, and other such disfigurements that made the Mortal Kombat game series infamous. Some are definitely cheer-worthy due to the character who receives such punishment; others are probably best defined as “Oh, why?!”

Taken as a whole, this iteration of Mortal Kombat is the filmed adaptation we’ve been waiting for since the rumors of a movie swirled around in the early ‘90s. Its story may not lead to much, but it’s got it where it counts; the rapport between the characters, the kinetically-shot wide-angle fight scenes (that thankfully aren’t chopped up too much), and the ability to show longtime fans the finishing moves that endeared the game to players the world over. Sure, there’s not much in the development or acting department, but we’re not here for what Wayne’s World would label an “Oscar Clip.” No, we’re here because we hoped for a competently made martial arts film where the fights end with someone’s head exploding. And this, dear readers, is what we get.