Posted by Eddie Pasa on March 4, 2021 in Movie Reviews / No Comments

If we were to boil Kelly Marie Tran’s character Raya down to her bare essence, it would be this: You can’t lose what you don’t give away. After six years of running from monsters and enemies, she’s bitter and hard, the result of being bitten by betrayal and loss, especially at so young an age. Let’s put it this way: If you were attacked by a dog as a child, would you be scared to go around them for at least a little while? (Speaking from personal experience, yes.) But eventually, life comes to a point where you have to deal with these feelings, either to move past them or to mend fences and make peace. 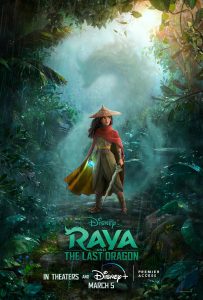 On the surface, Raya and the Last Dragon seems more than similar to Walt Disney Animation Studios predecessors Frozen, Moana, and Big Hero 6. There’s a land split asunder by the loss of a magic stone; a lone hero is joined by unlikely abettors; the villain is misunderstood, only acting in the interest of her people and following orders; and there’s a freezing (of sorts) brought on by personal sacrifice. You can’t fault Disney for being consistent with the application of their formula; the aforementioned movies were runaway hits, so… if it ain’t broken, don’t fix it, right?

The film is packed full of stock, arch portrayals, extending past the animation to the voice performances and the script. Raya’s written to be the person who can’t trust anyone, not even open and honest folks trying to lend her a hand. Likewise, Namaari (Gemma Chan) is the character torn between a childhood myth, doing what’s right, and doing what her chieftess mother Virana (Sandra Oh) commands of her. The overly boisterous shrimp boat chef Boun (Izaac Wang) is a smooth-talking salesman who seems to have jumped from little kid to carnival barker. (Honestly, I feel like we’re seeing a version of that kid who makes eyes at Moana while she teaches dance.) Even Tong (Benedict Wong) comes in as the gruff brute with a heart of gold. And titular last dragon Sisu (Awkwafina) is the idealist who believes all conflicts can be solved by simply understanding the other side and trusting them to work together.

But there’s something in the way they’re whisked in the bowl – either working at loggerheads or in concert with each other – which makes this recipe strong and hearty. Maybe it’s the feeling of working as one, something lost in our daily discourse lately. Or discovering that walls can be broken down and people are generally good, dispensing with preconceived notions and digging into the truth of people. Or believing in the best of people and not being let down.

“I’d like that… but that s___ ain’t the truth,” as Jules Winnfield once said in Pulp Fiction. The truth is that this film comes at a precarious time in US and world history. It’s a film with Asian characters and surroundings in a time when misguided violence against Asians is on the rise. Raya and the Last Dragon asks its characters to work together with their neighbors toward a brighter future when the neighbors have no interest in doing so. In fact, they think the worst, even going so far as to storm a temple to take the only thing – the magical Dragon Gem, guarded by Raya’s people – protecting their lands from the Druun, monstrous wraiths who turn the living into stone. And when their theft fails and the Dragon Gem is broken, they steal the pieces and run back home. Yeah… it hits a little harder than expected. 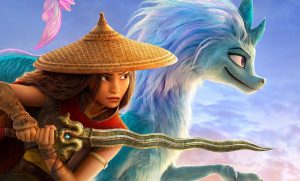 “If we don’t start learning to trust one another, then it’s only a matter of time before we tear ourselves apart,” Raya’s father Chief Benja (Daniel Dae Kim) says. We’ve been steadily seeing more and more of this in our political and social climates, to the point where a children’s movie seems like it wants to be the only beam of lumber trying to hold a dam upright against an oncoming flood. It’s not that the hope in Raya and the Last Dragon seems false; on the contrary, its pleas for unity are honorable and well-intentioned. However, coming as it does in a time where careless fiction and lies are treated as gospel and bad actors are lauded for their divisiveness, is it really any wonder that this film comes off as more of a fantasy than originally intended?

Part of me feels like this movie is reaching for an unattainable goal; the other part of me wants to believe in the best of us so badly, it hurts. But when the former is continually rewarded and the latter seldom sees satisfaction, it’s hard not to become cynical. For all my personal doubt, Raya and the Last Dragon wears its noble heart on its stunningly well-animated sleeve, and as far as its message of understanding and trust… I can only hope that the young have their ears and hearts open.